In city, state money for street maintenance used for more than streets 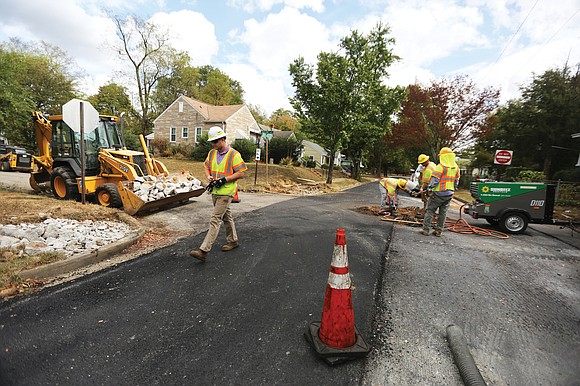 The Fulton neighborhood in the East End is one of the first to get new paving as part of a $15 million program City Hall is undertaking during the current 2019-20 budget year. While one lane on Carlisle Avenue is complete, a city crew on Monday repairs the second lane at the intersection of Carlisle Avenue and Malone Street before repaving. Photo by Regina H. Boone

Every year, Richmond receives about $28 million from the state for street maintenance.

But it turns out virtually all of that money goes to maintain everything about a street but the asphalt, according to Bobby Vincent, director of the city Department of Public Works.

For example, the expense of operating and maintaining the city’s 37,000 streetlights is covered by money from the special fund into which the state street funds are deposited, he said, even though the lights are part of the city Department of Public Utilities operations.

The subsidy from the street funds means that DPU does not have to charge a fee for streetlights, which are supported by no other source of income.

But it is not just streetlights. The street maintenance funds also are used to pay for traffic lights, mowing grass on medians and city easements that are considered part of a street and for maintaining sidewalks, curbs and gutters, he said.

As a result, Richmond has to use its own money to maintain the streets, including repaving. The state dollars are used to fill potholes, he said, but the big dollars for asphalt mostly come from city taxpayers.

While Mr.Vincent is open about the way the city spends street maintenance funds, it is little known to members of City Council and the general public, which often bemoans the condition of city streets.

Councilman Parker C. Agelasto, 5th District, who has been an active member of the council’s Finance Committee, responded, “No,” when asked if he was aware that streetlights were paid for from street maintenance funds.

So did 2nd District Councilwoman Kim B. Gray, who previously served on the Finance Committee and has been a member of the Audit Committee.

The main reason is that the budget issued by Mayor Levar M. Stoney does not detail the way that special funds are spent. That includes grants and state and federal dollars targeted for a specific purpose.

The special funds section of the city’s 2019-20 budget, for example, lists the street maintenance funds under the Public Works heading, but does not provide any information on where the money goes.

Mr. Vincent said the state formula for distributing street maintenance money would need to change if the city were to have additional funds for paving.

He said the formula shortchanges the city in two ways.

Second, the state formula does not take into account the extensive infrastructure that is part of city streets, but is not part of the streets of most counties, particularly in rural areas.

Mr. Vincent said Richmond and other cities continue to urge a change in the state formula. He said the state has started providing some additional funds to the city from other pots of money in recognition of that argument, but the formula has remained fixed.