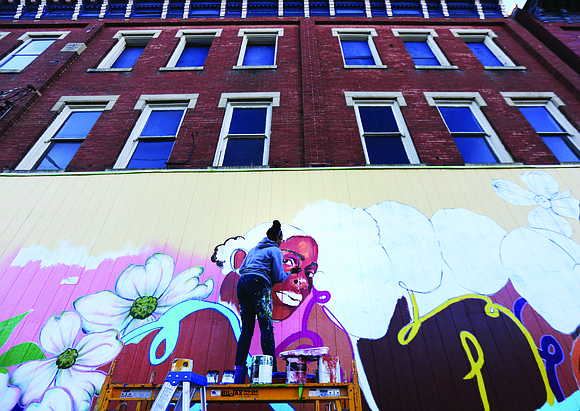 Artist Austin Miles of Petersburg puts the finishing touches last week on this new mural that now decorates Max Market, 1125 Hull St. She is contributing the fine details to the mural that began with a community paint day Oct. 5. The mural is the first of a planned series titled “Brown Girl Narratives” that Kristal Brown, founder and leader of Black Women Cache LLC, is spearheading. This and other murals will help fulfill the goal of the organization, Ms. Brown said, which is “to highlight the lived experiences of black women through media and visual arts.” Next year, the Virginia Commonwealth University doctoral student plans to release a coffee table book focusing on black women and hold other events. She began her company in Richmond after being named a fellow in the Changing the Narrative Collaborative of the Switzerland-based Initiatives of Change and the Kellogg Foundation in this country. Ms. Brown said she was awarded a $10,000 grant from the foundation to “unearth and weave together truth and counter-narratives to Richmond’s history” as part of Kellogg’s Truth, Racial Healing and Transformation effort.