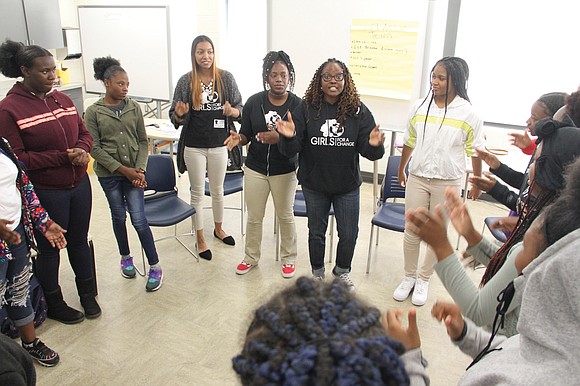 Fourteen eighth-grade girls came together at Richmond’s Martin Luther King Jr. Middle School in a room set up in the round with self-esteem games, prizes, conversation and positive energy as the sounds of Alicia Keys’ “Superwoman” fueled the atmosphere.

Angela Patton, the chief executive officer of Girls For A Change; Girl Action Team Coordinator Anna Gage; and Virginia Commonwealth University intern Tiffany Fox led the young women in a “get-to-know-you” exercise featuring an ice breaker to memorize each other’s names as they introduced themselves.

Next was the “wheel of power,” where they had to take turns answering questions such as, “What is your strength? What is your power?”

Each student trumpeted their “special gift” for leadership.

The hourlong session on Oct. 15 was the launch of a Girls Action Team at the East End middle school as part of an ex- panded mentorship program undertaken by Richmond Public Schools focusing on young women of color.

The program, announced in September by Superintendent Jason Kamras, aims to empower and inspire middle school students by helping them develop leadership skills, learn about social justice and tap into their passion.

Principal Inett Dabney was hopeful and thrilled as the program kicked off at Martin Luther King Jr. Middle School.

“This is another avenue for our girls to build their self-esteem,” Ms. Dabney said. “Our students come to school with a host of challenges. This program will give them an opportunity to understand that they can do anything and are more than a test score.

“In the end, these young ladies will be able to problem solve, not just react to conflict, but to talk things out and communicate. They will be role models for other students at whatever high school they attend,” she said.

Each school will develop a Girls Action Team comprised of 12 to 15 girls. In monthly sessions, they will be led by mentors or coaches who will work with them throughout the school year. Each team will develop and carry out social change projects that they feel are important.

Whitney Wilson, a social worker at Huguenot High School, recruited 20 students, mostly ninth and 10th-graders, including four Hispanic students, who will participate throughout their high school years. They have a bilingual coach.

Prior to the Huguenot group’s initial meeting, Ms. Wilson’s excitement escalated after a large number of students and parents expressed interest in the program at a community meeting.

“I want my action teams to own their project expressing their ideas and needs, not just in the community, but here at school,” Ms. Wilson said. “It could be bullying, developing self-confidence or an array of topics and issues.

“The outcome will be a greater connection to Huguenot High and an opportunity to fellowship with their peers, staff and other community leaders, as well as visit college campuses as they look into their future,” Ms. Wilson said.

Ms. Patton said the goal is for the teams to stay together until the girls graduate, Ms. Patton said. “There will always be openings each year for new girls.”

Many of the South Side schools, where there are large Latino student populations, will have bilingual coaches to ensure meaningful participation, Ms. Patton said.

At the end of the year, the teams will share their projects at a culminating event, she said.

The plan for a mentoring program targeting young women of color was developed by RPS officials at the end of the 2018- 2019 school year, after Brothers United, a mentoring initiative for young men of color, took off with success at George Mason Elementary School.

“Once that happened, we heard from the community that a similar program was needed for young women of color at the middle and high school level,” said Shadae Harris, chief engagement officer for RPS.

“We cannot do this work alone,” Mr. Kamras said. “And we are grateful for partnerships, such as Girls for a Change, who continue to show up for our students.”