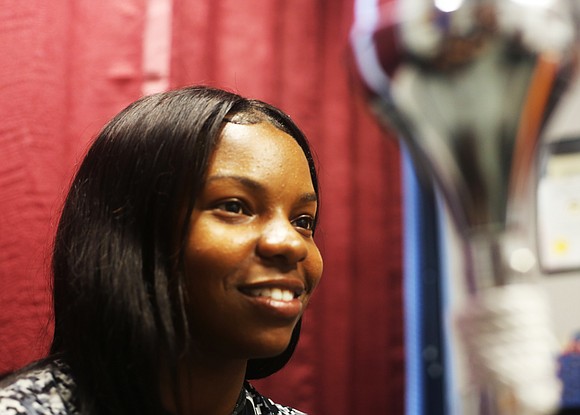 But the smile disappeared last week as she pulled her hair into a ponytail and focused on the students standing before her playing their instruments — clarinets, cymbals, drums, flutes, trombones and trumpets.

This was band practice, but not just any band.

This was Virginia Union University’s 100-member Ambassadors of Sound Marching Band and the sound had to be loud and the moves tight.

Ms. McGhee made sure of that.

The 20-year-old junior from Portsmouth, who is majoring in psychology and criminal justice, is the first female drum major for the VUU Ambassadors of Sound, a group that started six years ago after the marching band went on a hiatus at the private school.

Her role as drum major is being shared with Nathan James, a VUU senior who graduated from Highland Springs High School in Henrico County.

He played the trumpet in the Highland Springs marching band; Ms. McGhee has been a majorette with the VUU Maroon Elegance twirlers for the past two years. She has been commanding a baton since age 11.

Together, she and Mr. James are known as Mr. Maroon and Miss Steel, a play on VUU’s school colors.

Dressed in matching maroon and gray shorts and T-shirts for band practice, the co-drum majors were expertly conducting the Ambassadors of Sound, leading the band in unison.

Michael Jackson’s “Off the Wall” segued into Beyoncé’s “Before I Let Go.”

While this was only a rehearsal at Barco-Stevens Hall on the VUU campus, Ms. McGhee said the band will be ready for its debut Saturday, Sept. 7 — game day — when the VUU Panthers take on Hampton University in Hampton.

“Being in the band, you learn something every day,” Ms. McGhee said, noting that rehearsals generally last three to four hours daily. “Yesterday we went through the drills and all the moves. Today we’ll clean up everything.”

At 5-foot-2, Ms. McGhee said she first considered becoming a drum major while in the Mighty Marching Greyhounds band at I.C. Norcom High School in Portsmouth.

Through the years, she joked about trying out for the drum major position at VUU, but didn’t muster the courage to do so until last spring.

In addition to completing all the administrative requirements for the audition — application, letters of recommendation and transcripts — Ms. McGhee also had to mentally prepare herself.

Being the middle child among four siblings helped, she said.

“Growing up in a house where people are tough critics, I’m used to it,” she said.

Among the skills on which she was evaluated were learning to conduct the band, performing dances and steps with precision and being a team player. Five other students vied for the position as well, including another female student.

She smiles when she describes her reaction to being selected as co-drum major.

“It’s cool!” she said. “I feel a lot of different ways about it, but it’s an honor, especially because it’s never been done before.” 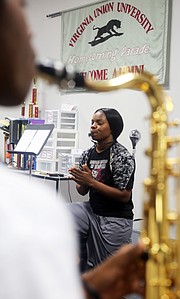 The VUU junior from Portsmouth leads a rehearsal last week, perfecting the moves and the sounds.

Fayesha Cousins, the marching band’s director, acknowledges that another female drum major, Mellonie Anne Boyd, known as “Mitey Mite,” led the university’s marching band in 1989. But several years went by in which VUU had no marching band.

Six years ago, the Ambassadors of Sound Marching Band was started, and Ms. McGhee is taking her place in band and university history.

“They teach, organize, conduct band maneuvers, dance blocks and steps and select songs. They keep us relevant,” she said.

Ms. Cousins also credits Ms. McGhee’s ability to listen, along with her consistency and persistence in pushing through challenges, with helping her land the top spot.

“I can’t tell the difference between her and the boys,” Ms. Cousins said. “She’s always sharp and intentional about everything.”

Mr. James, who also auditioned last spring, welcomes working with Ms. McGhee, whom he views as a younger sister.

“My goal is to leave my legacy,” he said. “I’ll be graduating in May. I want to leave a mark with Diamond. Yes, I’ll be sharing the light with her, but we have our own spotlight. We’re on the big spotlight, which is the field.”

Accustomed to being in the spotlight as a twirler, Ms. McGhee said she feels excitement rather than pressure regarding her new role. Because she is a fast learner and her own toughest critic, she noted that the key for a good performance is to simply be yourself.

“I have always received praise for my poise and being comfortable on the field,” she said.

While the band will consume much of her focus in coming weeks, Ms. McGhee recognizes that her studies also will demand attention. She said she plans to attend graduate school after earning her degree. Ultimately, she wants to become a counselor and life coach for women of color.

Meanwhile, the stage is set for women to follow in her footsteps with the Ambassadors of Sound.

“It is 2019 and women everywhere are on the rise,” she said. “Everything in the world has always been male dominated, so I think that it is time for women to step out from the shadows and show that we can dominate as well.”