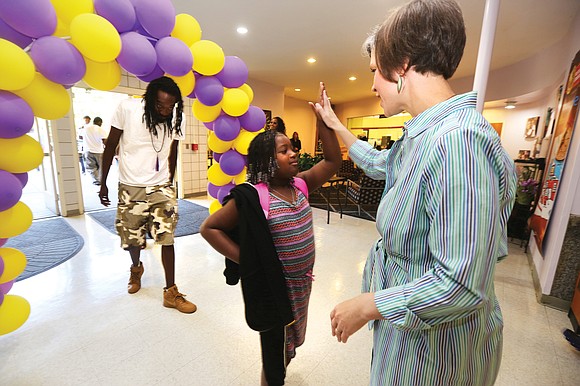 Walking through a welcome arch of balloons at Westover Hills Elementary School, third-grader Kemdyl Grevious is greeted with a high five from Principal Allison El Koubi, as she and her father, Dylan Grevious, arrive Tuesday for the opening day. Photo by Regina H. Boone

Richmond Public Schools students, parents, teachers and officials were up bright and early and full of optimism Tuesday morning for the beginning of the new school year.

“I love the high expectations that we have here at RPS,” said Westover Hills Elementary School Principal Allison El Koubi. “If we want our kids to succeed, then we need to have high expectations and make sure that we’re teaching grade-level content.”

That positivity was echoed miles away on the grounds of E.S.H. Greene Elementary, a school whose opening was marked by transition — externally in the form of the new school building under construction behind the main building and adjacent trailers, and internally with the hiring of Dr. Juvenal Abrego-Meneses to serve as the school’s principal.

“I expect nothing but the greatest and the best for students at RPS,” said Greene Elementary Assistant Principal Katrina Holmes, standing a few feet away from an auditorium that earlier had served as an ad-hoc dispensary for hundreds of student backpacks.

Westover Hills and Greene elementaries, like a few other city elementary schools, opened a half-hour earlier than the rest of the district at 8:30 a.m., with participating schools now closing at 3:15 p.m. as opposed to 3:40 p.m.

The change was among a suite of developments going into effect this year, including the addition of 10 new electives, such as cooking, chorus and dance, for high school students; solar panels added to the roofs of about 10 schools; paper lunch trays to promote eco-friendly measures; and moving truancy hearings from courts to Martin Luther King Jr. Middle School.

Later on Tuesday night, the Richmond School Board voted unanimously to purchase 42,000 new Chromebooks for $1.29 million as part of a partnership with T-Mobile that will provide the laptops and personal internet-enabled devices to sixth-grade students to use throughout their time in middle school.

The shift to an early opening seemed to be an easy adjustment for the schools. Westover Hills staff, faculty, members of various partner groups and others assembled with Ms. El Koubi to greet new and returning students and parents in the school’s lobby with high fives, hugs and donuts.

“I’m really excited. I think we’re going to have a great year,” said Bryce Lyle, who serves as a fundraising team leader for the Westover Hills Beaver Boosters, and whose daughter, Claire, is a third-grader at the school.

The day was marked with an enthusiasm for the future of RPS from those involved, stretching from Westover Hills to Greene Elementary and beyond.

Observing a student transitioning back to Greene Elementary from RPS’ Thirteen Acres School, Melanie C. Brown, who works with the special school, views the early opening as providing students with “the opportunity to get a good start to the day and then be able to have some time to do homework in the afternoon, study and still have a little playtime in the evening.”

“Obviously we have a lot of work to do,” Mr. Karmas said, “but I do feel that we’re heading in the right direction.”

While the day would also see issues with transportation and rooms without working air conditioning, these bumps were a small break in the upbeat mood, and a far cry from the setbacks, upsets and missteps that hung over previous school years.

Last September, only 19 of Richmond’s 44 public schools were fully accredited under new state standards set by the Virginia Department of Education used to review the 2017-2018 school year. One of those schools, George Washington Carver Elementary, was withheld from accreditation in a unanimous decision by the Virginia Board of Education after a Standards of Learning test cheating scandal came to light in June 2018, leading to a series of firings and a lawsuit still underway by former Carver teachers against Mr. Kamras and the School Board as the 2018-19 school year began.

Also this year, RPS continues its three-year streak of appointing new principals to nearly a quarter of its schools. Dr. Abrego-Meneses at Greene Elementary is one of 14 new principals hired for the new school year.

The weight of Richmond’s educational troubles also has been a bitter start to the Dreams4RPS initiative, a five-year plan to improve city schools that begins its second year this week. RPS and city officials opted to focus on the success RPS managed to accrue the previous school year and the efforts to improve their “core business,” as Mr. Kamras described it during a news conference Tuesday morning in the Westover Hills school library.

“We can’t expect greatness from our students if we don’t ask greatness of them,” Mr. Kamras said. “If we continue to set the bar high for our students, we’ll see that they will meet and exceed our expectations every time.”

Mr. Kamras later reported at the School Board meeting that, on opening day, there were 13 teacher vacancies across RPS, down from 18 vacancies last school year.

Mayor Stoney, for his part at the news conference, emphasized the role RPS plays for those with no other options for education, both in providing a quality education and the means to a better life and future.

“When I walked into some of the homes of residents of this great city, we saw that this was their only shot,” Mayor Stoney said. “There are no other alternatives but Richmond Public Schools. And what we have to do is ensure that this shot is the moon shot.”

The recognition of that importance can be seen in the 12 new teachers hired for English as a Second Language courses and students. ESL has proven to be a growing matter of importance for RPS as its student body continues to diversify, with Dr. Abrego-Meneses’ hiring a direct result of parents’ concerns about the leadership of Greene Elementary, where 90 percent of the families with enrolled students speak Spanish as their native language, according to Mr. Kamras.

“There’s a lot more we need to do and a lot more we’re going to do over the next several years,” Mr. Kamras said. “Just sending them to high school and saying good luck is not a recipe for success.”