The marches were part of the Global Climate Strike organized through the efforts of 16-year old climate activist Greta Thunberg, whose advocacy has stretched from her native Sweden to the United States in the past year.

At a United Nations Climate Action Summit on Monday in New York, Ms. Thunberg drew worldwide attention as she chastised world leaders and legislators for their response to a growing climate crisis that scientists say could end in disaster in only 11 years.

Hundreds of thousands of people in cities and towns across the globe participated in marches and rallies on Friday to bring atten- tion to the crisis and the need for action.

“We don’t want to tell our children or younger individuals that they won’t have a sustainable life in the future,” said Zamir Ticknor, a high school student from Northern Virginia as he spoke on the grounds of the Virginia State Capitol on Friday afternoon.

He was surrounded by protesters, many of them students who had walked out of their schools for the day.

Mr. Ticknor, who serves as outreach director for the Virginia Youth Climate Strike, was joined by an assortment of groups, including The Sunrise Movement, the Chesapeake Climate Action Network, the Citizens’ Climate Lobby and Green New Deal VA.

Like Ms. Thunberg, protesters in Richmond stressed the need for radical, transformative approaches to ensuring sustainable living, instead of incremental policies or outright denial of climate science. The solutions raised included passing a Green New Deal, adopting more eco-friendly lifestyles and halting construction of the Atlantic Coast and Mountain Valley natural gas pipelines, both of which are to cross Virginia.

The strikers also shared her criticism of the harm caused by politicians, corporations and older generations that didn’t take steps to address climate change, leaving the youths of the world to face the consequences.

“All of our lives are at stake,” Mr. Ticknor said.

He shared his fear about how climate change already has impacted his extended family in Bangladesh, along with people in other vulnerable nations, “due to our inaction as a country to reduce our carbon emissions.”

“This is why we need to act right now,” he said. 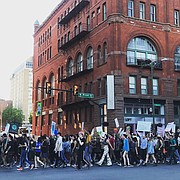 It was a message protesters took to more than one center of power in Richmond. As most of the crowd continued to occupy Capitol Square, a smaller group broke off to protest outside the Dominion Energy building on Cary Street in Downtown.

Later at 5 p.m. Friday, protesters gathered in Monroe Park to march to the front entrance of City Hall. The number of marchers occupied an entire block of Broad Street’s eastbound lane.

“We are and will remain committed to a future worthy of the next generation, one that harness not only ecological wisdom and neighborly love, but also responsible stewardship for a just and healthy Virginia,” said Kendyl Crawley Crawford, director of the Richmond-based Virginia Interfaith Power and Light, as she addressed the crowd outside City Hall.

Throughout both protests, signs and banners emphasized the gravity of the issue, and the role of those in power in contributing to the dire situation. “There is No Planet B,” “Time is Running Out,” “Life Over Profit,” “Climate Leaders Don’t Build Pipelines,” “Your Profit Margins Are Killing Us” and “Our House Is On Fire,” their signs stated.

Demanding Richmond officials join cities across the world in declaring a state of climate emergency, the group outside City Hall ended their protest with a 5-minute “die- in,” where protesters stretched out on the walkway and sidewalk like they were dead, creating an image meant to spur Richmond Mayor Levar M. Stoney into action.

“I want him to wake up in the morning and see images of us all out here working together, demanding that Richmond be part of this change,” said Barry O’Keefe, an organizer with Extinction Rebellion Richmond.