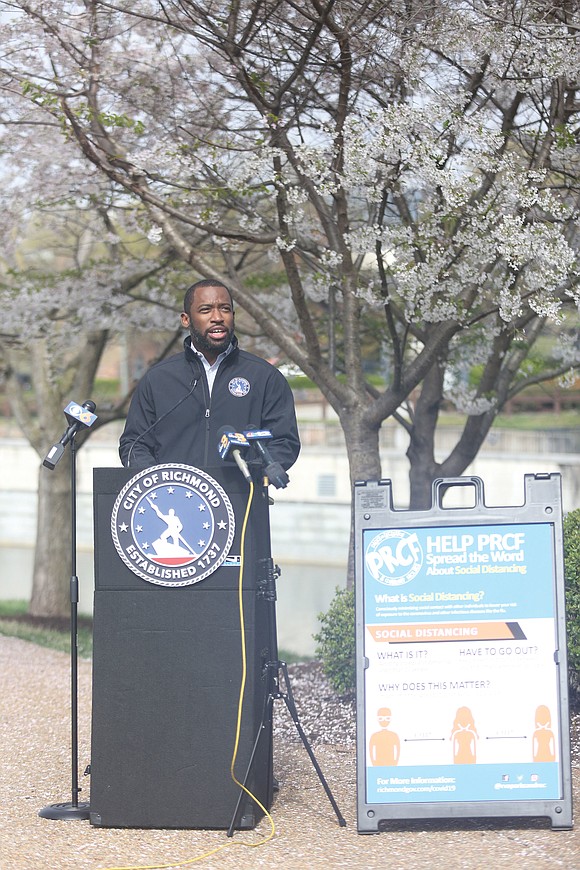 Richmond residents would not see any hikes in utility rates that would have added $5.56 a month to the average bill beginning July 1.

Current city workers would not have to worry about layoffs or furloughs for now, but they would not see an increase in their pay either.

City departments would only be allowed to fill positions deemed critical and would have to eliminate all discretionary spending for items like magazines, training, travel and conference attendance.

And Richmond Public Schools would see its contribution from the city shrink by $10 million from the proposed increase of $16 million.

Backed by what appears to be a majority consensus of City Council, Mayor Levar M. Stoney on Monday advanced large and small amendments to his budget proposal for the upcoming 2020-21 fiscal year — including jettisoning an initiative to boost the pay of public defenders and plans to hike funding to non-city organizations and nonprofits.

The goal: To enable the city to maintain a financial balance in steering through the uncharted waters of the coronavirus recession.

In a briefing for City Council whose members mostly met remotely, city Budget Director Jay A. Brown said initial projections suggest that city revenues in the new fiscal year that begins July 1 would shrink at least $38.5 million — or about 5 percent.

The biggest element of the spending plan — the general fund that pays for city operations — originally was projected to rise to $782.6 million, but is now anticipated to fall to $744.1 million.

The adjustments are similar to those being taken by surrounding counties amid the looming downturn, with Henrico County slashing $100 million and Chesterfield County cutting $50 million from anticipated revenues for the next fiscal year.

Dr. Brown cited projected revenue declines of 5 percent to 15 percent on an array of taxes, including those imposed on real estate, vehicles, restaurants, hotel rooms, concert tickets, business income, plus other revenue reductions.

But he said there are still too many unknowns, including the amount the city will receive in federal support, when the pandemic will end and how quickly Richmond might bounce back — likely requiring at least monthly budget reviews and adjustments.

Still some people, including at least two who might challenge Mayor Stoney in the November election, believe City Hall is too optimistic about how quickly a recovery will come after the pandemic ends and that far deeper cuts in city spending are needed.

Councilwoman Kim B. Gray, 2nd District, an announced mayoral candidate, said she believes Mayor Stoney’s budget amendments are based on a “best case scenario” but that the city should be presenting a budget reflecting “a worst case scenario.”

Others on council, including Vice President Chris A. Hilbert, disagreed.

Ms. Gray, for example, is forecasting a far bigger drop in meal tax revenues than the city, based on her conversations with restaurant owners.

Dr. Brown said the city is projecting that revenues would shrink only $4.7 million from the previously anticipated $47 million, which includes about $9 million to pay the cost of three new school buildings.

That’s “unrealistic,” according to industry veteran Michelle Williams, co-owner of the 25-year-old Richmond Restaurant Group, which has closed all eight restaurants and furloughed more than 400 employees.

She projects that as many as 150 to 200 of the city’s more than 800 restau- rants will never reopen as result of the financial losses.

Those that do, and she is preparing for her restaurant group to be among them, will be fortunate to do 50 percent to 60 percent of their pre-virus business in the first year after the threat ends, she said. It will take time to reopen, she said, and she anticipates a drop in patron numbers, in part due to the huge job losses that will make eating out a luxury for more people, new wariness about being in crowded places and a virus-induced rise in home- cooked meals.

Ms. Williams acknowledged that national fast food operations that promote carryout service appear to be attracting more customers, but she said the sit-down restaurants that put Richmond on the national food map are starving if they are managing to stay open. She said those operations are seeing 75 percent to 90 percent reductions in business in providing delivery and carryout service.

Instead of considering the amount of tax to be gained, Ms. Williams said, the city ought to be offering help to this important sector of the city’s economy and waive collection of meals taxes at least through June to allow the money to be used by restaurant owners and operators to pay rent, bank loans and cover other survival costs.

So far, Mayor Stoney has proposed waiving penalties and interest on late payments between April and June, far short of what Ms. Williams believes is needed.

While her group currently has the financial strength to keep the city’s tax dollars separate, she said others are facing the terrible choice of spending the meals tax money to protect their restaurants or paying it to the city and going out of business.

“All of us need forgiveness on the taxes,” she said.