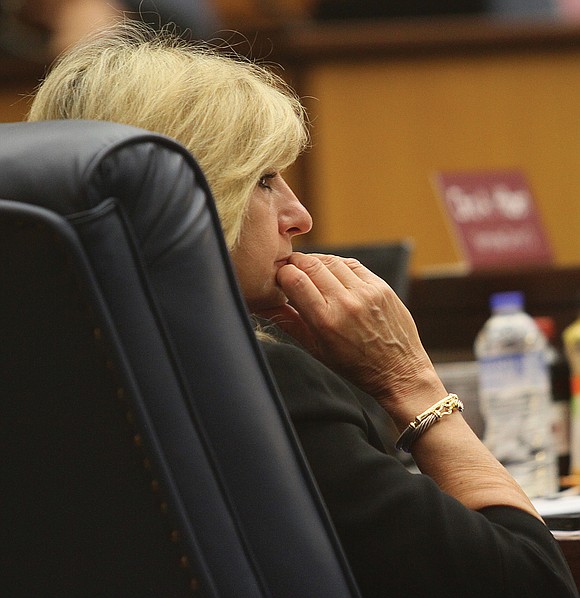 As a longtime member of Richmond City Council, Reva Trammell has come to be known as a reliable and outspoken advocate for the poor and elderly in the city’s 8th District. She has a reputation for challenging her political peers to govern and enact policies that protect the least powerful.

So she was stunned recently when a photo she posted on Facebook that included a “Mammy Jar” sitting atop her kitchen cabinet went viral, igniting a Twitter storm about the jar, its meaning and her racial insensitivity.

A “Mammy Jar” sits atop a kitchen cabinet in a photo City Councilwoman Reva M. Trammell posted of herself and a friend on her Facebook page. The ceramic figure was circled in the photo by someone who saw the post on social media.

The “Mammy Jar,” an Aunt Jemima-like caricature, is a ceramic figure of an obese black woman wearing an apron, with a kerchief on her head and her hands on her hips.

The photo, enlarged to focus on the jar, was tweeted by RVA Dirt, and has drawn comments from scores of people, including Ms. Trammell’s City Council colleague, Dr. Michael Jones, 9th District, who said she needed to account for the racist iconography in her home.

Ms. Trammell issued a statement of apology. She declined a Free Press request for an interview.

“The figurine was given to me about 35 years ago and it has been on top of the kitchen cabinet ever since,” her brief statement read. “I never thought much about it, but I do now realize that it is a hurtful item to many people,” she stated. “For that reason, I have taken it down and discarded it. I apologize for the hurt I may have caused.”

Mayor Levar M. Stoney, whom Ms. Trammell often publicly criticizes during City Council meetings, also commented on Twitter, saying: “I was raised by a woman who worked in the homes of white people. This image isn’t just ‘hurtful to many people.’ Call it what it is — just plain racist against Black people. Now that you know better, do better.”

Since its appearance after the Civil War in the mid-1800s, the mammy has been used as a stereotype of the African-American woman, according to arts and culture, history and sociology authorities.

The mammy character “served the political, social and economic interests of mainstream white Americans” before the end of legalized racial segregation, according to studies of racist artifacts by the Jim Crow Museum of Racist Memorabilia at Ferris State University in Michigan.

The mammy has been produced in cookie jar forms, as ashtrays, toys, postcards and candles, among other things. Once discarded as unwanted, undesirable memorabilia of a bygone era, it is now considered by some to be a prized collectible like the black lawn jockeys rooted in the era when many jockeys were black men.

Ms. Trammell’s possession of the mammy cookie jar with its racial history is not so unusual, said Dr. David Pilgrim, an applied sociologist and creator of the Jim Crow museum who also serves as chief diversity and inclusion officer at Ferris State University.

“Hundreds of thousands of Americans have racist objects in their homes” Dr. Pilgrim told the Free Press, noting that includes well- known personalities around the nation who own mammy figures.

“People collect for different reasons,” Dr. Pilgrim said. He offered a list of reasons why mammy figures are considered desirable, ranging from their rising value in recent years to harvesting the objects to destroy them to gathering them for nostalgia’s sake.

“For some people, mammy represents a non-offensive, almost nostalgic reminder of the past,” said Dr. Pilgrim, an Alabama native who grew up in New York City’s Harlem, graduated from Jarvis Christian College in Texas and earned his Ph.D. at Ohio State University. “For me, it symbolizes the residue of enslavement and racial segregation.”

He said he would not make any assertions about Ms. Trammell whom he does not know nor has he ever met, noting that he has read media reports about her having a Mammy Jar.

“Good people do bad things, and some of the bad things they do are racist,” he said.

“The question is how humble we are ... A person is judged by the totality of their work,” he said, not an act itself. “Good people make mistakes,” he said. 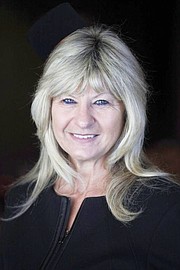 “The way I look at it is it’s an opportunity to have a deep, even painful, discussion about race.”

In her brief statement, Ms. Trammell did not suggest a need for more conversation about race in her majority black district.

“My track record is one of deeply respecting my African-American 8th District family and all others,” she stated. “I dearly love all of my citizens and I am dedicated to serving the fine citizens of Richmond’s 8th District of all races and backgrounds.

“I pray that everyone stays safe during this Coronavirus pandemic. Let’s move forward together.”