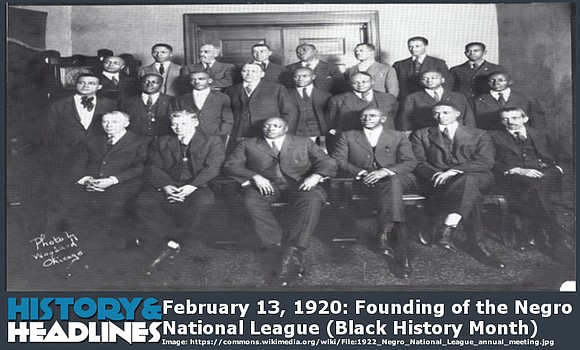 Professional baseball gave a much deserved tip of the cap to the Negro Leagues last Sunday, honoring the league’s 100th anniversary.

All 32 major league teams saluted the men and memories from an era prior to 1947 when Black players weren’t allowed to compete against white players.

On Aug. 16, players, managers, coaches and umpires all wore a symbolic patch saluting the 100th birthday of the Negro Leagues. Negro Leagues logos also were placed on the bases and scorecards.

Partnering with Major League Baseball for the commemoration was the U.S. Conference of Mayors.

The event originally was scheduled for June 27 but postponed because of the pandemic. 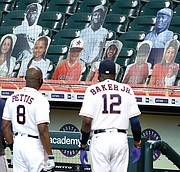 Houston Astros third base coach Gary Pettis and manager Dusty Baker Jr. look into the stands at photo cutouts of former Negro League players during a celebration of the 100th anniversary of the Negro Leagues before a game against the Seattle Mariners on Aug. 16 at Minute Maid Park.

The seed for the Negro National League was sewn Feb. 13, 1920, when a group of team executives met in Kansas City, Mo. Rube Foster, a native Texan who had been a star pitcher and team owner previously, served as the league’s first commissioner. Foster’s Chicago American Giants won the first three championships from 1920 to 1922.

Prior to that, all-Black baseball had been mostly a barnstorming activity with little staying power.

The Eastern Colored League was set up in 1937 as a second Negro “Major League.”

The Negro League World Series—also called the Colored World Series at the time—was played 1924 to 1927 with the National League champ facing the Eastern winner.

From 1942 to 1948, the World Series pitted the National League against the American League, which began in 1937.

Other Black players in the game-changing 1947 season were Larry Doby with Cleveland, Dan Bankhead with the Dodgers and Hank Thompson and Willard Brown with the St. Louis Browns.

Roy Campanella joined the Dodgers and Satchel Paige was added by Cleveland in 1948.

Then came Minnie Minoso and Luke Easter, both with Cleveland, and Don Newcombe with the Dodgers in 1949.

From that point on, the Negro Leagues, as a bona fide Major League, began to fade although many continued to barnstorm during the 1950s. The post-Robinson Negro Leagues were considered to be of minor league quality.

The Negro Leagues officially stopped operations in 1962. The Indianapolis Clowns were the only fully organized franchise left in 1966. By then, the independent, barnstorming Clowns had become more of a humorous sideshow than a competitive outfit.

Most Negro Leagues alumni living today played in the 1950s. Mays, 89, played with the Birmingham Black Barons from 1948 to 1950 before signing with the New York Giants.

Aaron, 86, played with the Indianapolis Clowns in 1952 prior to joining the Boston Braves.

Banks, a 14-time All-Star and two-time MVP with the Cubs, was said to be the last Negro League player to sign a big league contract and go straight to the majors.

Here are the standings from the Negro National League’s groundbreaking 1920 season.

Notes: The Cuban Stars and Chicago

Giants were “traveling teams” with no home games.

Some games ended in ties.

The standings may have included games against barnstorming teams. Some games were never reported.

In the same season, the Negro Southern League, which was considered a minor league, began with teams in Knoxville, Ky., Montgomery and Birmingham, Ala., Atlanta, New Orleans and Jacksonville, Fla. The Knoxville Giants prevailed with a 55-21 record.