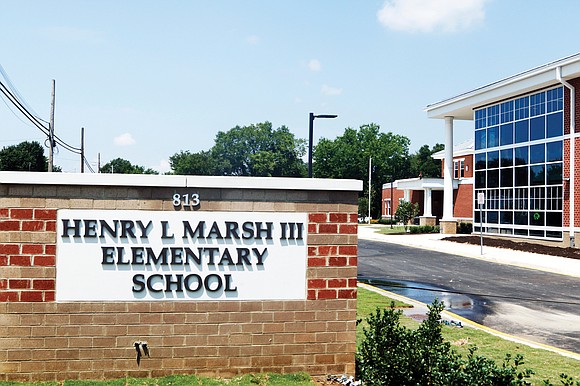 the new $40 million Henry L. Marsh III Elementary School at 813 N. 28th St. is one of three new city school buildings that are ready for use but remain closed as students will have online classes this fall. No concrete plans have been made on whether this or any other school building will be used for day care. Photo by Regina H. Boone

Sharonda Robinson hoped against hope that Richmond Public Schools would reopen this fall so her sons, ages 6 and 8, could be in school taking classes while she went to work.

But the RPS decision to hold classes only online this fall means the 32-year-old single mother might have to give up her job as a retail store clerk to stay home to care for the boys and help them with online classes.

“While school has been out, I was able to leave my children with my grandmother and sister — she’s disabled — so I could go to work.

“But this virtual learning stuff is not their thing, and I do want my kids to be learning,” Ms. Robinson said. “If something doesn’t change fast, I’m gonna have to be home. I’m barely making it now, and day care is way too expensive.

“And if I have to stay home, where will I get the money to support them and pay the rent?”

Ms. Robinson is one of many — the number is unknown — who are facing this impossible choice — work or care for children who are too young to be left at home alone.

The issue is a huge one for the Richmond area, which data analytics firm Smartest Dollar ranks third in the nation among medium-sized metropolitan areas in the percentage of households with children under 14 years of age who do not have a parent able to stay home.

Across the area, nearly 50 percent of families are in that situation, the report indicated. And the percentage is even higher in Richmond, where single-parent households are more prevalent and where many work in jobs that do not provide enough income to pay for private day care.

Even those families who can afford private day care may lose that option. A newly released survey that ChildSavers, United Way and other partners conducted found that 71 percent of child care providers in the Richmond area might shut down in six months because rules growing out of the pandemic mean they cannot take in enough children to cover their costs.

That’s why alarm bells have been ringing since mid-July at City Hall, where officials created a task force to craft a major day care program that could serve huge numbers of children.

Currently, Richmond Public Schools enrolls about 17,000 children between pre-kindergarten and ninth grade, after which children are thought to be old enough to look after themselves.

“We’re building this plane while we’re trying to fly it,” said Christopher Frelke, director of the city Department of Parks, Recreation and Community Facilities. He is leading the task force to develop a large and affordable full day and after-school child care program.

The task force includes city agencies as well as nonprofits like the YMCA, Next Up, Higher Achievement and area Boys & Girls Clubs, including the Salvation Army’s separate operation.

The plan in the works calls for providing free day care for working families with incomes up to 200 percent to 300 percent of poverty, with others paying on a sliding scale based on income.

This week, the initiative took a step to find how much demand there will be for the service.

On Wednesday, Mayor Levar M. Stoney released an online survey he hopes parents like Ms. Robinson will take to give the city more information. The survey is posted on the first page of the city’s website, Richmondgov.com.

The survey was posted as Mayor Stoney began lobbying the Richmond School Board to assist by allowing the city and third-party providers like the YMCA to use the closed city school buildings.

School systems in Henrico and Chesterfield counties already have granted permission for their buildings to be used for day care in those jurisdictions. But Richmond Schools Superintendent Jason Kamras has resisted and so have some School Board members.

However, Mr. Kamras said in a statement released on the RPS website Wednesday that RPS is partnering with the city, various nonprofits, churches and other organiza- tions “to organize a network of emergency child care services for working families who have no other options.”

The School Board went to virtual learning to safeguard teachers, staff and its largely Black and brown student population. But RPS made no provision to aid parents who must work and possibly face financial ruin if child care is not available

The School Board, after debating the issue Monday, set a special meeting for 6 p.m. Monday, Aug. 31, — just eight days before the start of school — to consider the issue again.

The mayor, in a letter issued ahead of Monday’s School Board meeting, said the city would initially put up $3 million. The funding could be expanded now that Richmond has received a second $20 million payment from the federal CARES Act to assist with pandemic-related costs. Care for the children of front line workers is one of the items that the funds can be used for.

As Mr. Frelke and others have noted, Richmond has few buildings that can match the capacity that schools offer for daytime day care.

By opening schools, providers would have the space to keep children properly distanced and to keep numbers small enough in each space to minimize the risk of COVID-19. The YMCA gained experience in offering camps during the summer, officials said.

After the virus hit and schools were shuttered, the School Board allowed the city to use Carver Elementary School as a site for day care for children of bus drivers and first responders, but fewer than five children attended.

During the meeting, School Board Chair Linda B. Owen, 9th District, wanted to know more about the possible program. If school-age children are being served, “will there be someone in the building with the capacity to facilitate virtual learning?” she asked.

Some members of the board, including J. Scott Barlow, 2nd District, wanted to see a proposed memorandum of understanding. “If the standards are not met by the city, will RPS be able to terminate the agreement?” he asked.

City Councilwoman Stephanie A. Lynch, 2nd District, was the first elected city official to raise the issue nearly two months ago. She is nervous about whether RPS will allow school buildings to be used, including three new schools on which construction was just completed.

Ms. Lynch has heard from mothers in her district who are near desperation.

“These are challenging times, and there are no perfect solutions,” Ms. Lynch said. “I am encouraged by all the collaboration that is happening and by all the people who have contacted me who want to be involved in tutoring.

“My biggest concern is for the achievement gaps that could widen for those kids already at risk,” Ms. Lynch continued. “We need to keep those kids in the forefront of our efforts. We cannot continue to have them keep falling behind.

“I have my fingers crossed this will all work out.”