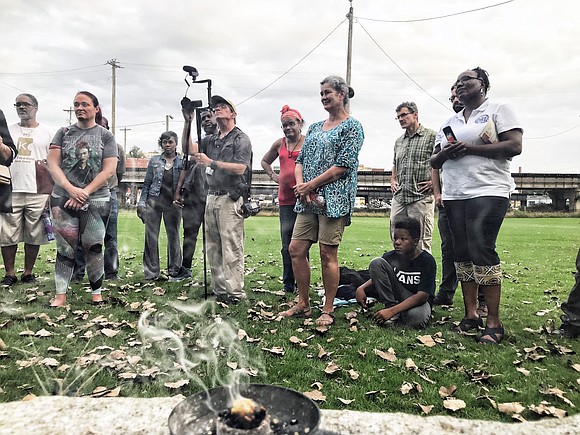 City Hall is moving to expand the space designated for a long talked about memorial to slavery in Shockoe Bottom well before development begins on what the city has dubbed the Enslaved African Heritage Campus.

Mayor Levar M. Stoney’s administration has made a deal to purchase from the Loving family 1.75 acres contained in 12 parcels, including the vacant brick building that once housed Loving’s Produce company at 1601 E. Grace St. that will extend the heritage campus to East Franklin Street.

An ordinance laying out the purchase is on track to clear the city Planning Commission next Monday, Jan. 4, and to pass a supportive City Council on Monday, Jan. 11, allowing for an appraisal to determine the final price the city is to pay the Loving family for the property.

The city Assessor’s Office values the 12 parcels collectively at $2.4 million for tax purposes, but the administration has indicated in paperwork provided to City Council that the price could be higher.

The property has been earmarked for a future 665-space parking deck that would serve the Enslaved African Heritage Campus and the adjacent retail-restaurant area.

Hopes are high that future investment in the project will result in a significant history attraction boosting visitation to the Shockoe Bottom area once the pandemic ends.

More than 10 years have passed since the vision of such a heritage site began percolating as a way to recall Richmond’s forgotten role as a major center of the slave trade.

In late July, Mayor Stoney announced that the city finally would move forward on the 9-acre heritage development, which is to include a museum and memorial park and encompass historic 18th- and 19th-century burial grounds for enslaved and free Black people at 15th and Broad streets and at 1305 N. 5th St.

Since then, the council has approved the mayor’s request for $1.7 million to start the project, all of which is to go to the land purchase, according to the administration.

In his announcement five months ago, the mayor stated that the next five-year capital budget that he will send to City Council in March would include funding for design and development of the heritage campus the administration now estimates would cost $38 million.

That includes $16 million for design and construction of the parking deck and $17 million for development of the heritage campus whose major feature would be a museum-style project set around the site of the infamous Lumpkin’s Jail.

Lumpkin’s Jail was a slave holding site so notorious that it was called the Devil’s Half-Acre. It operated until Union victory in the Civil War. Ironically, after the war, Lumpkin’s Jail became an initial site for a school for newly freed Black people that eventually became part of Virginia Union University.

Along with the museum, the $17 million is to be used to create the park that is to fill a two-block area bounded by Broad, Grace and 17th streets and the railroad tracks leading to and from Main Street Station.

That would bring to fruition a space for which Phil Wilayto and Ana Edwards, organizers of the Virginia Defenders for Freedom, Justice & Equality, have spent more than seven years advocating. They describe the two blocks that are now asphalt parking lots as sacred ground that should be transformed into a place of reflection and remembrance to go along with the development of the museum at the Lumpkin’s Jail site.

The development also has the support of the state, which previously set aside $9 million for the heritage initiative more than six years ago during the administration of Gov. Bob McDonnell.

Current Gov. Ralph S. Northam is proposing to add another $9 million, according to his staff, in the amended state spending plan for 2020-21 that he sent to the General Assembly for consideration in January.