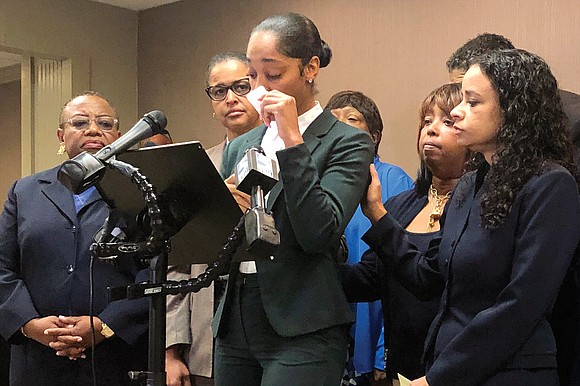 Jazmyne Childs, center, cries during a news conference in Raleigh, N.C., in September as she describes the sexual harassment she said she endured while working for the North Carolina State Conference NAACP. She filed a $15 million lawsuit Monday against the national NAACP, which she alleges condoned the behavior. Photo by Martha Waggoner/Associated Press

RALEIGH - A woman who said she repeatedly told the national NAACP that her supervisor in the North Carolina conference had sexually harassed her is suing the national group and her former boss.

Jazmyne Childs is seeking at least $15 million for her emotional and mental distress that she says the civil rights organization condoned through its inaction.

In the lawsuit filed Monday in Durham County, N.C., court, attorneys for Ms. Childs said she was sexually harassed by the Rev. Curtis Gatewood when she was youth and college field secretary for the North Carolina State Conference NAACP in 2017. She suffers from depression, anxiety, nervousness and insomnia, the lawsuit says.

The lawsuit seeks more than $5 million in compensatory damages and more than $25,000 in punitive dam- ages on each of three claims: battery, assault and intentional infliction of emotional distress.

NAACP officials and Rev. Gatewood did not immediately respond to a request for comment from The Associated Press.

The national NAACP knew about the harassment when it received a report from an outside investigator in October 2017 that concluded that Rev. Gatewood harassed Ms. Childs, yet took no action, the lawsuit stated.

The NAACP “is liable for the misconduct for Gatewood because the National NAACP ratified Gatewood’s conduct,” according to the suit.

Rev. Gatewood, who was interim field director and managed the state conference NAACP staff, “suddenly resigned” in June 2017, the lawsuit said. However, he continued to show up at events attended by Ms. Childs, even after receiving a cease-and-desist letter in December 2017, the lawsuit said, leading to her resignation.

Ms. Childs, who was hired in January 2017, resigned in August 2018 because she feared Rev. Gatewood “would continue to stalk and intimidate her,” the lawsuit said.

The lawsuit stated that Ms. Childs, now 27, first became fearful of the now 60-year-old Rev. Gatewood on Feb. 6, 2017, when he closed an office door as they met to discuss a rally. “While talking to her, he kept looking her up and down in a sexual and intimidating manner,” the lawsuit says. “Ms. Childs was afraid.”

Similar harassment continued over the next few months, the lawsuit said.

On May 2, 2017, Ms. Childs was in a conference room with the lights off as she prepared for a co-worker’s farewell party, according to the suit. “Suddenly, she felt someone’s breath on the back of her neck” and then felt someone press against her from behind, the lawsuit said, adding that Rev. Gatewood was behind her.

“Why are you hovering over me? That’s gross. Move,” Ms. Childs yelled, according to the lawsuit. Rev. Gatewood said he was looking for a receipt and left the room, it said.

Ms. Childs described the harassment at a news conference in September after she had written several letters to national NAACP President and Chief Executive Officer Derrick Johnson. She wrote him in June and twice in September and sought a disciplinary hearing for Rev. Gatewood in her second letter. The NAACP responded to none of the letters, she said.

Mr. Johnson suspended Rev. Gatewood from membership the day after Ms. Childs’ news conference, pending a hearing on her allegations.

At the state conference convention that was held Oct. 5, Mr. Johnson told the delegates that he didn’t know about Ms. Childs’ accusations against Rev. Gatewood until he received her letter on Sept. 11, even though email records showed he received the outside investiga- tor’s report almost two years earlier.

“He publicly scolded and rebuked Ms. Childs for going to the press and not handling the matter within the organization,” the lawsuit said. “Ms. Childs was present and heard President Johnson’s remarks.”

In October, Rev. Gatewood said in an email that while he never intentionally harassed anyone, he realized his actions “may have been received as sexual.”

He was less conciliatory in January, when he emailed several people, including some NAACP officials, asking that Ms. Childs and others be removed from NAACP membership.

“Therefore, I would respectfully and strongly suggest on one hand, you use the list of individuals I have provided, and graciously remove each of these members per the NAACP Constitution & Bylaws,” he wrote in the Jan. 14 email. He also asked that the NAACP restore his membership.

Attorneys for Ms. Childs declined comment on the lawsuit.