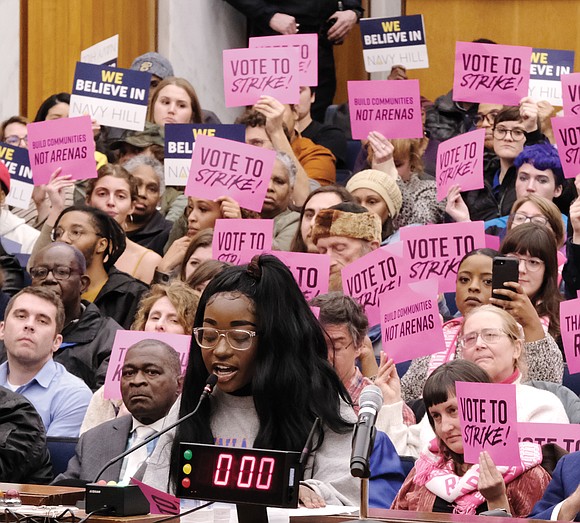 Naomi Isaac urges Richmond City Council to kill the $1.5 billion Coliseum replacement plan at Monday’s meeting. She was among a long line of people speaking on the proposal before council voted to scrap it. Behind her, supporters and opponents of the plan hold up signs reflecting their views. Photo by Sandra Sellars

Start over — and this time include the public.

That’s the cry from the five members of Richmond City Council who followed through Monday night in eliminating the $1.5 billion Coliseum replacement and Downtown redevelopment plan, just as they said they would do when the nine-member governing body met last week as a committee.

The five members overrode efforts by the four others to keep the proposal — already on life support — alive for another two weeks to allow it be amended before final consideration.

But no one from the city administration, the Navy Hill District Corp. developers or City Council supporters re- leased any of the proposed alterations.

The decision to strike the project from the council’s agenda was a defining moment for the city government and the council, which almost rou- tinely has embraced taxpayer- supported development plans that the business community has pushed as beneficial.

The rejection vote could well impact the political futures of Mayor Levar M. Stoney, who will seek re-election in Novem- ber, along with most of the City Council members — giving voters their first opportunity to issue their judgment on those who supported or opposed the massive proposal.

What is clear is that the council vote shot down the signature project of Mayor Stoney, who ducked Monday night’s meeting and later expressed disappointment. He also vowed to continue to work to move the city forward.

The vote also crushed the hopes of the Navy Hill District Corp., led by Dominion Energy top executive Thomas F. Farrell II, which had spent multiple years and millions of dollars spearheading what the group described as a “transformational plan” for a 10-block area near City Hall that includes land from which the city government had displaced a once thriving black community decades ago.

In a statement, the Navy Hill group also expressed disappointment but declared its pride in the “proposal that we delivered.”

“This was a missed opportunity to address many of the issues we heard about through countless hours of community engagement.”

The decisive vote to strike from the council agenda all ordinances related to the Navy Hill proposal came after more than 120 people spoke for or against the contentious proposal. Supporters envisioned the plan creating thousands of new jobs for people previously hard-pressed to find work, along with a large mix of apartments, offices, restaurants and retail spaces, a new hotel and a new Coliseum. Opponents saw it as a boondoggle for the wealthy that would cost taxpayers dearly.

The divisions the proposal generated, particularly within the African-American community, were embodied in two men — James E. “J.J.” Minor III, president of the Richmond Branch NAACP, who strode to the microphone to urge City Council to back the measure that he said would create new hope, and John Dixon, a former Petersburg police chief and president of the Richmond Crusade for Voters, who encouraged the council majority to stand firm in their rejection of a risky development.

Despite the vote, the majority sought to dispel any impression that they are anti-development toward the sector of Downtown encompassing the Coliseum, the city’s main court- house, the city Social Services building, parking lots and the former public safety building. The area, along with two city- owned parking lots south of Broad Street, has been eyed by City Hall as a potential redevelopment area since at least 2009.

“It is about saying ‘yes’ to a pathway forward that a major- ity of our citizens said they want,” said Ms. Lynch, including finding out whether Richmond residents support replacing the Coliseum with a new, larger one at taxpayer expense.

In the view of Ms. Lynch and her colleagues, the vote “to hit the reset button on the current proposal” opens the door to creation of an inclusive and equitable process to redevelop the 22 acres of largely city-owned property in the blocks bounded by Marshall, Leigh, 5th and 10th streets, as well two blocks south of Broad Street.

In their view, a restart would require the Stoney administration to first launch public forums, surveys and wide outreach to deter- mine if Richmond residents want a new arena. They also called on the administration to get the city-owned property appraised, to complete a plan of development for the area that includes public input, to provide an assessment of the infrastructure and then issue new requests for proposals from developers.

“I think there are opportunities,” said Ms. Gray, who is consid- ered a potential challenger in November to Mayor Stoney. “This process needs to be transparent and involve the people from the beginning.”

The minority, led by Council President Cynthia I. Newbille, 7th District, unsuccessfully sought more time to make the plan more palatable before the vote that had been scheduled for Monday, Feb. 24.

“Our city and our citizens deserve our due diligence on any project before us to fully vet it,” Dr. Newbille said. “Not to try is not acceptable.”

long fight over the development, particularly since August when Mayor Stoney introduced the ordinances, has consumed her and other council members and forced other important matters to get short shrift. “I think it doesn’t matter if you’re for or against this process; I think we are all worn out.”

For the majority, the key issue remained just one section of the proposal — the plan to replace the aging and now closed nearly 50-year-old Coliseum with a new larger event space for concerts, sporting events and family activities.

The proposal for a modern 17,500-seat arena would have required taxpayers to bear much of the estimated $600 million cost to finance the construction — in large part from real estate taxes generated by future increases in values on property located in an 80-block swatch of Downtown outside of the proposed development area.

A commission of experts that the council created to review the Navy Hill plan ended up panning that idea. Mayor Stoney lobbied the General Assembly in a bid to gain permission to replace a major share of the financing with state sales taxes as other cities have been allowed to do, but that effort collapsed Feb. 3.

The arena development was the linchpin of the ill-fated proposal, and both Mayor Stoney and Mr. Farrell insisted none of the private development could take place without a new arena built by taxpayers, despite clear signals from residents that construction of new school buildings was a far higher priority.

While the council majority had little problem with Navy Hill’s proposed private development, they could not get behind the arena based on its cost to the public, the lack of any regional support and the likelihood that the city would not see any significant return from the taxpayer investment for at least 20 years.

The level of trust in the Navy Hill projections of big future returns to the city appeared to be undermined by at least three changes in the financial package and by memories of past taxpayer-supported development that defied projections and never became revenue gushers, leaving debts for the city to pay off, such as the 6th Street Marketplace and the Washington NFL team training camp.

Skeptics and opponents made use of social media tools to get their message out as effectively as Navy Hill proponents. Activists Farid Alan Schintzius created a Facebook group that raised $10,000 to pay for a series of billboards urging rejection.

Unexpected players proved influential, such as Justin Griffin, a small business attorney who create a NoColiseum webpage, and used it to skewer the flaws he found in examining Navy Hill’s numbers, creating credibility issues with his trenchant reports that undermined confidence in projections for job creation, revenues and other elements of the proposal.