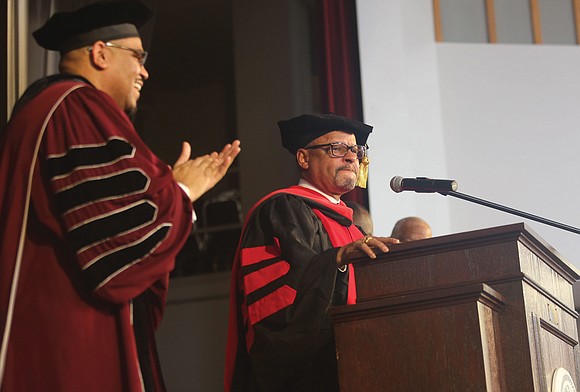 Virginia Union University President Hakim J. Lucas stood before an audience of more than 350 students, faculty, alumni, trustees and dignitaries last Friday to remember the past and mark the path to the future at the university’s 155th Anniversary Founders Day Convocation.

“We are here today to celebrate our 155th birthday and dedicate a new historical landmark,” Dr. Lucas said at the convocation in the Allix B. James Chapel at Coburn Hall on the North Side campus.

While VUU traces its founding to 1865 and the arrival in Richmond, the former capital of the Confederacy, of representatives of the American Baptist Home Mission Society, who held classes for the new freedmen, it was Mary Lumpkin who gave the school its first home.

Ms. Lumpkin was the enslaved common-law wife of white slave trader Robert Lumpkin, whose land and buildings at 15th and Franklin streets in Shockoe Bottom were known as “Lumpkin’s Jail,” or “the Devil’s Half Acre.” The jail was a holding pen for enslaved people before sale and transport, as well as a punishment or “breaking” center, according to the university’s history.

Dr. Nathaniel Colver, an abolitionist and Baptist minister looking to establish a seminary, went to Ms. Lumpkin, then a widow, and rented the property in 1867. Classes for formerly enslaved people were held on that site for the next three years, according to the history.

“Richmond Theological School for Freedmen was one of the four institutions forming the ‘Union’ that gives us our name,” Dr. Lucas told the audience.

He later reminded the audience that VUU is the only historically black college or university in Richmond and has been “a pillar of the community for 155 years.”

“Much like our mission then, we continue to empower students while providing a nurturing, intellectually challenging and spiritually enriching environment for learning,” he said.

Delegate Luke E. Torian, who earned his master’s in divinity in 1984 from VUU’s School of Theology, was the keynote speaker at the ceremony. In addition to serving as pastor of First Mount Zion Baptist Church in Dumfries and founding VOICE, Virginians Organized for Interfaith Community Engagement, Delegate Torian is the first African-American chairman of the House Appropriations Committee in the 400 years of the Virginia General Assembly.

“The Virginia General Assembly will be contributing $1 million to the university,” Delegate Torian announced.

The audience responded with an energetic round of applause and extended standing ovation.

Pamela Cox, VUU’s director of strategic communications, said the money will support the university’s restoration of historic Industrial Hall, one of the original nine buildings on the Lombardy Street campus from the late 1800s. It is being converted into an arts and cultural center, Ms. Cox said.