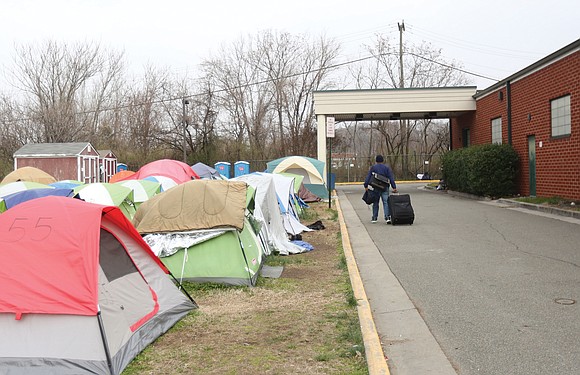 A resident of Cathy’s Camp on Oliver Hill Way rolls his belongings next to a row of tents. To the right is the Annie Giles Community Resource Center, the city’s winter shelter. The center also was open during the day this week for residents to meet with staff from nonprofits, the city and a mental health agency as part of an outreach effort to help provide needed services. Photo by Regina H. Boone

Money and comfort are among the reasons that the homeless encampment across from the Richmond Justice Center is still standing and the city’s goal of dismantling it is still unrealized.

He said Blessing Warriors RVA, for example, has access to at least 10 rental houses with enough space for 40 people.

He said three or four willing individuals who are receiving paychecks from work, Social Security or other financial sources could be placed in each house as roommates, with each able to pay an affordable share.

But Mr. Smith said most camp residents cannot take advantage of that opportunity because they cannot afford the two months rent and security deposit most landlords require.

“What we need is a community fund that could help cover that cost,” he said. “But that’s not available.”

Camp resident Melissa Fentress, 46, said that is the problem that she and her mother, Betsy, face. While both receive government checks, they haven’t been able to find a landlord willing to overlook their poor credit records or accept less in advance payments.

Kelly King Horne, executive director of Homeward, the regional coordinating organization for homeless services, said she wishes money could be found for such a fund.

She said her organization doesn’t have it and neither do other nonprofit partners. She said she is uncertain it could be raised.

Creation of such a fund, modeled after one created in Massachusetts that provides up to $4,000 to enable homeless people to meet rent challenges, does not appear to be on the radar screen of City Hall or the General Assembly.

There are hopes for more housing resources in the future that could change the picture for Cathy’s Camp residents, as well as other homeless people in the Richmond area.

In the East End, the nonprofit Virginia Supportive Housing, whose existing low-cost apartments are filled, is planning to expand its inventory by transforming the former city nursing home on Cool Lane into 105 units that could help individuals facing a housing crisis.

Plans also are in the works by a nonprofit to create a 150-member community for the homeless in a nearby rural community, and an individual is proposing a 60-unit space in Richmond for able-bodied homeless individuals willing to be involved in job and life-skills training.

But until such options become available, most of the 130 current residents of Cathy’s Camp — a large portion of whom are unemployable because of physical or mental challenges — plan to stay, with the steadfast support of Blessing Warriors RVA, whose volunteers provide daily meals, supplies and hugs of encouragement.

Despite living in unheated tents and weathering heavy rain, frigid cold and other challenges, camp residents mostly turned down offers of shelter made during a three-day outreach effort this week orchestrated by Homeward with its nonprofit partners and the city.

Despite a hopeful beginning, the residents found few offers of aid other than the one they don’t want — a temporary move to a shelter that they see as failing to deal with their long-term housing needs.

City officials believe shelter would be a warmer option that could ensure that camp residents could receive professional case management.

“This is just more of the same,” said Rhonda Sneed, founder and leader of the 3,500-member Blessing Warriors RVA that runs the camp. In addition to food and other daily services, Blessing Warriors’ volunteers get camp members to doctors’ appointments, ensure they take needed medication and help those who are employed get to work.

She said the outreach staff that came this week to the Annie B. Giles Community Resource Center that abuts the camp could do little more than enter the names and information of residents on the waiting list for housing. Most of the residents already were on the list, Ms. Sneed said.

Cathy’s Camp is home to about 130 people.

Representatives of the Richmond Behavioral Health Authority, the city’s mental health provider, also came to the center, but many of the residents already receive RBHA services.

The bottom line: No momentum on the city’s goal of moving the 130 people into temporary housing and removing the unregulated camp, a visible reminder of the dearth of affordable places to live in the Richmond area.

Ms. Sneed said she has started getting calls from the Salvation Army and other shelters that have space, but said residents have been there, done that and remain uninterested in leaving.

Burney Makk, 45, who became homeless after suffering disabling injuries as a construction laborer, explained why shelter is not an option.

“You are always having to follow somebody else’s rules,” he said. “You are never in control.”

He also noted that the city’s shelter is a prime example of how unpleasant such spaces can be. He said the sleeping mats are thin and provide no support on a concrete floor. He said there is no privacy and no escape from the smell of unwashed bodies and the grunts, groans and snoring.

“On the women’s side, they keep the lights on all night, so it’s harder for them to sleep,” he said. No meals are served and no pets are allowed.

He said, by contrast, camp residents at least have a tent that provides some privacy. And the sleeping bags and blankets that Blessing Warriors RVA have provided are far more comfortable than the mats and offer sufficient warmth even on freezing nights, he said.

“About the only thing you get in the shelter is warmth,” he said, adding that is not enough of a benefit weighed against the drawbacks.

And for Mr. Makk, a shelter stay only lasts so long.

“If nothing works out as far as a new space, then we’re just back where we were. It’s just a revolving door that doesn’t solve anything,” he said.

“What I need is housing,” he said. “I plan to stay here until that can get figured out.”