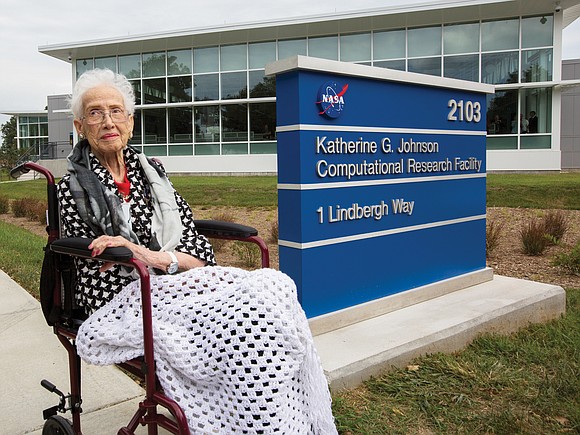 Katherine G. Johnson, whose pioneering 33-year career with NASA impacted the space program from the first manned space flight in 1961 to the early years of the Space Shuttle program in the 1980s, receives high praise and recognition as the NASA Langley Research Center in Hampton names the computational research facility in her honor in September 2017. Photo by David C. Bowman/NASA Langley

She was 101, and an inspiration to people of all ages everywhere.

As her family worked out funeral details this week, tributes began pouring in.

“After a lifetime of reaching for the stars, today, Katherine Johnson landed among them,” former President Obama posted on Twitter. “She spent decades as a hidden figure, breaking barriers behind the scenes. But by the end of her life, she had become a hero to millions — including Michelle and me.”

Mrs. Johnson was awarded a Presidential Medal of Freedom by the former president in November 2015, and in 2016 he cited her in his State of the Union address as an example of America’s spirit of discovery.

“Her pioneering legacy will never be forgotten,” NASA Administrator Jim Bridenstine posted to Twitter in announcing her death on Monday. He wrote the NASA family will never forget her “courage and the milestones we could not have reached without her. Her story and her grace continue to inspire the world.”

“She’s one of the greatest minds ever to grace our agency or our country,” then NASA Administrator Charles Bolden said when Mrs. Johnson was presented with the medal by President Obama.

In 2017, NASA named a research facility for Mrs. Johnson at the NASA Langley Research Facility in Hampton, and a year later, her alma mater, West Virginia State University, marked her 100th birthday in August 2018 by establishing a scholarship in her name and erecting a statue.

“Katherine Johnson was a pioneer for her work @NASA_Langley that broke barriers of race and gender and helped take us to the moon,” Gov. Ralph S. Northam posted on Twitter. “Across our Commonwealth and around the world, we mourn her loss and honor her remarkable life.”

Mrs. Johnson and her female African-American colleagues at the fledgling NASA were known as “computers” when that term was used not for a programmed electronic device but for a woman who did computations. They were little known to the public for decades, but gained overdue recognition

when the book “Hidden Figures” was published and the 2016 Oscar-nominated movie starring Taraji P. Henson as Mrs. Johnson, hit the screens. Mrs. Johnson attended the 2017 Academy Awards ceremony in Hollywood, joining the film’s cast in presenting an award for documentaries. Mrs. Johnson was given a standing ovation.

She had a groundbreaking career of 33 years with the space agency, from 1953 until her retirement in 1986. Her work influenced every major space program — from American’s first manned space flight by Mercury astronaut Alan B. Shepard Jr. in 1961 to the first moon landing in 1969 by Apollo 11 astronauts and the early years of the Space Shuttle program.

Astronaut John Glenn thought so much of Mrs. Johnson and her work that he insisted she be consulted before his historic Earth-orbiting flight in 1962.

“He knew I had done (the calculations) before for him and they trusted my work,” Mrs. Johnson told the Washington Post in 2017. During the space race between the United States and the former Soviet Union that began in the late 1950s, Mrs. Johnson and her African-American co-workers ran the numbers for unmanned rocket launches, test flights and airplane safety studies using pencils, slide rules and mechanical calculating machines. But they did their work in facilities separate from white female workers and were required to use separate restrooms and dining facilities.

Mrs. Johnson always said she was too busy with her work to be concerned with racism. “She didn’t close her eyes to the racism that existed,” Margot Lee Shetterly wrote in “Hidden Figures.” “She knew just as well as any other black person the tax levied upon them because of their color. But she didn’t feel it in the same way. She wished it away, willed it out of existence in as much as her daily life was concerned.”

As a youngster, Mrs. Johnson was fascinated by numbers and counted everything, even the steps she took while walking and the dishes she washed after dinner.

She grew up in White Sulphur Springs, W.Va., at a time when educational opportunities for African-Americans were limited because of segregation. But her mother, a former teacher, and her father, a farmer and handyman, stressed education and moved the family 120 miles to Institute, W.Va., that had a high school for black children.

Mrs. Johnson’s math skills got her into West Virginia State College at age 15. She zipped through the school’s math program, earning degrees in math and French before becoming one of the first African- American students to integrate the graduate school at West Virginia University in 1938.

She left after the first session to start a family with her husband, James F. Goble, a chemistry teacher, and returned to teaching public school when her three daughters, Constance, Joylette and Katherine grew older.

Mrs. Johnson went to work for the National Advisory Committee for Aeronautics, a forerunner of NASA, in Hampton in 1953 with dozens of other African-American women.

At NASA, Mrs. Johnson found herself in a realm made up al- most exclusively of white men when she was chosen to be part of the team supporting the 1961 mission that made Alan Shepard the first American in space. She would go on to calculate crucial rocket trajectories, orbital paths and launch windows.

Mrs. Johnson made the transition to the computer era and worked on the shuttle program while writing or co-writing 26 research reports before retiring in 1986, NASA said.

She said she was most proud of her contributions to the first moon mission, which included the calculations that synched the lunar lander craft and the orbiting command module.

Even after retiring, she tutored young people in mathematics from her home in Hampton. She was active with her sorority, Alpha Kappa Alpha Sorority, and her church, Carver Memorial Presbyterian Church in Newport News, where she sang in the choir. 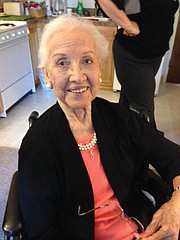 In May 2017, she gave the commencement address at Hampton University. Then 98, she delivered her remarks in a video recording as she sat on the stage.

Love learning, help others and do your best, she told the graduates.