The Virginia Union University Lady Panthers have barely tapped the brakes in running roughshod over the CIAA women’s basketball tournament during the past five years.

Coach Ann Marie Gilbert’s Lady Panthers arrived at the tournament in Charlotte, N.C., as usual with the label of heavy favorite. 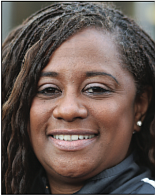 The numbers under Coach Gilbert are staggering.

In her five seasons with the team, VUU is 134-17 overall and 70- 10 in the CIAA regular season play, winning five straight Northern Division trophies.

Additionally, the tal- ented Richmonders are 10-1 in CIAA Tournament play —with three titles in four years — under Coach Gilbert and 9-4 in NCAA Division II playoff action.

The Lady Panthers were scheduled to play a quarterfinal game on

The Lady Panthers are ranked 12th nationally and fourth in the Atlantic Region, and can look forward to another trip to the NCAAs in a couple of weeks. 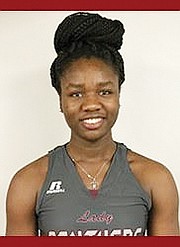 There is depth aplenty on Coach Gilbert’s roster. When superstar Shareka McNeill suffered a season-ending injury in December, others stepped up, including her twin sister, Shameka McNeill.

An influential newcomer has been 6-foot-1 Dy’Manee Royal, a transfer from Florida A&M University. Royal averages nine points and eight rebounds per game and forms a formidable front line with Okoye and Jasmine Carter.

There’s room for the name of another Lady Panther to be inscribed on the trophy once action ends this Saturday. 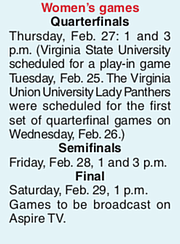