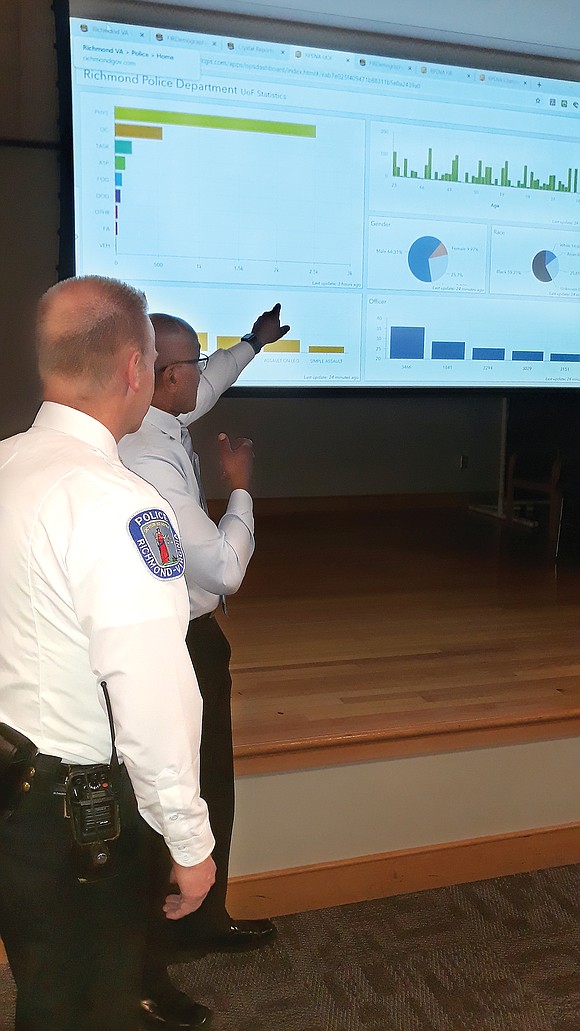 Local police departments have long kept a tight grip on their information, only grudgingly releasing crime statistics and usually keeping data on officer activity off limits to taxpayers.

But the Richmond Police Department is taking a different tack.

Instead of keeping its data locked up behind a “blue wall,” the goal is now to provide as much transparency as possible without disclosing information on specific incidents or arrests that involve courts and testimony.

In the process of opening up, the department is on the way to creating what many see as a national model that other departments might emulate.

A new records management system is being installed in the department with the help of Soma Global, a consulting firm. Chief Will Smith recently showed off the system to members of the media, noting it will offer city residents a clearer of view of the department’s work.

The department is planning to hold more “focus” meetings to get input on ways the system can be improved before taking it live within six months.

Behind the scenes, Pierre Redding is leading the development of the new system in his role as technology manager for the internal records management system and field mobility solutions for the computers in cars.

Also involved in upgrading officers’cell phones and having patrol officers’ comput- ers more portable, Mr. Redding said the new system he’s involved in creating will be a sea change from what is now available to the department and the public.

The team he is working with also includes another technology manager with the department, Larquel D. Way, and two technology support employees, Lakesha S. Monroe and Natasha C. White.

He said the new system would transform the current static data that the department presents on its website into a dynamic system that will allow people to create graphs and charts and overlay maps to show them where crime is occurring and trends. People will be able to drill down into areas as small as neighborhoods and blocks and track data over short or long periods of time on everything from reported crime to arrests and internal and public complaints against officers, he said.

Instead of waiting weeks, the system will feed in data in real time, he said, something that has not been possible with the current system.

Whether the results address the con- cerns of groups such as the Richmond Transparency and Accountability Project, or RTAP, that have been advocating for the department to release more of its internal information remains to be seen.

The new system represents the latest step in the department’s efforts to be more open that began under former Police Chief Alfred Durham.

In February 2018, Chief Durham began having the department to post on its website weekly crime reports that previously were only circulated within the department. Advocates began pressing him to release more information following the May 2018 shooting death of Marcus-David Peters, a 24-year-old biology teacher who stripped naked during a mental breakdown and charged a Richmond Police officer who shot him twice. The officer’s actions later were upheld by then-Richmond Common- wealth’s Attorney Michael N. Herring, who rejected the efforts of Mr. Peters’ family to have the officer charged.