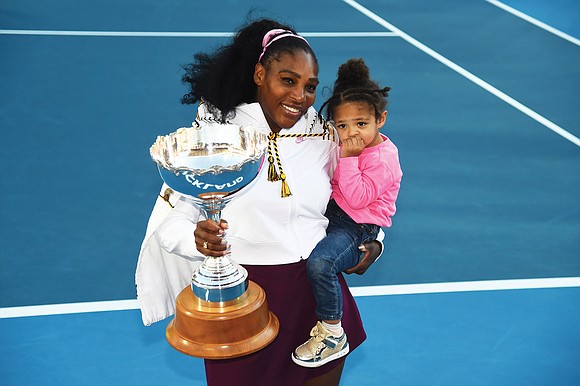 Tennis star Serena Williams holds both her daughter, Alexis Olympia Ohanian Jr., and the ASB trophy after winning the singles title last Sunday at the ASB Classic, also known as the Auckland Classic, in New Zealand. Photo by Chris Symes/Photosport via AP

She also donated her match-worn dresses to be auctioned to help raise money.

Serena won $42,000 for clinching the singles title 6-3, 6-4 over American compatriot Jessica Pegula and was set to add to that tally after the doubles final with good friend Caroline Wozniacki, but they were beaten by American duo Asia Muham- mad and Taylor Townsend 6-4, 6-4.

“I’ve been playing in Australia for more than 20 years and it has been hard for me to be watching the news with all the fires,” the 38-year-old Serena said at the on-court presentation after her singles victory.

“So much has happened that I decided I’d donate all my dresses from my matches and all my prize money for a great cause. So thank you guys.”

Serena’s victory was her 73 WTA title and broke a near three-year drought despite her having appeared in five finals since she clinched her 23rd Grand Slam crown with a win at the Australian Open in 2017.

Serena was one of many domestic and international athletes, from cricketers and tennis players to Australian NBA players, to have pledged to support fundraising for the bushfire victims.

Since October, thousands of Australians have faced repeat evacuations as huge and unpredictable fires scorched more than 25.5 million acres — an area roughly the size of South Korea — killing more than two dozen people, destroying more than 2,000 homes and killing and/or displacing a staggering 1 billion of Australia’s famed koalas and kangaroos and other wildlife.