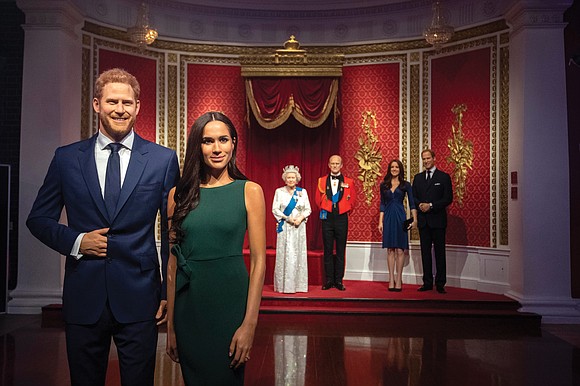 Figures of Britain’s Prince Harry and his wife, Meghan Markle, are now situated apart from their original positions next to Queen Elizabeth II, rear from left, Prince Philip and Kate, the Duchess of Cambridge, and Prince William at Madame Tussauds Wax Museum in London following the couple’s announcement earlier this month that they are stepping down as working royals. Photo by Victoria Jones/PA via Associated Press

Britain’s Prince Harry and his American wife, Meghan Markle, no longer will use the titles “royal highness” or receive public funds for their work under a deal that lets the couple step aside as working royals, Buckingham Palace announced last Saturday.

Releasing details of the dramatic split triggered by the couple’s unhappiness with life under media scrutiny, the palace said Harry and Meghan will cease to be working members of the royal family when the new arrangements take effect in the “spring of 2020.”

The radical break is more complete than the type of arrangement anticipated 10 days ago when the royal couple stunned Britain with an abrupt announcement that they wanted to step down. They said they planed to combine some royal duties with private work in a “progressive” plan, but that is no longer on the table.

Harry and Meghan will no longer use the titles His Royal Highness and Her Royal Highness but will retain them, leaving the possibility that the couple might change their minds and return sometime in the future.

Harry’s late mother, Diana, was stripped of the Her Royal Highness title when she and Prince Charles divorced.

The young couple will be known as Harry, Duke of Sus- sex, and Meghan, Duchess of Sussex. Harry will remain a prince and sixth in line to the British throne.

The agreement also calls for Harry, 35, and Meghan, 38, to repay 2.4 million pounds, or $3.1 million, in taxpayers’ money spent renovating Frogmore Cottage, a house for them near Windsor Castle. The use of public funds to transform the house’s five separate apartments into a spacious single family home for them had raised ire in the British press. They will continue to use Frogmore Cottage as their base in England.

The deal came after days of talks among royals sparked by Harry’s and Meghan’s announcement Jan. 7 that they wanted to step down as senior royals and live part-time in Canada.

The departure of the couple and their infant son, Archie, is a wrench for the royal family, and Queen Elizabeth II said earlier last week that she wished the couple had wanted to remain full-time royals, but she had warm words for them in a statement last Saturday.

The 93-year-old queen said she was pleased that “together we have found a constructive and supportive way forward for my grandson and his family. Harry, Meghan and Archie will always be much loved members of my family.”

“I recognize the challenges they have experienced as a result of intense scrutiny over the last two years and support their wish for a more independent life,” Queen Elizabeth said.

It is not yet clear whether Harry and Meghan will continue to receive financial support from Harry’s father, Prince Charles, who used revenue from the Duchy of Cornwall to help fund his activities and those of his wife and sons.

The duchy, chartered in 1337, produced more than 20 million pounds, or $26 million, in revenue last year. It is widely regarded as private money, not public funds, so Prince Charles may opt to keep details of its disbursal private. Much of the royals’ wealth comes from private holdings.

Though Harry and Meghan no longer will represent the queen, the palace said they would “continue to uphold the values of Her Majesty” while carrying out their private charitable work.

The withdrawal of Harry from royal engagements will increase the demands on his brother, Prince William, and William’s wife, Kate, the Duchess of Cambridge.

Buckingham Palace did not disclose who will pay for the couple’s security going forward. It currently is taxpayer funded and carried out primarily by a special unit of the Metropolitan Police, also known as Scotland Yard.

“There are well established independent processes to determine the need for publicly funded security,” the statement said.

Harry and Meghan have grown increasingly uncomfortable with constant media scrutiny since the birth in May of their son, Archie. They married in 2018 in a ceremony that drew a worldwide TV audience.

Meghan joined the royal family after a successful acting career and spoke enthusiastically about the chance to travel throughout Britain and learn about her new home, but disillusionment set in fairly quickly.

She launched legal action against a newspaper in October for publishing a letter she wrote to her father. Harry has complained bitterly of racist undertones in some media coverage of his wife, who is biracial.

The couple’s desire to separate from the rest of the family had been the subject of media speculation for months. But they angered senior royals by revealing their plans on Instagram and a new website without advance clearance from the queen or palace officials.

Queen Elizabeth summoned Harry, William and Charles, to an unusual crisis meeting at her rural retreat in Eastern England in an effort to find common ground.

The result was last Saturday’s agreement, which is different from Harry’s and Meghan’s initial proposal that they planned to combine a new, financially independent life with a reduced set of royal duties.

It is not known where in Canada the couple plan to locate.