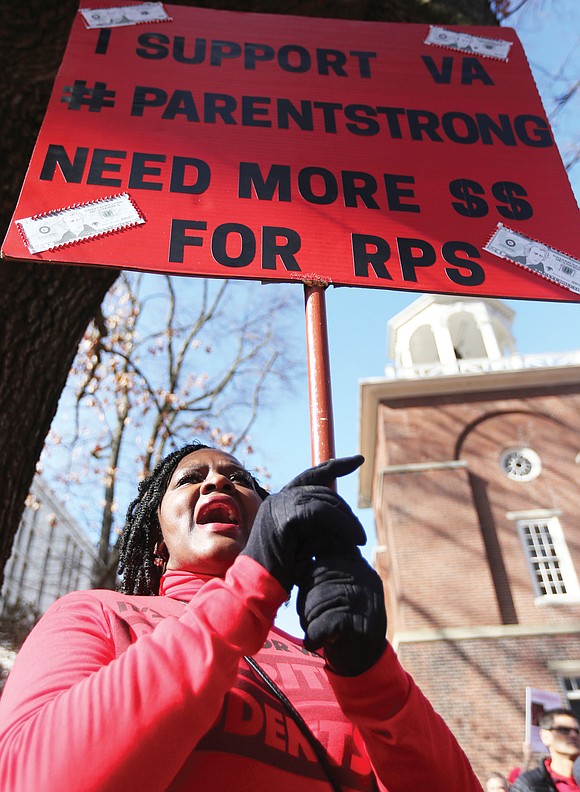 The State Capitol echoed with the chants “Fund Our Future!” and “Red4Ed!” as educators, students and their supporters gathered in the thousands Monday afternoon to press for increased state funding for teachers and public schools in Virginia.

“It is past time for this Commonwealth to live up to its obligation to meet the needs of communities,” Jim Livingston, president of the Virginia Education Association, said during a rally in Capitol Square. “We know that when our communities have quality public schools, everyone benefits.”

The rally was among several initiatives launched by education advocates over two days. Starting with a briefing for supporters on Sunday and ending with an open house Monday afternoon at VEA headquarters in Downtown, advocates worked to impress upon the General Assembly the need for more money for over- worked, underpaid teachers and to fix deteriorating schools.

They sought a 5 percent increase in teacher salaries, greater support for schools with large numbers of students from poor families, and increasing the number of support staff in English as a second language courses. Currently, the state standards provide one full-time support staffer for about every 60 ESL students.

Education advocates dressed in red shirts and scarves were a major presence Monday around Capitol Square, where a line to enter the Pocahontas Building that holds state lawmakers’ offices spanned two blocks. The red-shirted advocates also were present at General Assembly committee meetings where education legislation was under consideration.

The rally was the third annual big education rally at the Capitol since 2018. Following last year’s rally, the General Assembly approved money for a 5 percent raise for teachers and increased school funding during the fiscal year beginning July 1, 2019.

According to a state Department of Education survey, the average salary for teachers statewide was $59,297 in 2018-19, up 3.57 percent from the year before.

But advocates said Virginia teachers are paid $8,500 less per year than the national average and that Virginia ranks 40th nationally in state funding for public education on a per-student basis.

Education officials and supporters also expressed concern over Gov. Ralph S. Northam’s proposed state budget for 2020-22 that includes a major investment for early childhood education and money to boost ESL support staff, but has no money for teacher raises beginning July 1 and only includes a 3 percent raise for teachers beginning July 1, 2021.

“It’s not good enough. We need better public education funding,” said Lauren Brill, president of the Fauquier Education Association and a kindergarten teacher whose daughter is a student at her school. 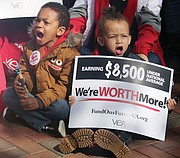 Lobbying efforts were aided in part by Richmond Public Schools canceling classes on Monday after about 700 teachers — about a third of the school system’s teachers — said they would be absent for the rally and to lobby lawmakers.

Legislation sponsored by Sen. Jennifer L. McClellan of Rich- mond and Delegate Lashrecse D. Aird of Petersburg would fully finance an equity fund developed by the Virginia Board of Education to help at-risk students in high-need school districts.

Sen. Ghazala Hashmi of Richmond and Delegate Elizabeth Guzman of Prince William County also have proposed fund- ing ESL staff at a caseload as low as 25 students per support person.

“I feel like some of the bills that will fully fund our schools will be passed so that we can give our students, teachers and staff what they need to be successful,” said Richmond Education Association President Katina Harris.

“We are thrilled to have a leadership in the assembly that has articulated that commitment to public education,” he said. “Now we just need everybody to come through and show that love with their votes.”

Next year’s Fund Our Future rally already has been set for Jan. 25, but supporters were urged Monday to not slow down their efforts.

Mr. Livingston called for the repeal of a ban on collective bargaining for public employees so that teachers can hold the General Assembly’s “feet to the fire” when it comes to support and policy. Legislation introduced this session by Delegate Guzman and Sen. Jennifer B. Boysko of Fairfax County would remove this prohibition from Virginia law.

“We stand hand in hand together,” said Doris Crouse-Mays, president of the Virginia AFL-CIO, as she promised her labor organization’s support for the VEA’s mission and goals.

“Collectively we bargain, divided we beg,” she said.