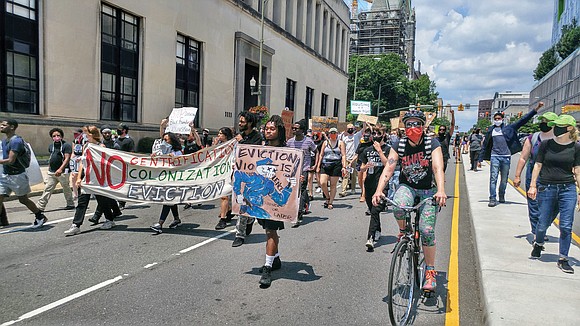 Protesters chant as they march down Broad Street in Downtown toward the state Capitol following a rally Wednesday outside the John Marshall Courts Building. Photo by George Copeland Jr.

Catalina is concerned for her community’s future.

With Jon Liss of New Virginia Majority providing translation, the Guatemala City native and South Side resident addressed in Spanish a crowd of about 100 housing advocates Wednesday outside the John Marshall Courts Building in Downtown, where more than 1,900 eviction cases are set to be heard.

Eviction hearings had been suspended for about four months during the coronavirus pandemic.

Catalina, who declined to provide her last name, and her family of four are among many Richmond residents facing an uncertain housing future. And like the advocates who gathered near the courthouse entrance, she stressed both the need for solutions to the looming crisis and a commitment to assist those at risk.

Dissatisfaction over officials’ approach to the eviction issue led some of those present to march across Broad Street, chanting all the way, to the fences surrounding Capitol Square to Richmond City Hall and back to the courthouse, where an entryway window was smashed after Richmond sheriff’s deputies arrested several people.

Following the incident, the courthouse was closed for the day. No information was available at Free Press deadline on the charges or what actions led to the arrests.

Eviction cases statewide were halted in March by the state Supreme Court in response to the growing coronavirus pandemic. A second suspension later was ordered in early June by Gov. Ralph S. Northam after Mayor Levar M. Stoney requested a statewide moratorium on evictions until the pandemic passed.

That second suspension, however, expired Monday, and state officials have said that the state Supreme Court has made it clear it won’t halt eviction cases a third time. More than 12,000 eviction cases have accumulated in Virginia courts during the pandemic, with Richmond, already a nationwide leader in eviction rates, set to hear the highest number of cases in the state.

Erik Johnston, director of the Virginia Department of Housing and Community Development, estimated that 50,000 Virginians are at risk of eviction during the month of July. With a halt on evictions for federal mortgages and subsidies ending on July 25, the number of people kicked out of their homes may grow even larger.

In response to the surge of eviction cases, Gov. Northam announced the launch of the Virginia Rent and Mortgage Relief Program during a COVID-19 press briefing on June 25. Using $50 million in funding from the federal CARES Act, the RMRP will partner with local nonprofits to aid families struggling to cover rent and mortgage payments.

Eligibility requirements for families include valid leases and mortgage statements, an inability to make payments due to COVID-19, a monthly rent or mortgage at or below 150 percent of fair market rent and a gross household income at or below 80 percent of the area median.

“Because we know the pandemic is having a disproportionate health and financial impact on people of color, this program will have an equity lens and target outreach to those communities,” Gov. Northam said.

“The governor and his administration assured us that they would focus on providing financial relief,” Delegate Lamont Bagby of Henrico County, chairman of the Virginia Legislative Black Caucus, said in a statement following the program’s unveiling. “Together, we look forward to doing more to address underlying systemic issues related to housing and doing more to help provide relief.”

The initiative has not helped Catalina and her family, who are relying on donations and whatever jobs they can do to pay the rent and make ends meet.

RMRP also has been little comfort for housing advocates, which lead the directors of the Virginia Poverty Law Center, the Legal Aid Justice Center and the New Virginia Majority to write a letter to Gov. Northam calling for a more substantial solution.

“To stop mass evictions from happening during the current public health crisis, more must be done,” the letter read. “We are again urging you to issue an executive order prohibiting residential evictions until a fully funded, robust rent relief program has been fully implemented and used to reduce the eviction caseloads in courts across Virginia.”

Gov. Northam acknowledged that RMRP may need more time to properly begin its work, echoing the VLBC in asking state judges to extend the eviction moratorium locally. But he has otherwise remained reluctant to use his executive authority to order a halt to eviction cases.

The frustration felt by housing advocates was palpable at Wednesday’s rally, which was held simultaneously with a similar event in Alexandria, and was focused on housing information and empathy. Many of the speakers, from groups that included the Virginia Student Power Network, the Legal Aid Justice Center and the Richmond Tenants Union, decried RMRP’s eligibility requirements, the many social constructs that negatively impact African-American communities and the need for judges and Gov. Northam to take the initiative to protect the lives at risk.

“I have been homeless many, many times over the past 40 years,” said Christopher Rashad Green, lead community organizer with New Virginia Majority, as he stressed the need for people to understand the full impact evictions have on many. “We’re looking at 200,000 evictions by the end of July and August. And that’s not right.”

According to Rev. Ralph S. Hodge, senior pastor at Second Baptist Church of South Richmond, there has been some progress at the local level, with members of RISC pressing Mayor Stoney to apply 30 percent of the $20.1 million in CARES Act funding provided to the city to rent relief during a meeting a few weeks earlier. On June 22, the mayor announced a $6 million allocation for the city’s Eviction Diversion Program and rental assistance.

However, Rev. Hodges said the systems in place leave the city’s nonprofits with little time to prepare to aid those facing eviction, making another moratorium that much more necessary.