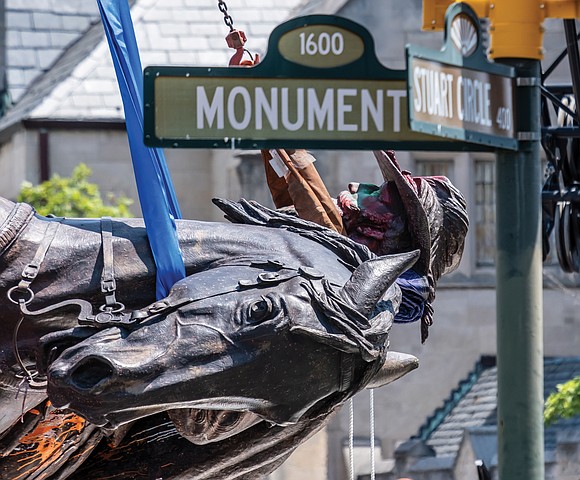 The statue of Confederate Gen. J.E.B. Stuart is turned on its side and lowered onto a flatbed truck Tuesday after being removed from its pedestal at Monument Avenue and Stuart Circle. It is the last of four city-owned statues on the tree-lined street to be taken down and sent to storage. Photo by Sandra Sellars

As of Wednesday, the four city-owned Confederate statues and two cannons had been taken off Monument Avenue, leaving only the state-owned statue of traitorous slavery-defender Gen. Robert E. Lee. The removal of his six-story, 12-ton statue is tangled in a still unresolved legal fight and an injunction issued by Richmond Circuit Court Judge Bradley B. Cavedo.

At the same time, the Richmond Police Department has stopped confronting the dwindling numbers of protesters whose energy and outrage over racism enabled City Hall to do what long seemed impossible — rid Richmond of its symbolic veneration of white supremacy.

The emergency action by Mayor Levar M. Stoney has been accompanied by efforts to remove Confederate symbols and names elsewhere. Along with a call from Gov. Ralph S. Northam for Virginia’s public schools to remove Confederate names — an action Hanover County is still resisting — James Madison University plans to rename three buildings, while the faculty at Washington and Lee University is urging a name change to eliminate ties with Confederate Gen. Lee.

In Powhatan County, Black students have been joined by a diversity group in calling for schools to ban Confederate flags and symbols from school grounds.

But Richmond remains the center of attention as it gets rid of the statues and prepares to rename at least one bridge and a portion of a major thoroughfare.

Just two Confederate statues remain in the city — an unblemished six-foot stone cross in Monroe Park honoring Confederate cavalry officer Fitzhugh Lee, a nephew of Gen. Lee, which is likely to be removed this week, and a statue of Ambrose P. Hill at Laburnum Avenue and Hermitage Road in North Side. It is proving tougher to remove because it sits atop his tomb.

Mayor Stoney began the official cleansing on July 1 using a declaration of a local emergency that City Council informally supported but has yet to officially ratify as required by state law.

Under the supervision of Richmond sculptor Paul Di Pasquale, an expert crew has removed the Monument Avenue statues of Thomas “Stonewall” Jackson, Matthew Fontaine Maury and J.E.B. Stuart, along with two cannons that marked Confederate defensive positions and the statue in Church Hill.

Work also is beginning to remove some of the figures on the pedestals to which the statues were attached, including the globe on the Maury statue saluting the Confederate naval commander for pioneering work on ocean currents and weather forecasting.

Of the 11 city-owned Confederate items, protesters previously toppled the Monument Avenue statue of Confederate President Jefferson Davis, as well as a statue of Gen. Williams Carter Wickham in Monroe Park and the Richmond Howitzers statue at Park and Harrison streets on the Virginia Commonwealth University campus. 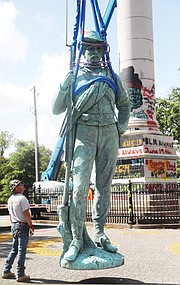 Another statue being removed is that of Joseph Bryan, a notorious racial bigot who used his daily newspapers in Richmond and his business connections to promote the “Lost Cause” narrative and to crush the voting rights, political influence and economic empowerment of African-Americans in Virginia.

Even while City Council has yet to formally endorse Mayor Stoney’s declaration of emergency, the statues’ fate is already certain: They will not return.

City Council, led by Dr. Cynthia I. Newbille, 7th District, has started the process of ensuring permanent removal of the 11 Confederate items on the mayor’s list using a new state law.

The council is scheduled to vote Monday, Aug. 3, on the removal ordinance that is now being advertised. All nine council members have committed to supporting the action, which would be voted on following a pro forma public hearing. The council also is in the process of gathering requests from people and entities who want to acquire the statues and would vote at later meetings on resolutions to dispose of them.

The action followed more than a month of protests over racism and police brutality that were sparked by a viral video showing the killing of an unarmed, handcuffed Black man, George Floyd, whose neck was pinned under the knee of Minneapolis police officer for 8 minutes and 46 seconds on May 25.

Protests over police abuse and racial injustice have sprung up around the nation and the globe, with demonstrations beginning in Richmond on May 29 and continuing daily since then.

Mayor Stoney first sought to quell the unrest by using an 8 p.m. curfew. That led to more than 230 arrests and ultimately a huge embarrassment after police, on June 1, fired tear gas and pepper spray into a peaceful crowd nearly 30 minutes before the start of the curfew.

Now under investigation, that incident and a video that a few days later showed a police officer driving his SUV into a crowd gathered on the grass around the Lee statue on Monument Avenue led to the ouster of Police Chief Will Smith.

City police, with the help of State Police and other law enforcement agencies, continued for weeks to use tear gas and rubber bullets to disperse nightly crowds. Fears of an attack on Richmond Police Headquarters led to the erection of large concrete posts in front of the building on Grace Street to block traffic and protesters.

Meanwhile, protesters’ demands grew louder, particularly for a civilian oversight board to handle complaints against police, along with mounting pressure from members of City Council eager to end the street warfare between police and protesters.

As of July 1, the same day the city’s new police chief, Gerald M. Smith, took charge, the police have stood down. State signs tell people they are subject to arrest for being in the park surrounding the Lee statue between sunset and sunrise, but police have not come.

About 50 people gathered in the area around midnight Tuesday, and some sought to attract resident and law enforcement attention by using a bullhorn to lead chants of “No justice, no peace,” but officers never came and it petered out.