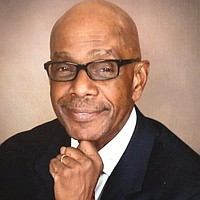 David Jerome Wall was known as “The Professor” in the Richmond Department of Public Works because of his knowledge of the department and the city.

In a career that spanned 36 years, the Rich- mond native was involved in virtually every aspect of the agency that helps keep up his hometown—from paving streets, filling pot- holes and collecting trash to mowing grass on city property, maintaining city buildings and managing traffic lights and parking.

Always dapper and unfailingly polite, Mr. Wall was considered a ray of sunshine at City Hall. City workers who knew him said he had a way of seeing the positive in any situation.

Mr. Wall, who received numerous awards for his work, started with the department in 1983 and rose through the ranks, serving in several supervisory positions including interim deputy director of general services and parking operations manager before retiring in February 2019.

His contributions are being remembered following his death Tuesday, June 30, 2020, after a brief illness. He was 68. His funeral was private.

Born in Richmond during the Korean War, Mr. Wall was a 1970 graduate of Maggie L. Walker High School. He went on to earn an associate degree at Clinton Junior College in Rockville, S.C., and his bachelor’s degree at Benedict College in Columbia, S.C.

He worked as a window display designer for clothing stores across the South for several years before returning to Richmond, where he taught in the city public school system for seven years before joining the city Department of Public Works.

Mr. Wall also worked on a variety of special projects for the department that ranged from consideration of using managed competition for solid waste and outsourcing of fleet operations to maintenance of the Richmond City Justice Center and the replacement of the computerized maintenance management system.

During his service with Public Works, he became a member of the International Parking Association, the Solid Waste Association of North America and the American Public Works Association.

The APWA honored him in 2004 with its leadership award, one of many awards and recognitions he received from his peers. Even after retiring, he returned to Public Works to assist with special projects from April 2019 to March.

At one point, Mr. Wall considered a career in entertainment. In the 1980s, he joined his brother and three friends to launch the AllUSWE Entertainment Production Co. According to his family, for five years, he spent his weekends serving as a DJ at various clubs and venues.

Mr. Wall converted to Catholicism in 1981 and was long associated with Holy Rosary Catholic Church in the East End, where he served as a lay reader, Eucharistic minister, usher and the sacristan who set up for Mass. He also served on the church’s pastoral council.

Using his craftsman skills and his experience from his days creating window displays, he was well known for designing and constructing the Nativity crèche for Christmas, suspending the Advent wreath and installing the seasonal drapes. He also built a cross and other items used in church programs.