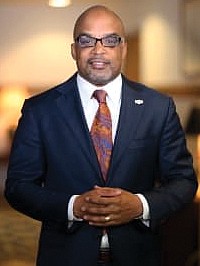 Virginia State University has become a prime example of the financial hits historically black colleges and universities are taking because of the coronavirus.

The 138-year-old institution is heading into the fall semester facing a potential 10 percent drop in enrollment, big losses in dorm and cafeteria revenue because fewer students will be allowed on campus and a potential $26 million operating deficit, according to information provided June 12 to the VSU Board of Visitors.

VSU President Makola M. Abdullah told the board, led by Huron F. Winstead of Richmond, that VSU is likely to have to dip into its $21 million reserve fund to cover some of the deficit, particularly payments on debt on residence buildings, and to make other hard decisions to balance spending and revenue.

Sagging enrollment has been a continuing unresolved challenge.

According to Kevin Davenport, VSU’s vice president of finance, the 2020-21 budget that goes into effect July 1 is built on a potential enrollment of about 3,900 undergraduate and graduate students, or nearly 440 students fewer than the 4,365 students enrolled last fall.

If that proves true, VSU would be facing its smallest enrollment in about 25 years. The school’s enrollment peaked in 2012 with about 6,200 undergraduate and graduate students and has remained in the range of 4,300 to 4,600 students in recent years. Enrollment has not grown since the arrival of Dr. Abdullah in 2016, state data show. Dr. Abdullah told the board that freshmen enrollment seems likely to grow a little this year and that enrollment could actually prove to be more stable than projected.

However, Dr. Zoe Spencer, who serves on the board as the representative of the VSU Faculty Senate, expressed skepticism. She noted at the meeting that the school plans to charge students who take classes remotely the same tuition as those who will participate in face-to-face classes. She expressed concern that some students would object to that approach and go elsewhere.

Currently, VSU plans to limit the number of students living on campus in the fall to 1,740, or about 1,100 fewer than the 2,840 who did so last fall. That would substantially reduce revenue from room rentals and meals sales, Mr. Davenport noted, and still leave VSU to pay $9 million to cover the annual repayment of debt on residence buildings.

At the same time, VSU also is facing increased costs to provide online classes. The board was told that VSU is investing $9 million in technology to provide a robust distance learning experience for students taking remote classes.

Dr. Abdullah noted the university has identified potential cuts to reduce the deficit by up to $10 million and limit the damage. That includes imposing a freeze on purchasing and hiring.

Mr. Davenport also noted that the university has received about $10 million in federal CARES Act funding and identified other resources, but said VSU is trying to find savings to avoid quickly using up that mostly one-time money.

However, Dr. Spencer warned the university could make it harder to recover if VSU sought to fill the budget gap by replacing full-time faculty with part-time adjunct professors who are paid far less.

She noted that educational quality could suffer and lead to questions from the school’s accrediting agency, the Southern Association of Colleges and Schools.

VSU was facing financial challenges before the pandemic. The board was told at its May meeting that VSU would need to come up with money to repay the National Institute of Food and Agriculture for mismanaged grants. By some estimates, the school could be required to repay between $6 million and $8 million.

The board was told that VSU had not identified where the money to pay NIFA would come from, but as Mr. Davenport put it at the time, it should not come from students in the form of increased tuition.