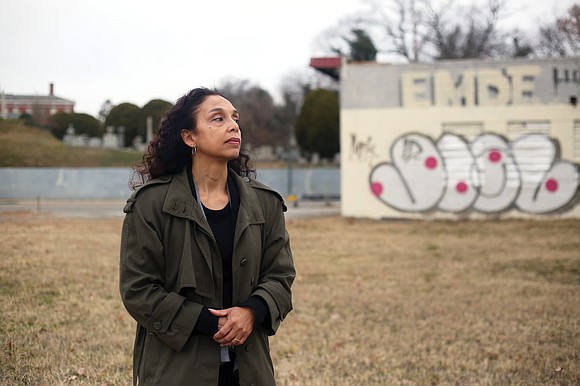 Lenora C. McQueen stands in the forgotten Grave Yard for Free People of Colour and For Slaves during a visit to Richmond. Behind her is the vacant, graffiti-marked mechanic’s shop at 1305 N. 5th St. In the background is the Hebrew Cemetery and the former white Richmond Alms House that now holds apartments for seniors. Photo by Regina H. Boone

A long closed mechanic’s shop sits on a hilltop at 5th and Hospital streets north of Downtown — just a stone’s thrown from the handsome, historic and well-tended private Hebrew and public Shockoe Hill cemeteries.

Hundreds of motorists and city buses pass the intersection daily, but few, if any, know that the once-thriving shop and car wash sit atop one of the largest public cemeteries for African-Americans — both free and enslaved — that the city established more than 200 years ago.

Long forgotten and off city maps, the Grave Yard for Free People of Colour and For Slaves opened in 1816 and became the burial ground for at least 22,000 people.

The Grave Yard replaced the original public burial site forAfrican-Americans at 15th and Broad streets, which also was forgotten until its rediscovery in the 1990s.

1 — The hilltop at 5th and Hospital streets that was part of the original Grave Yard for Free People of Colour and For Slaves, 2 — The enlarged footprint of the cemetery that grew through the years and sprawled south of Hospital Street, 3 — The northern portion of the forgotten Potters Field, the post- Civil War name of the cemetery, 4 — The location of the colored Richmond Alms House where residents were buried (the site is part of Shockoe Hill Cemetery), 5 — The white Richmond Alms House, now an apartment building for the elderly, 6 — Shockoe Hill Cemetery, 7 — Hebrew Cemetery, a portion of which incorporates a small section of the Potters Field

The city government initially set aside 1 acre for the burial of slaves and 1 acre for free African-Americans, many of whom preferred the private cemetery that a burial society established in Barton Heights a year earlier.

Over time, the Grave Yard was expanded to nestle two nearby creeks, Bacon Quarter Branch and Shockoe, both of which have run invisibly through underground pipes since World War I.

The Grave Yard also expanded west into land that 5th Street covers and to a section of property behind the white Richmond Alms House on Hospital Street, now senior apartments. The Colored Alms House, long ago demolished, sat on 5th Street beside Shockoe Hill Cemetery, and some residents also were buried on its grounds.

While it operated, there is evidence the Grave Yard became a favorite place for thieves to secure bodies needed by the Medical College of Virginia to train physicians before the state ban on human dissection was lifted. The majority of people buried there were poor.

The burial ground, renamed Potters Field after the Civil War, stopped being listed on city maps produced after 1905. But city leaders and most of the population appear to have forgotten the Grave Yard after it was quietly closed in 1879. Other public cemeteries replaced it, primarily the city’s largely forgotten Oakwood Colored and Colored Paupers cemeteries in the East End. They were developed across from the city’s then whites-only Oakwood Cemetery on land abutting the private, historic African-American Evergreen and East End cemeteries, which date to the 1890s.

Evidence of the collective community and government amnesia about the Grave Yard can be found in City Council’s approval of the city’s sale of portions for private development. The government also let railroad tracks run through it and authorized the state government to install in it the pillars holding up the elevated Interstate 64.

The memory of this African-American burial ground was so quickly erased that no one could explain the skeletons that turned up during the improvement of 5th Street in the1880s, the construction of a bridge or viaduct over Shockoe Valley to link Highland Park and Downtown in the 1890s and the development of industry sites.

Other public and private African-American cemeteries, such as Evergreen, East End and Barton Heights in and around Richmond, have gained renewed attention and care from individuals and public and private entities. The University of Richmond recently acknowledged building decades ago on top of an unmarked African-American burial ground and has begun seeking ways to make amends.

In one of the best-known actions, activists waged a successful 10-year battle to remove a parking lot and gain recognition for Richmond’s original public Burial Ground for Negroes, now called the African Burial Ground, at 15th and Broad streets.

However, only one lonely crusader is keeping up a sustained fight to gain respect, dignity and protection for the still unmarked Grave Yard.

That crusader lives 1,500 miles away.

Her name is Lenora C. McQueen. Born and raised in New Jersey, she is a genealogist living in Southern Texas.

Her only connection with Richmond is that at least one and possibly five of her ancestors were buried in the forgotten cemetery. But that has made her determined to protect the site from further desecration.

Ms. McQueen was sparked into action after she found documents proving that her enslaved, four times great-grandmother, Kitty Cary, was buried there.

Ms. Cary spent most of her life at the Morven plantation in southeastern Albemarle County that is now owned by the University of Virginia. She died in 1857 after being brought to Richmond as a servant of the widow of the plantation owner.

Bitten earlier by the genealogy bug and eager to trace her family’s roots, Ms. McQueen’s search led her to Morven. She said she discovered Ms. Cary’s name on a slave inventory during her research with two U.Va. faculty members, digital historian Scot French and archaeologist Steve Thompson.

In 2017, Ms. McQueen came to Richmond to search the archives of the Library of Virginia and the Virginia Museum of History and Culture. She turned up an 1857 letter from the widow of Morven’s owner to her sister telling her of Ms. Cary’s death in Richmond and interment in the Grave Yard.

The Grave Yard was on the museum’s list of area African-American cemetery sites. Ms. McQueen said she was confused by what she found. “I did not recognize the place at all as being anything that looked like a cemetery. I saw a highway running over it, and I thought my GPS had gone haywire,” she said seeing the unmarked, weed-and litter-filled location.

She said that Dr. Ryan Smith, a Virginia Commonwealth University professor who is completing a book on African-American cemeteries, confirmed she had the right place. Ms. McQueen has worked with Dr. Smith and others, including VCU Professor Shawn Utsey, who has documented the medical school’s use of African- American bodies, and Ana Edwards, a leader in the fight to protect the cemetery at 15th and Broad streets.

In the past three years, Ms. McQueen’s work on her family tree had led her to amass an extensive collection of documents about and maps of the forgotten site, which has fueled this story.

Ms. McQueen already has helped save the portion of the old cemetery on which the former mechanic’s shop sits. In May 2018, Ms. McQueen spotted a city advertisement that 1305 N. 5th St., the shop’s address, was to be auctioned for unpaid property taxes.

Alarmed, she emailed 6th District City Councilwoman Ellen F. Robertson to tell her about the cemetery and the public sale that was a few days away. Ms. Robertson notified the city, which pulled the property from the sales list. The city has left the property in limbo since then.

Mayor Levar M. Stoney acknowledges the importance of the site, but his administration hasn’t taken any steps to take ownership of the land or to mark it.

Ms. Robertson, too, has been publicly mum about Ms. McQueen’s findings. Ms. Robertson said she is engaged in creating “a protective and long-term strategy” for the property. She said there have been behind-the-scenes discussions about creating a commission modeled after the one Virginia Commonwealth University developed to deal with the remains of dozens of African-Americans found in a well on the campus in the 1990s during construction. The remains, likely stolen from the Grave Yard, Ms. McQueen said, had been thrown into the well before the Civil War after being used in MCV classes.

As a result of Ms. McQueen’s research, the city has altered its plan for realigning 7th Street to ensure any roadwork does not involve the Grave Yard. However, according to Ms. McQueen, the state has misrepresented the cemetery’s location to prevent disruption of its plans to widen the interstate in that area.

According to maps Ms. McQueen has dusted off, the original Grave Yard ultimately provided burials on both sides of Hospital Street and spilled down the steep slope of what was called Smith’s Hill.

While Ms. McQueen waits for the city to do something about the forgotten cemetery, she believes other officials are ignoring the potential impact on the Grave Yard from planned new tracks to accommodate high-speed trains.

She has notified state and federal officials that their plans for adding a third set of rails for passenger trains would bring the new line into the cemetery.

“I remain very concerned,” Ms. McQueen said, now that the plan for new tracks into Richmond’s Main Street Station has been approved.

She is certain that if and when such work takes place, work crews would turn up the remains of unknown African-Americans buried there long ago, just as has happened during previous road and construction projects.

“How long must that keep happening?” she said. “Our ancestors deserve to rest in peace.”