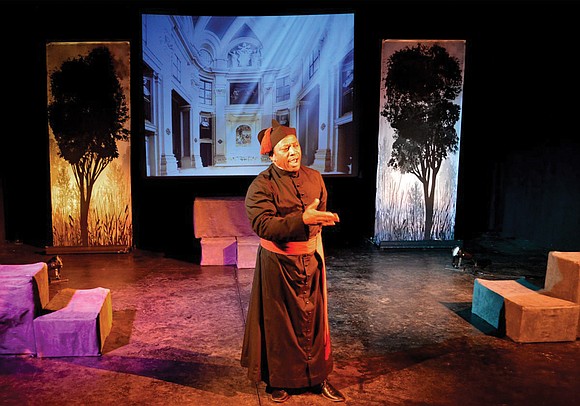 PASADENA, Calif. Actor Jim Coleman stood at the front of a dimly lit stage and recounted the joys and hardships of being a black man of Catholic faith. As the star of the play “Tolton: From Slave to Priest,” Mr. Coleman was portraying the life of the Rev. Augustus Tolton, the first known African-American to serve as a Catholic priest in the United States.

Rev. Tolton, born into a family of enslaved people in Missouri, escaped during the Civil War with his mother and siblings and settled in Illinois. His father had already escaped to join the Union army and his family later learned of his death.

In Illinois, Rev. Tolton, who had been baptized in his former owners’ Catholic faith, faced pushback from peers and parents while attending all-white Catholic parish schools, according to Rev. Tolton’s biography provided by the Archdiocese of Chicago.

Undeterred, Rev. Tolton pursued the priesthood, studying in Italy after U.S. seminaries refused to admit a black man. He was ordained at the age of 31 in 1886.

In the play, Rev. Tolton refers to the United States as “foreign land” where, after “living in freedom for six years,” he returned after finishing the seminary.

Rev. Tolton was sent to Chicago, where he helped oversee the construction of St. Monica’s Catholic Church, an African-American parish. Known as “Father Gus,” Rev. Tolton spent much of his career seeking help for the poor in the community.

In June 2019, Pope Francis officially declared that Rev. Tolton “lived a life of heroic virtue,” and the priest is now on the path for sainthood.

His cause for canonization was opened by the Archdiocese of Chicago in 2010.

In Pasadena, the seats were filled for a showing of the play at St. Andrew Catholic School in mid-February. Some cheered and others cried as the play demonstrated how Rev. Tolton’s faith helped him cope with the racism he encountered before he went into the seminary.

“People need to see that their spiritual life can help give them the strength to persevere in troubling times,” said Edwina Clay, president of the Altadena/Pasadena Black Catholic Association, who said the play was still relevant.

The Archdiocese of Los Angeles, which hosts Masses in about 40 languages, has been lauded for its diversity, but in its more than 80-year history, only one U.S.-born black pastor has served in its parishes.

It’s a problem that spills down to the pews, Ms. Clay said. “If young people don’t see folks who look like them, they don’t have any aspiration to be like them.”

Black Catholics have made up a stable 3 percent of U.S. Catholic membership for decades, with significant numbers of African-Americans in dioceses in Brooklyn, N.Y.; Los Angeles; San Bernardino, Calif.; and Baltimore, according to the United States Conference of Catholic Bishops.

To Anderson Shaw, director of the African-American Catholic Center for Evangelization, the play helps bring visibility to the black Catholic community in the United States.

“By having visibility, it allows us to have a voice,” Mr. Shaw said.

The play, he said, is not simply a reaction to past injustices.

“One can get encouragement and inspiration from stories,” Mr. Shaw said. “Our intent is to inspire people, to encourage them to lift themselves up when things get a little tough.”

Mr. Shaw said the play was included in a pastoral plan that came out of a 2017 meeting of the National Black Catholic Congress that addressed the lack of African-American priests.

In the pastoral plan, the group pledged to stand against racism and to work on issues such as mass incarceration and domestic violence, Mr. Shaw said.

“You have people saying the church is not racist,” he said. But if you ask parishioners if they have experienced racism in the church, “the answer is going to be yes.”

Local parish leaders and congregants need to do more to draw African-Americans into the priesthood, he said. There can be pastoral plans, Mr. Shaw said, but “the people in the pews don’t relate to that.”

As a sign of progress, Mr. Shaw pointed to the Rev. Jeffrey Harvey, an African-American Vincentian priest, who is teaching homiletics — the art of preaching and delivering sermons — at St. John’s Seminary, where men are pre- pared for the priesthood in the Los Angeles archdiocese.

African-Americans are big on preachers, Mr. Shaw said. “If you ask them what was the most important part of the Mass, it’s the singing and preaching,” he said.

To have Rev. Harvey teaching Los Angeles’ next generation of priests how to preach is significant, he said.