Gov. Northam moves to reopen Virginia on May 15 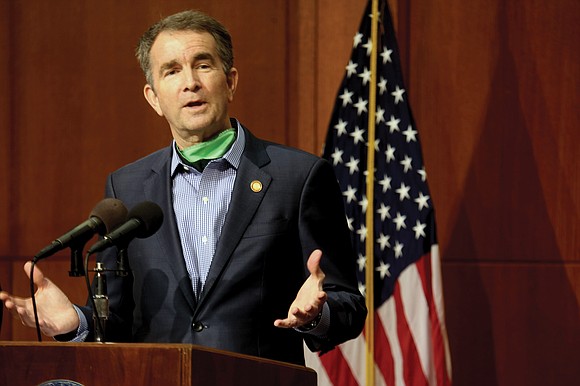 Gov. Ralph S. Northam notes that COVID-19 invaded the state two months ago as he updates reporters on the plan for reopening businesses at a news conference Wednesday. He also saluted nurses in honor of National Nurses Day and praised the soldiers in the Virginia National Guard for their work to combat the disease. Photo by Regina H. Boone

Movie theaters, barber shops and hair salons, restaurants and a host of other businesses deemed non-essential could begin to reopen Friday, May 15.

Almost two months after the first positive cases of the coronavirus were discovered in Virginia, the state is preparing to open the road to recovery, though it could be a long and bumpy one.

“Our lives and our world have changed a great deal,” Gov. Ralph S. Northam said during Wednesday’s media briefing. “We’re now at a place where we can think about our next steps.”

While some other states already have allowed businesses to reopen, the governor began the week saying that Virginia would wait an additional week.

His Executive Order 53 that began the shutdown on March 24 originally scheduled the reopening to start this Friday, May 8.

Gov. Northam, a physician, and administration health officials acknowledged Monday that the number of COVID-19 cases and deaths are likely to rise with the reopening.

As of Tuesday, the number of positive cases of COVID-19 in Virginia had risen to 20,256, with deaths totaling 713.

The state Health Department also reported that 2,773 people are hospitalized with coronavirus and the state has 244 outbreaks.

Despite the rising numbers, disappointed businesses owners whose livelihoods are at risk hoped Gov. Northam would allow the reopening this week. They pointed out that hospitals and medical operations were granted permission to restart elective surgeries and procedures last week.

Gov. Northam said that when the full range businesses do reopen — and some will not because of the financial damage they have suffered from the shutdown — residents should expect noticeable changes.

At the very least, restaurants will need to seat customers farther apart, and their employees will need to wear face masks. Private gyms will have to limit the number of participants to maintain the required personal distance.

Gov. Northam said the state will issue new guidelines for specific industries in the coming days, the first to come on Friday.

He said he anticipates the reopening to take place in three phases, with guidance on how businesses, churches and other operations ease into each phase. Each phase, he said, could last three weeks. He also encouraged local governments to take stronger measures, if necessary, during this process.

Some people think the reopening is too fast, given the state’s dismal status near the bottom of the 50 states in providing widespread testing for COVID-19.

The Virginia Legal Aid Justice Center scolded Gov. Northam for kowtowing to the business community, rather than putting a higher priority on the health of workers.

“We stand in solidarity with community leaders who have implored Gov. Northam to resist corporate pressure to jeopardize the lives and livelihoods of low-wage workers, confined populations, and communities of color,” the statement read.

“Until we can reliably deliver basic public health protections and care — especially to marginalized communities — and take aggressive steps to minimize the cruel and inequitable effects of the pandemic, Virginia must stay closed for business,” the statement continued.

“There is no acceptable margin of lives lost or families devastated that justifies prioritizing economic pressures over the health and safety of people, especially when black and brown Virginians would bear the brunt of this deadly calculation,” the statement concluded.

Still, Gov. Northam said the message he is sending is that Virginia will reopen “next week,” well before June 10, which he previously had indicated might be the date.

The reopening also would come before the state actually meets the tests that the Northam administration laid out in its “Forward Virginia Blueprint” unveiled on April 24.

Those requirements included 14 days of declining positive tests and hospitalizations from COVID-19, a surplus of hospital beds and intensive care space and an increasing and sustainable supply of personal protective equip- ment to expand testing and tracing.

The state Health Department’s daily reports at www.vdh.gov suggest the number of cases has not yet begun to decline, although the number of hospital beds and intensive care beds for treatment has remained more than adequate. However, Gov. Northam has faced pressure from Republican lawmakers and others urging a faster reopening on a quicker pace, similar to other Southern states.

“The governor’s decision to use a ‘one-size-fits-all’ approach is going to negatively impact certain parts of Virginia worse than others,” Republican House Minority Leader C. Todd Gilbert of Shenandoah County said in a statement.

These calls and similar ones, including a request from Virginia Beach Mayor Bobby Dyer to include the city’s beaches as part of Phase One reopenings, are pouring in despite more coronavirus cases being confirmed daily.

The federal Centers for Disease Control and Prevention on Tuesday called this period “the acceleration phase of the pandemic,” when the length and severity of outbreaks could increase based on people’s willingness to maintain restrictions and the public health response.

A flashpoint for many of the state’s issues can be found in its meat and poultry processing plants, where fears of potential outbreaks and a lack of public information has led to protests by workers and advocates.

More than 260 cases of COVID-19 have been identified within two poultry plants on Virginia’s Eastern Shore, days after President Trump signed an executive order requiring meat processing facilities to stay open to prevent supply shortages and disruptions. The federal government also has plans to provide liability protections for companies if employees contract the virus as a result of returning to work.

Gov. Northam stressed that he recognizes the need for further action in Virginia and has directed the state Department of Labor to ensure facilities are following federal health and safety guidelines. He also has spoken of efforts to ensure worker safety at the plants, noting that the majority of workers at risk are low-income people of color.

He said teams from the state Health Department and the federal CDC are preparing to undertake large-scale testing to identify and isolate the infected.