Minneapolis police officers fired after cell phone video shows one kneeling on the neck of George Floyd, who later died. 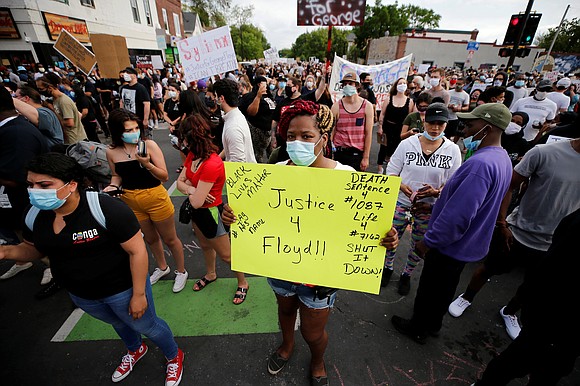 A sea of protesters gather at the site in Minneapolis where a white police officer intentionally kneeled on the neck of George Floyd. Mr. Floyd later was pronounced dead at a nearby hospital. Photo by Eric Miller/Reuters

Four Minneapolis police officers have been fired in the wake of the brutal death Monday of George Floyd, a 46-year-old father and security guard, who died after being handcuffed by police and put face down in the street, where a white police officer knelt on his neck for several minutes.

A graphic video, shot by one of several horrified bystanders, has gone viral on social media and shows Mr. Floyd lying face down in the street, gasping for air and groaning, “I can’t breathe,” while the officer continues to kneel on his neck.

During the 10-minute video, the crowd pleads with the officer to stop. 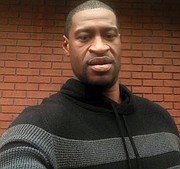 At one point when one of the bystanders moved toward the officer and Mr. Floyd, the officer pulled out a canister of mace and pointed it at the group.

After several minutes, ambulance workers arrived and loaded a seemingly unconscious Mr. Floyd onto a stretcher and took him away. Mr. Floyd’s hands had been handcuffed behind his back.

The death has unleashed a firestorm around the nation and in the Minnesota city of 429,600 people, of whom nearly 20 percent are African-American and another roughly 10 percent are Latino. Protesters, politicians, activists and Mr. Floyd’s family have called for the officers to be charged with murder.

Minneapolis Mayor Jacob Frey announced the firing of the officers on Twitter on Tuesday, saying, “This is the right call.” At a news briefing on Tuesday, the mayor said it was clear the death of Mr. Floyd in custody was unjustified and that race was a factor.

“Being black in America should not be a death sentence,”

Mayor Frey said. “For five minutes we watched as a white police officer pressed his knee into the neck of a black man. For five minutes. When you hear someone calling for help, you are supposed to help.”

Minneapolis Police Chief Medaria Arradondo told reporters that the FBI has opened an inquiry at his request into the fatal arrest, and the state’s Bureau of Criminal Apprehension, which investigates most deaths that occur in police custody, also has launched a probe. The bureau will present its findings to Hennepin County prosecutors.

The case was eerily reminiscent of the 2014 killing of Eric Garner, an unarmed black man in New York, who died after being put in a banned police chokehold. Mr. Garner’s dying words, “I can’t breathe,” became a rallying cry for the Black Lives Matter movement calling attention to a wave of African- Americans and other minorities who died at the hands of police using unjustified lethal force.

According to published reports and a police department account, the Minneapolis officers involved in Monday’s encounter were responding to a report of a forgery in progress in which a convenience store had confronted a man about a “fake $20 bill.” Police found a man fitting the suspect’s description, Mr. Floyd, in a car. After Mr. Floyd got out of the car, the police department said, there was a physical altercation between the officers and Mr. Floyd. Mr. Floyd was handcuffed, and he appeared to be in medical distress, according to police.

But Mayor Frey told the media Tuesday that as additional information was revealed, “it became clear that the original (police) statement was not accurate.”

Cell phone video taken by an onlooker Darnella Frazier does not show what precipitated the confrontation. It opens with Mr. Floyd lying beside the rear wheel of a police vehicle, with an officer pinning him to the street by pressing a knee into Mr. Floyd’s neck, while another officer holds the onlookers back.

Mr. Floyd can be heard repeatedly moaning and gasping while he pleads, “Please, I can’t breathe, please, man,” as bystanders gather around, growing increasingly agitated and shouting at police to let him up. After several minutes, Mr. Floyd gradually grows quiet and ceases to move.

Attorney Benjamin Crump, who has gained a national reputation for representing families in unlawful death cases such as Trayvon Martin in Florida and Michael Brown in Ferguson, Mo., has been retained by Mr. Floyd’s family. He said in a statement that officers’ “abusive, excessive and inhumane use of force cost the life of a man who was being detained by the police for questioning about a nonviolent charge.”

Hours after the officers’ dismissals were announced, thousands of protesters filled the streets around the scene of the deadly incident in a boisterous but peaceful rally. Many in the crowd wore facial coverings to protect against the spread of the coronavirus.

But the gathering took an unruly turn around dusk Tuesday as police in riot gear fired tear gas and non-lethal bean-bag rounds into the crowds, while protesters hurled water bottles and other projectiles, the Minneapolis Star-Tribune reported. The unrest appeared to have dissipated after dark as rain fell.

On the “Today Show” Wednesday morning, Mr. Floyd’s sister, Bridgett Floyd, said the officers should be charged with murder “because that’s exactly what they did. They murdered my brother. He was crying for help.”