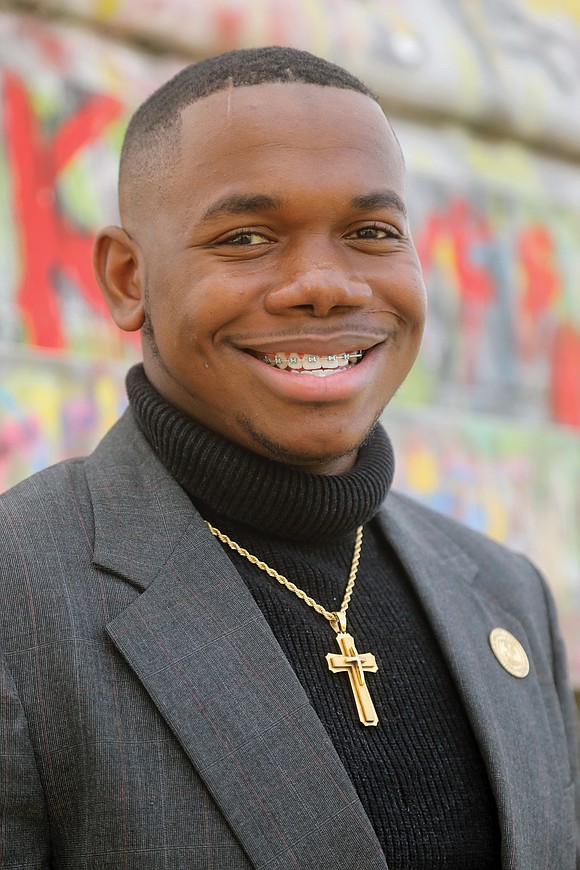 For Virginia students, the last year has been filled with sudden changes amid a period of upsets and unrest.

For 17-year-old Corey Stuckey, his year has been one of big ambitions, both for his educational future and for his work as a key part of the 381 Movement.

The New York native and George Wythe High School senior co-founded the 381 Movement with Justice Peebles earlier this year in response to the protests across America that followed the murder by Minneapolis Police of George Floyd “and the deaths of hundreds of others failed by the system.”

“Our collective goal is to reconstruct the systemic racial foundation that this nation was founded on and to cultivate our own foundations,” says Corey, the middle child of Deirdre Wallerson who wants to go attend Morehouse College next year. “By using a solution-based lens, we will empower, educate and evolve the community.”

The organization’s name comes from the 381 days of protests Dr. Martin Luther King Jr. and others organized and launched against the segregated public transit system in Montgomery, Ala. The 381 Movement has plans to match that number, with the nonprofit organizing multiple protests throughout the year in the wake of police killings across America. Its latest action was a justice rally, the Black Coalition of Change Justice Rally to Unify and Empower the Black Community, sponsored with a coalition of groups last Saturday at Mount Olivet Church in Church Hill.

The 381 Movement is made up of experts, activists and community leaders all working to end America’s systemic racial injustice through a “four-pronged approach” built around research, education, legislation and volunteerism, Corey says.

While the 381 Movement has focused a lot of energy and attention on police brutality, it also has a number of other issues it plans to address across those 381 days, including school reform, economic stability, education, community outreach, and reassessing and reshaping the foundational laws of the United States.

Already, the 381 Movement has worked to educate the public on their history and rights they may not be fully aware of or that have been intentionally obscured. The organization also has worked with uplifting, strengthening and unifying the community, and improving the minds and souls of the people to help ensure a more prosperous Richmond and nation, Corey says.

As co-founder, Corey’s role runs the gamut, from community outreach and networking to motivating and empowering 381 members and the Richmond community by showing that a brighter day is coming and “bringing that baby boy joy to the team.”

Corey doesn’t seem burdened by the many tasks before him. He feels his age will be a significant factor in ensuring the 381 Movement’s success.

“I am able to reach both generations,” Corey says. “Being part of the younger generation, I can be that connection between the youths’ needs and passions and the needs and guidance of the wise.”

Meet a young man with passion, energy and vision and this week’s Personality, Corey Stuckey:

No. 1 volunteer position: Co-founder of 381 Movement and chief executive officer of Collateral Sports.

Education: I am currently a 12th-grader at George Wythe High School.

Where I hope to attend college: Morehouse College in Atlanta.

What I plan to study: Psychology and sociology.

381 Movement is: A nonprofit organization of experts, activists, lawyers, volunteers and community leaders whose mission is to be the solution to racial-social injustice.

381 Movement’s mission: Our collective goal is to reconstruct the systemic racial foundation that this nation was founded on and to cultivate our own foundations. Our four-pronged approach is based on research, education, legislation and volunteerism. By using a solution-based lens, we will empower, educate and evolve the community.

Co-founder and role: I play many roles. I am a huge part of outreach and networking within the community. I motivate and empower the community and our team by continuously showing that a brighter day is coming and, by doing so, bringing that baby boy joy to the team.

Significance of the number 381: Dr. Martin Luther King Jr. helped lead a bus boycott in Montgomery, Ala., for 381 days without any form of social media to end the segregation of public transportation. The people involved in the boycott walked past all buses through rain, hail, sleet or storms to prove that without us, there is no economy. That powerful movement sparked something great. So in honor of the late, great Dr. King, the 381 Movement will peacefully protest for 381 days to demand change from our legislators and leaders to prove the same message as our late leader — that we are the economy and that this world needs to open its eyes because the future lies within us. We need to make the change. Racism, police brutality and systemic racism need to end.

Who makes up the 381 Movement: The community. This movement is for the people, by the people!

Significance of being a part of this movement as a high school student: I am able to reach both generations. Being part of the younger generation, I can be that connection between the youths’ needs and passions and the needs and guidance of the wise.

381 Movement and summer uprisings: We aren’t putting out any information until further notice, but will be updating the community really soon.

Number one goal of 381 Movement: To be the solution to the 500 years’ worth of reoccurring generational curses.

How 381 Movement handles COVID-19: We are committed to bringing awareness and safety tools to the community to use in order to keep everyone healthy.

Lessons learned during this pandemic by 381 Movement: To keep safe and aware by wearing a mask, washing your hands and keeping out of huge crowds without proper safety protocols.

381 Movement partners with: Other organizations for the people. The list is still being created.

381 Movement’s upcoming events: We will be posting on our social media platforms.

Ways to be involved with 381 Movement: Come out and support, donate and contribute your time, energy and money back into the community. One hundred percent of all donations go back into fighting the bigger fight.

How I start the day: I start the day by doing my schoolwork, of course making sure that my education is the best it could be. Then I look at the news to stay updated on any changes while I was sleep. After that, I go out into the community and actually look and feel my communities’ pain and suffering so we, as a collective, can create better solutions because “who knows the problems in the community better than the community.” Then I end my day by writing and processing everything just to start it all again tomorrow.

Three words that best describe me: Compassionate, motivational and persistent.

How I unwind: Playing basketball and writing speeches and stories.

Something I love to do that most people would never imagine: I love to sing and play my instruments, and lifting up the next person.

A quote that I am most inspired by: It’s a quote I wrote a long time ago: “Not everyone can be a visionary, but everyone can see a vision.” — Corey Stuckey

At the top of my “to-do” list: Make sure I leave a mark on this world no matter how I do it and leave a message within every person I speak to.

The best thing my parents ever taught me: To never settle for anything other than success.

The person who influenced me the most: Myself. I have been my biggest influencer. I am influenced by me because in 10 years, I know that there is always a better me to look forward to, so I continue to be inspired by all the possibilities to come.

Book that influenced me the most: “The New Jim Crow” by Michelle Alexander.

What I’m reading now: Nothing at this moment. I’m in the process of writing my own novel.

Next goal: To get accepted to my No.1 college of choice — Morehouse College.