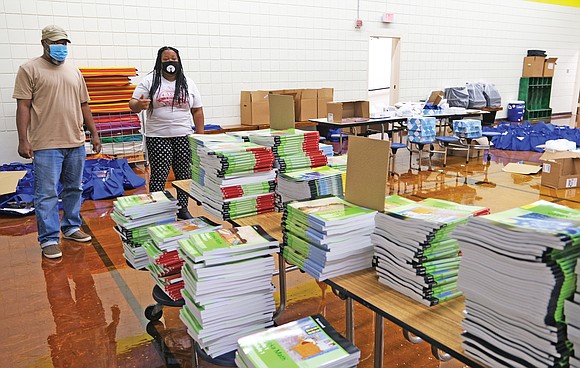 Shayla D.B. Holman, right, principal of Overby-Sheppard Elementary School in North Side, and Assistant Principal Duane Samuels survey a room packed with books and other items that parents were to pick up between 2 and 5 p.m. Thursday so students could be ready for the start of online classes Tuesday, Sept. 8. Photo by Regina H. Boone

As Richmond Public Schools launches a new school year Tuesday, Sept. 8, with all virtual learning, parents and students are grappling with the reality of not having face-to-face instruction.

Parents’ questions are very simple: Will RPS have adequate services and resources to keep my child on track academically and at the right grade level?

Even with school officials having worked long and hard during the summer providing professional development and teacher training for virtual instruction to ensure students will be engaged and captivated, parents are still anxious and see virtual learning as a challenge they have to overcome. Many show and express their fatigue as they face a fall semester having their children learning at home — a situation they have been dealing with since March when public schools were closed statewide to stop the spread of the coronavirus.

Katima Melmx has two sons in RPS, both of whom will be 11th-graders at John Marshall High School. While her son, Marcus Brooks, 16, has John Marshall as his home school, he attends CodeRVA Regional High School. Her son, Kevaugha Brooks, 17, goes to the Richmond Technical Center. Both have Individualized Education Programs, or IEPs, focusing on learning through their attention-deficit/hyperactivity disorder, or ADHD.

“Both Marcus and Kevaugha didn’t want to work at home when school closed in March. They didn’t like it,” Ms. Melmx said. “They are upset with September’s virtual school schedule and the schools’ hours.”

Her concerns center on staying on top of her sons to help them stay organized, get their work done and turned in on time, as well as keeping them engaged in the virtual world because they get bored quickly.

Because her sons are new to John Marshall, Ms. Melmx said she is trying to get to know the support staff at the North Side high school. They previously attended Armstrong High School, where Ms. Melmx said she had an exceptional rapport with their teachers and counselors.

Marcus has attended CodeRVA since ninth grade. The school, located now on the campus of Virginia Union University, is an innovative, regional high school that prepares students for college and careers in computer science and coding.

Ms. Melmx said CodeRVA instructors prepared Marcus’ IEP in June because he struggles a lot with his attention span. She said the IEP provides a lot of one-on-one time for him with instructors and counselors as well as breakout sessions so that he is not on a computer most of the day. She is uncertain how that will be handled in the fall, whether by Zoom, by phone or in-person at their home.

“On the other hand,” Ms. Melmx continued, “Kevaugha wants to be an electrician.” She said he likes the Richmond Technical Center. “He was upset that he can’t do the hands-on activity.”

Parents and guardians of children in the lower grades expressed similar concerns about keeping their children engaged with virtual learning. But some new students are embracing the change.

Kathy MacMillan’s niece, 4-year-old Sha’Mya McBride, is excited about going to pre-school at Ginter Park Elementary in North Side. She has been walking around with her electronic tablet waiting for school to begin.

“Sha’Mya also has an RPS-issued Chromebook and she has gotten the hang of it after working with it this summer,” Ms. MacMillan said.

“I really don’t have any concerns about her going to school virtually, but it would be better if she was in the classroom with her teacher and classmates.”

Kapri Harris is worried about her two children who will be attending Richmond schools for the first time this fall. They attended Henrico County Public Schools in the past and used Chromebooks there. But Ms. Harris said the family hasn’t totally plugged into RPS’ website or Facebook page and hasn’t been able to get new laptops from the city school system.

Ms. Harris said she was uncomfortable with virtual learning at first because she was concerned her children would not do their work, especially when she is working away from home.

But now, her sister is living with her and will be home during the day and can check on the children, Ms. Harris said. She said her comfort level with virtual learning is much better.