Pink and green, OK; but no AKA symbols around campaign of Kamala Harris

The sorority, the oldest of the historically African-American Greek-letter sororities, was started in 1908 on the campus of Howard University, Sen. Harris’ alma mater.

Sen. Harris pledged AKA during her undergraduate years, a connection she proudly mentioned during her vice presidential nomination acceptance speech on Aug. 19 at the virtual Democratic National Convention.

But as the Nov. 3 election draws closer and people around the country are energized to work for their favored candidate, officials at the AKA’s national headquarters in Chicago have sent out a warning to its more than 300,000 members in more than 1,000 chapters in the United States: Get-out-the-vote efforts are fine, but avoid direct sorority involvement in partisan politics to protect the sorority’s tax status. 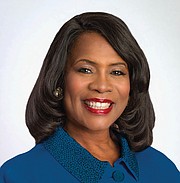 Contacted about the two pages of guidelines that have been circulating among sorority members with the dos and don’ts of political activity and endorsements, Dr. Glenda Baskin Glover, international president of Alpha Kappa Alpha Sorority, was circumspect in a recent Free Press interview.

“We are extremely proud of Kamala,” said Dr. Glover, who also is president of Tennessee State University in Nashville. “She has the qualities we, as HBCU leaders, impart to our students. She possesses all the qualities of qualifying as vice president.”

Beyond that, Dr. Glover said, she would offer no more comments.

Dr. Glover knows when it comes to politics, members had better dot their I’s and cross their T’s, asserting she and peer Greek-letter organization leaders need to make sure they are aware of rigid federal campaign laws and regulations. They need to make sure they do not endanger the federal tax-exempt status of their respective nonprofit organizations—even as members may be rooting for Sen. Harris and others and as the candidates and political parties are looking to the organizations for support.

Dr. Glover, a certified public accountant whose credentials also include a MBA and a law degree, cited federal election laws and contribution disclosure rules and regulations as why she could say no more as a nonprofit organization officer and spokesman about Sen. Harris.

The home stretch of the political campaign season will collectively cost hundreds of millions of dollars, most coming from nominal campaign contributions from voters and supporters including members of Black Greek-letter organizations.

Dr. Glover declined to share precise details of a recent confidential memo sent to AKA leaders on “guidelines” regarding political endorsements.

“I have communicated with them (AKA leaders) on what can and cannot be done,” she said.

However, an unofficial copy of the AKA guidelines obtained by the Free Press lists more than a dozen points that run the gamut from abiding by rules stemming from federal election laws to sorority protocol when hosting official events.

“Do not refer to the candidate as ‘Soror.’ ”

But pink and green, the sorority’s traditional colors, are “universal colors and can be worn while participating in political activities as long as the symbols and sorority name are not printed, referenced or displayed in any way.”

Sorority members are authorized to wear paraphernalia at non-partisan, political activities such as voter registration drives or get-out-the-vote efforts.

Members are not authorized to endorse a political candidate or make a political contribution on behalf of the sorority, but political activity in their individual capacities is permitted and must be made “clear and unambiguous.”

Talking points can be obtained from the AKA’s regional directors, but “Madam Supreme Basileus Glenda Glover is the Chief and ONLY spokesperson for the Sorority.”

“The AKAs are a tax-exempt organization,” Dr. Glover stressed, as she reasserted the significance of her message to the sorority’s members. “As such, we do not endorse candidates or political issues. In their individual capacities, members can endorse any political issue, any candidate they want,” she added.

Dr. Glover’s move was applauded by attorney Lezli Baskerville, president and chief executive officer of the National Association for Equal Opportunity in Higher Education, a Washington, D.C.- based, advocacy organization for the nation’s 108 historically black colleges and universities.

Ms. Baskerville noted that election time is usually when college campuses are busy with political debates, voter registration campaigns and running polling places at or near campuses.

She said Dr. Glover’s guidance to the AKAs, which she had not seen in detail, is good advice for Black college Greeks and complements the role Congress mandates for higher education under federal law.

“Many college presidents are not aware of what they can and cannot do,” Ms. Baskerville said, including requirements that “institutions engage in civic participation.”