Spotlight on the winner of ESRI’s 2020 Educational Map Contest 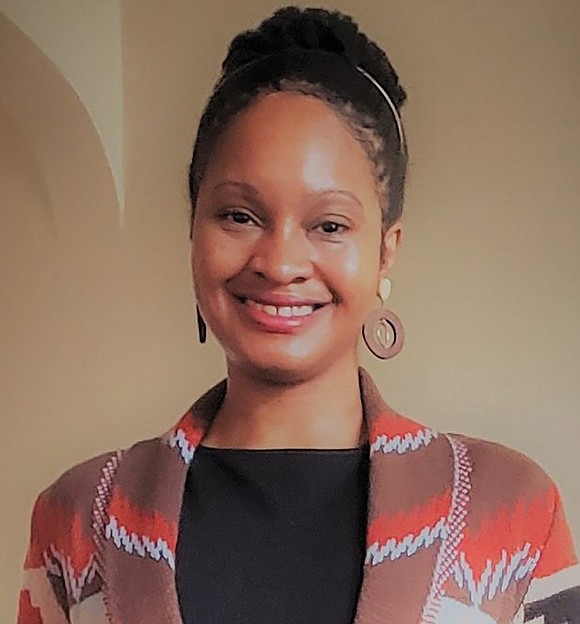 And it has been recognized by the Environmental Systems Research Institute with a first place award in the institute’s 2020 Educational Map Contest.

“I thought that I was going to pass out on my floor!” says Ms. Sparks, describing her reaction to the news of her win. “I had to pinch myself to ensure that I was not dreaming. I could not believe it!”

The map is part of an interactive project, “Planned Destruction: A brief history on land ownership, valuation and development in the City of Richmond and the maps used to destroy black communities.”

It details the efforts of Richmond authorities during the 1930s and 1940s to intentionally displace residents from the city’s Black communities and destroyed neighborhoods for generations—from depriving communities of grocery stores to dividing the city between Black and white communities and leading to greater poverty and lower property values in Black areas.

“Maps are powerful. They can promote and elevate a space or omit and destroy a space,” says Ms. Gray, who hopes that cartography can be used to reverse the negative impact of redlining and similar urban planning methods.

A native of Charlotte, N.C., Ms. Sparks was working as a user support specialist in the University of Richmond’s Boatwright Memorial Library and was completing a GIS, or geographic information system, certificate program offered at the university when she began developing the map.

The research and energy she put into it, Ms. Sparks says, started as an “outlet for grief, anger and a feeling of powerlessness” after the 2017 killing of her cousin in Whitcomb Court. Around that time, she was part of the Richmond 300 Advisory Council that was drafting the city’s latest comprehensive plan. She learned how Whitcomb Court’s development was “rooted in urban planning theories and schemes that were discriminatory and patriarchal.”

It propelled her to continue her work on her story map, which is dedicated to her cousin and other childhood friends who she says lost their lives to violence in Richmond. They were young Black men “whose lives were cut short due to boundaries and restrictions created and implemented by people who did not value Black lives,” she says.

Ms. Sparks says she hopes her map “leads to actions and concrete changes that save Black lives.”

Her winning story map will be on permanent display in ESRI’s Map Gallery online at mapgallery.esri.com.

Looking ahead, Ms. Sparks plans to continue her documentation of the Richmond neighborhoods that were razed during urban renewal, with Parkwood Avenue mentioned as a potential subject for the next part of her project.

She also has an interest in educating those affected by urban planning.

“My first goal is to inform under-represented people of the importance of engaging in the comprehensive planning process,” Ms. Sparks says.

“The devastating impact of urban renewal is relevant and still felt today,” she says. “It is the elephant in the room that needs to be discussed if we are going to have the monumental change that we truly desire.”

Meet a cartographer who is engaged with the city’s past and future and this week’s Personality, LaToya Gray Sparks.

Family: My husband, Jim Sparks. We got married on June 20 of this year!

Topic of winning map: This digital story map offers a brief history of the first master plan of the City of Richmond and examines the maps that were used to destroy Black neighborhoods during the urban “renewal” period. It also features a map I created that documents the people and places displaced from Downtown during this time.

Judges’ reasons for awarding map the top prize: It was selected for its technical innovation, visual design and the unflinching way in which it challenged users to think about difficult issues like racial segregation and redlining.

First reaction to the news of winning top award: I thought I was going to pass out on my floor! I had to pinch myself to ensure that I was not dreaming. I could not believe it! I then reached out to my husband to tell him the good news. He encouraged me to take the GIS class.

What this award means: The research and amount of energy that I placed in creating this project started as an outlet for grief, anger and a feeling of powerlessness. My cousin, Marcus Massenburg, died in Whitcomb Court three years ago. His death occurred around the same time that I started my work on the Richmond 300 Advisory Council, which recently produced a pre-final draft of the city’s 2020 comprehensive plan. For me, the experience was a crash course in urban planning. I learned that the development of Whitcomb Court was rooted in urban planning theories and schemes that were discriminatory and patriarchal and recommended by Harland Bartholomew, who was a racist. His 1946 plan has resulted in devastating and tragic consequences for multiple generations. My story map is dedicated to my beloved cousin, as well as a few other childhood friends who lost their lives to violence within this city — young Black men whose lives were cut short due to boundaries and restrictions created and implemented by people who did not value Black lives. In short, this award was not only recognition of years of work, but the final product of a personal and painful journey that I hope leads to actions and concrete changes that save Black lives.

When and why I became interested in conveying information through maps: Maps are powerful. They can promote and elevate a space or omit and destroy a space.

When Harland Bartholomew was studying Richmond, he purposely sought and mapped the areas where Black people lived. Those planning maps, in conjunction with the use of the Home Owners’ Loan Corp., or HOLC, maps, were used to target areas where black people lived for programs like “slum clearance,” which resulted in destruction and displacement. Maps were used to provide the blueprint for that devastation. It is my hope that cartography can be used to reverse that devastation, to “un-design the redline,” which is a movement presently taking place in other cities.

Skills needed to make a competitive informational map: A willingness to learn a new digital platform. I say that as someone who has been averse to learning new technology. I also would recommend persistence, patience and your perspective. We all bring our own lens when interpreting data. Also, if you are creating a story map, which is my preferred platform, then the ability to tell an engaging story is helpful as well.

How my research and map can help Richmonders: My first goal is to inform under-represented people of the importance of engaging in the comprehensive planning process. Comprehensive plan- ning can seem technical, dry and not exciting. But it is an opportunity to shape and have an influence on the future of your community. So, if you can become engaged, then please do so. Also, I believe there needs to be a concerted effort to recognize and honor spaces that have historic significance to the Black community in Richmond. Sadly, many of those spaces have been destroyed. I plan to continue my work and collaborate with others to recreate digital representations of the neighborhoods that were destroyed during the urban renewal period. My Dad keeps mentioning Parkwood Avenue, so that will be my next area of focus.

Lessons learned from my winning research: Do not be afraid to take a chance. I am a perfectionist and came very close to not entering my map into this competition because of the notion that I needed it to be perfect. I am grateful that I did not get in my own way.

How I start the day: I love to meditate and sit outside — weather permitting — first thing in the morning. If I can get centered before starting any project, reading the news or checking my email, then it will be a productive day.

A perfect day for me: Any day in which I can detach from the internet and social media and spend time in nature, which usually means going to the river. It is a way to escape without having to travel very far.

Something I love to do that most people would never imagine: I love crocheting! It is a skill my Grandma taught me and it has come in handy. When I had more time, I used to do craft shows back in the day.

A quote that I am inspired by: Do unto others as you would like them to do unto you.

My friends describe me as: Calm, kind, hard-working and determined.

The best thing my parents ever taught me: I can do anything that I set my mind to.

The person who influenced me the most: Both of my late grandparents, Robert and Marcella Gray. They experienced trials and tribulations that I can never fathom, yet there was a grit, determination and an unwavering sense of hope that they both possessed, which lives in me. I hope that I am making them proud — wherever they are.

Favorite poet and why: My childhood was a bit rough and reading was my way of escaping. Maya Angelou’s poems, particularly, “Still I Rise,” gave me a lot of inner strength growing up and I still refer to them today.

Book that influenced me the most: “Fahrenheit 451” by Ray Bradbury. I love sci-fi and it blows my mind that what Ray Bradbury imagined as futuristic technology in the 1950s we are essentially experiencing today! This book also warns of the perils of too much of a reliance on technology, as well as a decline in critical thinking and civility, which is relevant today.

What I’m reading now: I am re-reading “The Color of the Law: A Forgotten History of How Our Government Segregated America” by Richard Rothstein. I heard Richard Rothstein speak at VCU. His work greatly inspired and informed my research and digital map.

Next goal: To start a community conversation on the impact of urban renewal and redlining in the city of Richmond as well as across the Commonwealth. The devastating impact of urban renewal is relevant and still felt today. During my time of working on the city’s master plan, I was amazed with how difficult it was to get people to talk about urban renewal, as well as the continued displacement of people of color in the city today. It is the elephant in the room that needs to be discussed if we are going to have the monumental change that we truly desire.