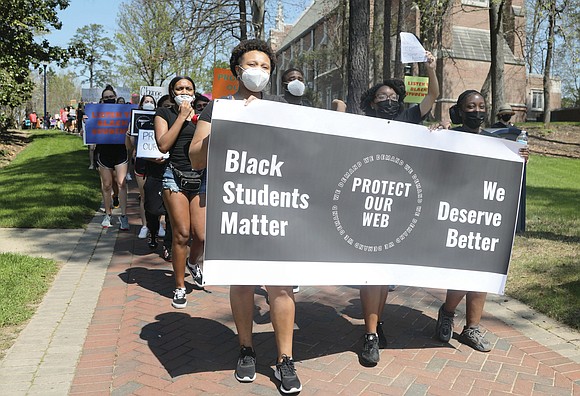 More than 100 University of Richmond students, along with faculty and staff, march Wednesday in a demonstration led by the Black Student Coalition calling for the names of Rev. Robert Ryland and Douglas Southall Freeman to be removed from campus buildings. Photo by Regina H. Boone

Students are pulling out of campus organizations. Alumni, including a 7,300-member alumni Facebook group, are halting donations. And the faculty Senate has censured the board chair or rector.

The University of Richmond’s Board of Trustees is feeling the heat over its decision to keep buildings named for two white men who were instrumental to the school’s development but have gained pariah status on campus because of their ties to slavery and the promotion of racial segregation.

On Monday, the 25-member board announced that it would suspend its controversial decision to keep an academic building and a dorm named for the two controversial though long-dead individuals, the Rev. Robert Ryland and Douglas Southall Freeman.

In a conciliatory statement, the board noted that “our interest all along has been to chart a path that was honest about our history and respectful of the varying views in our community. We respect the deep con- victions about these issues among faculty, staff, students and alumni, and we accept that our process and the proposed decision have not achieved our objectives.

“The board has decided to suspend the recent naming decision. The board is review- ing options for a broader, more inclusive process to determine how decisions are made about questions of renaming, and we expect to communicate our plans shortly.”

Not everyone is convinced.

One is Christopher Wiggins, a 2003 graduate and member of the alumni Facebook group, which announced a boycott of the university’s annual 36-hour Giving Day to show solidarity with the call by students, faculty and staff who want the Ryland and Freeman names removed.

That donation boycott spread, and on Tuesday, the university was forced to suspend the fundraising campaign that brought in $1.55 million last year, but had received only one $25 contribution after the donation portal opened following months of marketing.

Students led a protest on campus Wednesday, supported by faculty and staff.

Mr. Wiggins told the Free Press that he is “cautiously optimistic that the message being sent by students, faculty, staff and alumni is finally being heard” by a previously intransigent board. But he said he is disappointed that board is pushing any decision past graduation and the close of the spring semester when most students will not be around.

Still, the board’s announcement, which follows two months of protests at the nearly 4,000-student school, appears to many to signal that the board of the private liberal arts school is no longer wedded to keeping the names.

Rev. Ryland has long been a university hero. UR traces its roots to a Virginia Baptist educational initiative in 1830, and Rev. Ryland, as the first president, built up the fledgling school after becoming president in 1834. He also served as pastor of First African Baptist Church when state law required white pastors of Black churches. But Rev. Ryland also championed slavery, bought enslaved Black people and rented them out to the university, which paid him for their labor. His name is on a wing of an academic building.

Mr. Freeman, a 25-year university trustee and influential rector who was closely involved in the school’s operations, is better known for his powerful backing of harsh racial segregation and the bogus science of racial purity or eugenics in his roles as the editor of a Richmond daily newspaper and as a radio commentator. A dorm bears the name of Mr. Freeman, a Pulitzer Prize-winning historian of the Confederacy and its military leaders.

Since 2019, student government groups have lobbied the board to have Rev. Ryland’s and Mr. Freeman’s names removed, leading the university to take a deep dive into its history.

The board and UR’s first Black president, Dr. Ronald A. Crutcher, came up with a hybrid plan to keep the Ryland name but rename a terrace for one or more of his slaves and to provide more information about them.

In addition, the board planned to keep the Freeman name, but link it with celebrated Black Richmond newspaper editor John Mitchell Jr., who often fought Mr. Freeman’s ideas, by making it Mitchell- Freeman Hall.

That idea fell flat with many on campus and drew fire from the Free Press for trying to put white supremacists on an equal plane with those they sought to oppress.

The naming issue came to full boil on March 26 when the board’s rector, Paul B. Queally, a major donor whose name is on three UR buildings, met with groups of students, faculty and staff.

According to witness reports, Mr. Queally was rude to a Black staff member, which led the faculty Senate to censure him. Black students also found his conduct too brusque.

During the meetings, Mr. Queally was quoted repeatedly as saying the naming issue was settled and also stating that he want to help “Black, brown and ‘regular students.’ ”

In its statement, the board defended Mr. Queally and said trustees who took part in the meetings reported that he, like those who spoke with, were candid and passionate, but that he maintained “a spirit of mutual respect.”

Mr. Wiggins said that Mr. Queally has a track record of disrespectful speech. He said he is among those who want Mr. Queally to step down as rector despite his largesse toward the school.

Dr. Kathleen Skerrett, a UR professor and former dean of the School of Arts & Sciences, said that the board’s defense of Mr. Queally “curdles the joy of the announcement” that the current renaming plan has been suspended.

“Our campus representatives were unanimous in their outrage at what they witnessed and experienced in that meeting,” she stated, citing the rector’s “rude and belittling conduct to a staff representative, who is Black, and to student leaders of the Black Student Coalition.”

She said the controversial exchanges began when Mr. Queally told the student leaders that the renaming decision was final, and she said Mr. Queally did not appear pleased when the staff member stood in solidarity.

The bottom line, Dr. Skerrett said: “Our trustees must repudiate prior decisions to honor men who advanced white supremacy and damaged and dishonored Black people’s lives.”