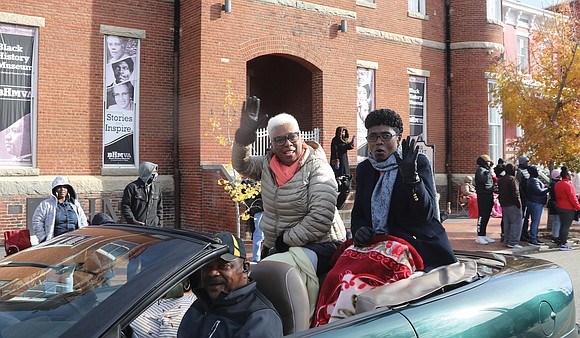 Richmond School Board Chairwoman Cheryl L. Burke, left, and Richmond City Council President Cynthia I. Newbille wave to the crowd as they ride on the back of a convertible in the parade. Photo by Regina H. Boone

Ashley Singleton is many things — a Richmond resident with deep family ties to Church Hill and an educator with the nonprofit Blue Sky Fund.

But what she felt and expressed last Saturday as she joined volunteers on Leigh Street in Downtown for the Armstrong-Walker Classic Legacy was her lasting connection to Maggie L. Walker High School — mascot Green Dragons — where she graduated in 1980.

Members and staff of the Mayor’s Youth Academy carry blown up photos of notable graduates from Armstrong and Walker high schools. Here, they hold photos of former state Sen. Henry L. Marsh III, a 1952 graduate of Maggie L. Walker who served as Richmond’s first Black mayor from 1977 until 1982, and the late broadcast journalist Max Robinson Jr., an Armstrong graduate who became the first African-American network news anchor in 1978.

Ms. Singleton was just one of many alumni and area residents to participate in or attend the parade honoring the 40 years of competitive and community history between Maggie Walker and Armstrong high schools.

“This is like a family reunion,” Ms. Singleton said. “I’ve seen some of my friends, the football players I grew up with, and it’s just awesome.”

Ms. Singleton said her class was the last to graduate with Maggie L. Walker High School on their diplomas, a concession to seniors who wound up in the combined Marshall-Walker High School under a fall 1979 consolidation of the city high schools rather than close some because of low enrollment.

That consolidation plan lasted only until 1986, but many of the traditions from Walker and Armstrong high schools were lost, including the annual Armstrong-Walker Classic, a parade and football game held the Saturday after Thanksgiving. It ran from 1938 to 1978 and drew thousands of fans each year to City Stadium.

While that last game in 1978 was a bittersweet affair, according to Ms. Singleton, Saturday’s new festivities were a warm and welcome sight in the cold morning air. The parade ran westward along Leigh Street, from 4th Street in Downtown to Lombardy Street, where it turned in front of the former Maggie Walker building, now a Governor’s School, and ended a few blocks later at Virginia Union University.

Several hundred people turned out along the route as Armstrong and Walker school mascots, alumni, students, city officials and others joined the festive parade.

Richmond Mayor Levar M. Stoney and his girlfriend, Brandy Washington, wave to the crowd from their perches on the back of a classic Mustang during last Saturday’s parade.

“I’m really enjoying it,” said Ralph Dickerson, an Armstrong alumnus from the Class of 1964, who watched the parade from the steps outside the Walker building.

“I’m a little disappointed that they don’t have representative marching bands,” he said, “but, so far, everything is great.”

Yasmine Crawley had rushed from her job at Bon Secours Memorial Regional Medical Center in Mechanicsville to her Leigh Street home to take in the sights and sounds. Still dressed in red scrubs from work, the former Church Hill resident said she always supported Armstrong in the past and was happy to see the parade and game to return in some form.

The legacy event was organized in part thanks to the efforts of alumni and former staff from both Walker and Armstrong, according to Howard Hopkins, a former coach at Walker and former principal at Armstrong-Kennedy High School. Their contributions could be seen all the way to the parade’s destination at VUU’s Hovey Stadium, where visitors had food and listened to live music as part of a tailgate party. The celebration also extended to the stadium’s Willie Lanier Field, where past Armstrong and Walker high school queens, football players and cheerleaders were celebrated before pee wee football games were held.

Monica Davis Williams of Chesterfield carries her 8-month-old Shih Tzu-Yorkie mix, Seymoure, as she watches for her mother, Mary Carr Davis, a member of the Maggie Walker Class of 1967 and former co- captain of the cheerleading squad, who was participating in the parade.

Glenn Anderson, student activities director at Armstrong High School, looks out on the crowd of tailgaters in the parking lot of Hovey Stadium at VUU from his vantage point in a golf cart.

And while the games were the final part of the day’s festivities, the true focus was the return of the community connection that had been fostered over decades by the Armstrong-Walker Classic, particularly among African-American residents. That focus was something alumni and spectators felt was necessary at this time for the city and its youths.

Tailgaters enjoy a fire pit during the tailgate party on the VUU campus following the parade.

“It just brings back such lovely memories of the camaraderie, the love and the unity that we had as a community,” said Ivy Hutchinson Pleasants, Armstrong High School homecoming queen for 1974-75. “I think it’s good for us to get together as a community and continue this legacy.”

Echoing this sentiment, Mr. Dickerson’s recommendation for the event moving forward was short and succinct: “Community unity. That should be the motto.”

That approach to the event could be seen everywhere, as visitors perused memorabilia from both schools that had been set up outside the stadium. Alumni from Walker and Armstrong reunited for the first time in years, with many people wearing the schools’ colors — green and white for Maggie Walker and orange and blue for Armstrong.

Monica Nicholson of Sandston shakes blue and orange pompomms, Armstrong High School’s colors, where her mother, Janie Preston of Chesterfield, was a cheerleader before graduating in 1960.

Plans already are underway for next year’s event, according to Mr. Hopkins, with hopes to make it even better and the beginning of a new tradition for a new generation of Richmonders.

“We hope to do this again,” Ms. Singleton said. “I hope to see it for many years to come.”