Gov. Northam calls for elimination of state tax on groceries 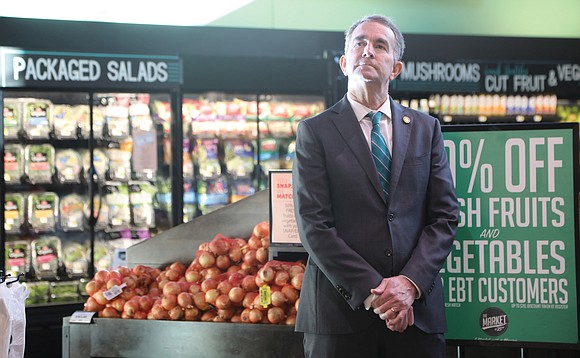 Gov. Ralph S. Northam pauses Tuesday in the produce section at The Market @ 25th in the East End before stepping up to a podium to announce several tax cuts in his proposed 2022-24 budget, including elimination of the state tax on groceries. He was joined at the news conference by State Finance Secretary Joe Flores and state Sens. Joe Morrissey and Ghazala Hashmi. Photo by Regina H. Boone

Virginians would pay a smaller tax on groceries and receive an income tax rebate of up to $500 under outgo- ing Gov. Ralph S. Northam’s budget proposal rolled out on Tuesday.

Gov. Northam, a Democrat, is asking the legislature to do away with the state’s 1.5 percent tax on groceries. His proposal does not eliminate a 1 percent add-on tax by localities.

Virginia is one of only 14 states that taxes groceries.

Gov. Northam announced his proposal at The Market @ 25th, a community-driven grocery store in Richmond’s East End. He first proposed eliminating the grocery tax when he ran for governor in 2017, but it was not a central theme of his campaign.

He said his proposed tax cuts would benefit workers whose jobs in restaurants, child care, factories and other places did not allow them to work from home during the pandemic.

Gov.-elect Youngkin, who is scheduled to take office on Jan. 15, campaigned heavily on the issue, making it part of his “Day One game plan.” The incoming governor argued that the tax is regressive, hitting low-income people the hardest, and he had urged Gov. Northam to include tax cuts in his outgoing 2022-24 budget.

“Gov. Northam’s budget proposal is a step in the right direction but does not entirely fulfill Virginians’ mandate,” said Macaulay Porter, a Youngkin transition aide. “We appreciate the Northam administration laying the foundation for these elements of the Day One game plan so that Gov.-elect Youngkin can hit the ground running on Jan. 15 to begin executing on his key campaign promises and finish the job.”

“Now we know what it takes to get Virginia Democrats to propose cutting taxes — losing to a Republican,” Delegate Gilbert said in a statement.

Delegate Lamont Bagby of Henrico, chairman of the Virginia Legislative Black Caucus, cheered the governor’s tax cut proposal as “the right way to help working people and provide equity in our tax policy.”

“They will receive the same amount of funding that they are currently receiving from the state,” he said.

Mr. Flores said the revenue that would go to transportation projects is not made up for in the governor’s budget proposal, but the state will receive additional federal transportation money under the infrastructure bill passed by Congress last month.

Gov. Northam, who is scheduled to present his budget proposal to the legislature’s money committees on Thursday, also is proposing that the state give one-time “economic growth” tax rebates of $250 for individuals and $500 for married couples; make up to 15 percent of the federal earned income-tax credit refundable for eligible families; and end the accelerated sales tax payments for retailers.

Gov. Northam said Virginia’s strong economic position allows the state to reduce taxes and to pay for other provisions in his budget proposal, including raising salaries by 10 percent for teachers; pay hikes for police and other public safety officers; setting aside $24.7 million to address gun safety through a new Center for Firearm Violence Intervention; and putting $277 in building and operating funds for Virginia State and Norfolk State universities, the state’s two public historically Black colleges and universities. He also proposed setting aside $20 million in each of the next two years to increase affordability at both schools.

Additionally, he proposed a $20 million opportunity fund to provide scholarships at Virginia Union and Hampton universities, which are private HBCUs, and increasing the state’s Tuition Assistance Grants that provide money for students attending private colleges and universities to $5,000, from the current $4,000.

Gov.-elect Youngkin and Republicans in the General Assembly may seek to go further than Gov. Northam.

In addition to eliminating the grocery tax, Gov.-elect Youngkin pledged during the campaign to suspend the most recent gas tax hike for a year; offer a one-time tax rebate of $300 for individuals and $600 for joint filers; cut income taxes by doubling the standard deduction; cut taxes on veterans’ retirement income; and implement a requirement that voters approve increases on local property taxes.