Richmonder Andre Ingram wins on court and on ‘Wheel of Fortune’ 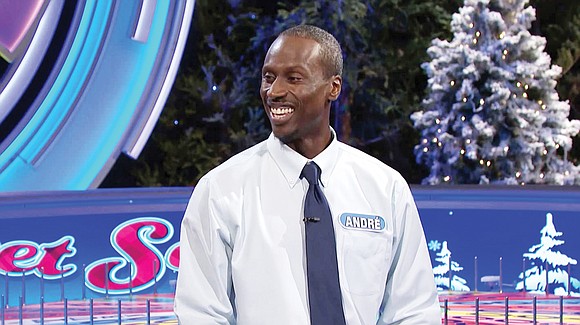 Andre Ingram on the TV game show ‘Wheel of Fortune.’

Andre Ingram’s fans knew he could spin a basketball into a hoop. Now they know he can spin a wheel as well.

Proving to be “spincredible” on the popular TV game show “Wheel of Fortune,” Ingram won $31,750 on Dec. 10 as a guest on a Secret Santa edition.

Ingram then donated his earnings to a random fan of the show that is filmed at Sony Pictures Studios in Culver City, Calif.

“Wheel of Fortune” is a game of quick thinking with some luck involved. The idea is to guess a phrase while getting clues one letter at a time.

The 36-year-old Ingram is no stranger to local hoops fans. He starred at Highland Springs High School in Henrico under Coach George Lancaster, where he led the Springers to the 2003 State Group AAA crown. He also was named AAA State Player of the Year.

Ingram then enjoyed a brilliant career at American University under Coach Jeff Jones, where he scored 1,655 points.

Undrafted out of AU, Ingram has played in the NBA G-League (formerly the D-League) since 2007 and is the league’s all-time leader in 3-point connections, 3-point percentage and total games played.

Ingram is currently on the roster of the South Bay Lakers, the Lakers’ G-League affiliate. He’s hoping for an NBA call-up later this season.