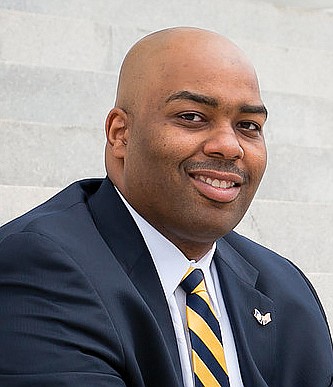 Buoyed by two legislative sessions last year that ushered in huge reforms in voting and criminal justice, the Virginia Legislative Black Caucus is vowing to keep pressing for more change.

The 23-member group unveiled an ambitious package of legislation as the new session of the General Assembly opened Wednesday. The session will be limited to just 30 days at the insistence of the Republican minority.

With only a short time to get bills passed, the caucus will be “laser focused” on pushing legislation that “will impact individual lives in

every corner of the Commonwealth,” said Henrico Delegate Lamont Bagby, chair of the VLBC, as he joined members in talking up the bills they will be supporting.

A sampling of the array of bills that caucus members will be seeking to get passed before the scheduled Thursday, Feb. 11, adjournment:

• Legalize recreational use of marijuana, with tax dollars generated by sales going to benefit Black and brown communities hardest hit by enforcement and to beef up and expand public pre-school programs;

• Provide paid leave for workers on furlough due to the pandemic;

• Abolish the death penalty and the habitual offender statute;

• Provide automatic expungement of criminal records for those who have had no additional convictions in eight years; and

• Install stronger protections against eviction, increase funding for rental and mortgage relief, expand state financial support for development of much-needed apartments and homes that carry lower rental and sale price tags and authorize a tax credit for those creating such affordable housing.

With Democrats in control of both the House of Delegates and the state Senate, passage of Gov. Ralph S. Northam’s bill to legalize small amounts of marijuana for personal use is regarded as likely to pass.

Two veteran Caucus members, Sen. L. Louise Lucas of Portsmouth and House Majority Leader Charniele Herring of Alexandria, are carrying the legislation in their respective houses with the aim of ensuring benefits for the Black and brown communities most harmed by zealous enforcement of marijuana possession laws.

Their bills would allow people to buy and possess 1 ounce of marijuana – enough for 50 to 80 smokes, according to experts.

Sen. Lucas said the bill also would include purging criminal records for those convicted of marijuana possession offenses and ensure that licenses to grow, process and offer marijuana at retail sale would be open to Black entrepreneurs.

She said that the bill also calls for steering tax dollars generated by marijuana sales to pre-kindergarten programs to expand service to 20,000 low-income children, with another chunk of the dollars going to a state fund that could be used for investments in Black and brown communities to help remediate the harm zealous policing of marijuana has caused.

“This is a once in a lifetime opportunity,” Delegate Bagby said, “to structure a program that would provide a fair share to Black growers, businesspeople and the community. We need to get this right.”

Delegate Herring also touted the broader expungement bill she is carrying that she said would eliminate from criminal records “most misdemeanor convictions and drug felonies” that block people from getting jobs, gaining housing or accessing capital.

Delegate Herring said a report from the state Crime Commission that provided guidance on structuring the language means this legislation “is fully vetted and could get across the finish line” during the session.

Newport News Delegate Marcia Price, who will chair a newly created Voting Rights subcommittee, said that she will be pushing for new reforms to go along with the changes that have already been ushered in, including early voting. Among the reforms is expanding early voting to include Sundays.

Virginia has already moved from No. 49 in voting difficulty among the states to No. 12 among states, thanks to the earlier reforms, Delegate Price said.

To continue the progress, she said her top priority will be passage of a Virginia Voting Rights Act that would cement into state law the protections once available through the federal law that passed in 1965. Those protections would help end any revival of the voter suppression, voter discrimination and voter intimidation that have long plagued the state.

Full legal assurance that “people of color have access to the ballot box” is needed to “protect our democracy,” Delegate Price said.

Richmond Delegate Jeff M. Bourne, who will be pushing once again to end qualified immunity for police officers against lawsuits seeking to hold them accountable for wrongdoing, also will be pushing to ensure people can stay housed.

“We need to strengthen eviction protec- tions and foreclosure protections on homes and mobile homes,” he said, while ramping up investments in affordable housing through the state’s Affordable Housing Trust Fund and through a new tax credit.

said he would be pushing legislation to expand broadband service to underserved areas and to ensure greater protection of consumers’ private information on digital platforms, including barring sale of information without permission.

And Portsmouth Delegate Don L. Scott Jr. is vowing to pursue increased criminal justice reform, including a ban on impris- oning parolees for technical violations. He said that 6,000 prisoners are now being held for such violations even though they had not committed a new crime.

“Folks are being harmed and penalized,” he said for failing to check in with a parole officer and “that needs to stop.”

Richmond state Sen. Jennifer McClellan said she will lead the VLBC push on education, including a proposal to spend an additional $1 billion on public education so school systems can hire more social workers, counselors, janitors and other essential staff needed to support learning.

She also will be pushing to expand a domestic worker bill of rights that was approved last year; to allow abortions to be covered by health insurance; and for middle and high school students to get excused for a half-day each year to participate in a civic or political activity of their choosing.

Sen. McClellan, who is vice chair of the caucus and a candidate for governor, said that she and other members are returning “stronger and more determined than ever” to counter the “lack of faith in government” and show what can be accomplished to make “the Commonwealth more equitable.”