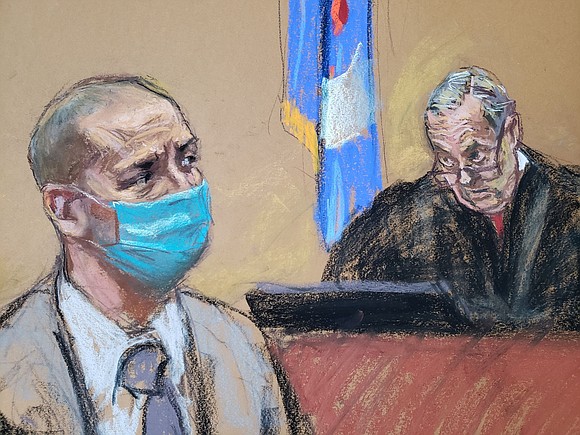 In this courtroom sketch, Hennepin County, Minn., District Judge Peter Cahill presides over the June 25 sentencing hearing for former Minneapolis police officer Derek Chauvin, who was found guilty in April of murder in the death of George Floyd in May 2020. Sketch by Jane Rosenberg/Reuters

That was the sentiment of the late George Floyd’s family members after former Minneapolis police officer Derek Chau- vin was sentenced late last week to 221⁄2 years in prison for the murder of Mr. Floyd in May 2020.

The punishment, announced June 25 by Minnesota Judge Peter Cahill, fell short of the 30 years requested by prosecutors, but is one of the longest prison terms ever imposed on a U.S. police officer in the killing of a Black person.

Still, the Floyd family and others were disappointed.

Mr. Floyd, who was in police custody and put face down in the street with his hands cuffed behind his back, was killed May 25, 2020, when Mr. Chauvin kept his knee on Mr. Floyd’s neck for more than 9 minutes. The scene, including Mr. Floyd’s dying gasps, were caught on cellphone video by a young bystander and led to the biggest outcry against racial injustice in the United States in generations.

At last week’s sentencing, Mr. Chauvin broke his yearlong silence and offered condolences to the Floyd family and expressed hope they eventually have “some peace of mind.”

With good behavior, Mr. Chauvin, 45, could get out on parole after serving two-thirds of his sentence, or about 15 years. Judge Cahill went beyond the 12 1⁄2-year sentence prescribed under state guidelines, citing Mr. Chauvin’s “abuse of a position of trust and authority and also the particular cruelty” shown to Mr. Floyd.

Floyd family attorney Ben Crump said the family had gotten “some measure of accountability” but is hoping Mr. Chauvin gets the maximum sentence at his upcoming federal civil rights trial.