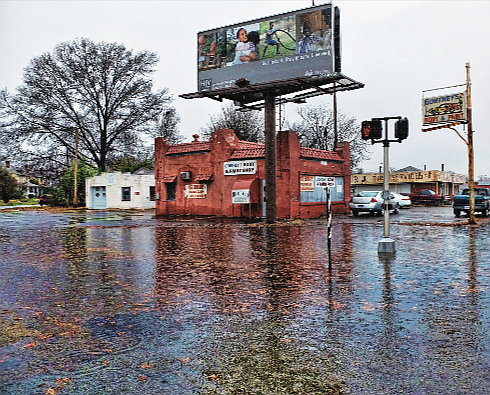 In this file photo, rainwater floods the intersection of Overbrook Road and Lombardy Street in North Side. About one-third of Richmond’s storm drainage is tied into its sewer system, mostly in the East End, North Side and Downtown. Photo by Sandra Sellars

For the first time, City Hall has disclosed that the city is facing a bill for more than $800 million to keep its pledge to end by 2035 the discharge of largely untreated human waste into the James River during heavy rainfalls.

According to the disclosure, the cost of borrowing that much money during the next 14 years to end the city’s pollution of the river would require nearly tripling the monthly charge for sewer service.

The current cost is around $41.70 a month for the average residential customer.

Tripling the fee would have a huge impact on lower-income renters and homeowners in Richmond, particularly in the Black community, which bears a higher share of the city’s poverty.

The letter, dated July 7 and signed by the nine Democratic members of Richmond’s delegation to the General Assembly, urges the governor to carve out $833 million for improvements to Richmond’s sewer system from the influx of $4.3 billion the state is to receive from the federal American Rescue Plan.

The governor has yet to respond, but the delegation is expected to press the issue during the upcoming special session that is to open Monday, Aug. 2, to create a spending plan for using the ARP dollars.

So far, the Stoney administration has not responded to Free Press queries, nor has it made any presentation to the council or the Virginia Department of environmental Quality about the magnitude of the problem.

The VDEQ reported that it has never received any documents projecting the overall cost of system improvements to end the discharges but expects to receive one by 2024 as part of the agency’s ef- forts to monitor city progress on ending the discharges.

The request for $833 million, which was not supported by any documents attached to the letter, would represent a huge increase. That amount is seven times more than the $117 million the Richmond Department of Public Utilities asserts on its website that it is spending to end the discharges.

It is four times larger than the $217 million the city already has spent, according to the city’s approval capital budget for 2022 to 2026.

And it is 13 times larger than the $63 million the city plans to invest through 2026 to reduce the polluting discharges.

Richmond’s problem stems from what is called its combined sewer overflow system, or CSO.

Like Alexandria, Lynchburg and hundreds of cities elsewhere, Richmond is facing a problem because at least a century ago it connected its stormwater system into its sewer system. It did so when discharging waste into rivers was a common practice.

Today, about one-third of Richmond’s storm drainage is tied into its sewer system, mostly in the East End, North Side and Downtown, according to the city Department of Public Utilities.

The trouble comes when a surge of rainwater floods into the sewer system. In the CSO area, and an inch of rain can create more than 300 million gallons of water, which overwhelms the existing storage and treatment capacity and leads to discharges of waste from 25 outflows, which inject disinfectant to reduce the impact of the waste on the river.

Municipal waste discharges became an issue in the 1970s with the creation of the Environmental Protection Agency, which began demanding change.

In 2005, Richmond signed a consent decree with VDEQ to make improvements, a longer timeline than Alexandria and Lynchburg, which are spending heavily to meet their 2027 deadline.

Richmond has come a long way in the past two decades. That includes expanding the capacity of its wastewater treatment plant to handle larger volumes and installing underground storage in Shockoe Bottom and in its Downtown canals to hold more rainwater.

During the next five years, Richmond plans to install improvements to its existing system and add more storage by installing huge pipes in the city’s James River Park.

But as the letter notes, far more would need to be done.

Without a state bailout, ratepayers who already grouse about the cost of city water and wastewater can only expect to see their bills continue to rise.