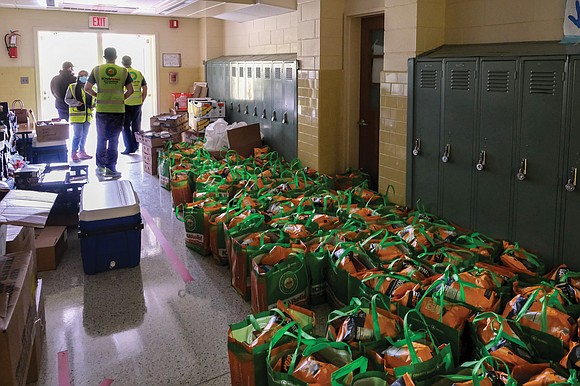 Tote bags filled with food and staples line the hall of Quioccasin Middle School, where volunteers with ICNA Relief and Henrico County Public Schools helped distribute them Saturday to more than 100 families in need who picked up the bags curbside. Photo by Sandra Sellars

Protected from the showers under the large canopy of the school’s bus zone, volunteers with the Richmond Chapter of the Islamic Circle of North America Relief and Henrico County Public Schools worked to load tote bags filled with fresh vegetables, chicken, canned goods, bread, doughnuts, hand sanitizer and soap, masks, toilet paper and other staples into the waiting vehicles of more than 100 area families in need.

It was a demanding start to the new endeavor, but one that showed the commitment of all parties involved.

“We’re prepared for all sorts of weather—rain, snow, sleet, shine. We’re here,” said Hamna Saleem, state outreach coordinator for ICNA Relief, a nonprofit organization providing a network of shelters, food pantries, health clinics and refugee and disaster relief services across the United States. “For us, really being there and present for the community matters.”

The seeds of the new initiative began with ICNA Relief, which has been running a food pantry in Henrico for more than a year. ICNA organizers reached out to the Henrico school system’s Office of Equity, Diversity & Opportunity about helping to address the ongoing issue of food insecurity for many area families.

From there, Quioccasin Middle School in Western Henrico was chosen as a food distribution site because it already was being used for similar school lunch distributions, is designed in a way that makes curbside pickup easier and safer, and carries a sense of familiarity for the families that would come for help, organizers said.

The school, which has a large number students for whom English is a second language, also helped spread the word about the food giveaway in multiple languages to community members needing help.

The curbside food distribution program is set to run every third Saturday of the month at the middle school until September.

While some families registered for help ahead of Saturday’s kickoff, volunteers were more than happy to provide groceries to anyone who came.

“I’m really impressed with the organization and everything that they brought out,” said Letitia Beasley, who works with the school system’s equity, diversity and opportunity office. “We have poultry, we have bread, we have vegetables. So they’re getting a lot of food that should last them for two weeks.”

Ms. Beasley and Melanie Phipps, principal of Quioccasin Middle School, helped unload the food and goods brought to the school by the ICNA and then load it into the cars of families. The tote bags had been packed the day before by ICNA Richmond with the help of children.

Ms. Saleem said every distribution is special to the ICNA.

“Every distribution is important to us because we know that we’re reaching the community that needs it,” she said. “That’s our main goal — making sure the people that need it feel comfortable coming, and I think we’ve accomplished that.”