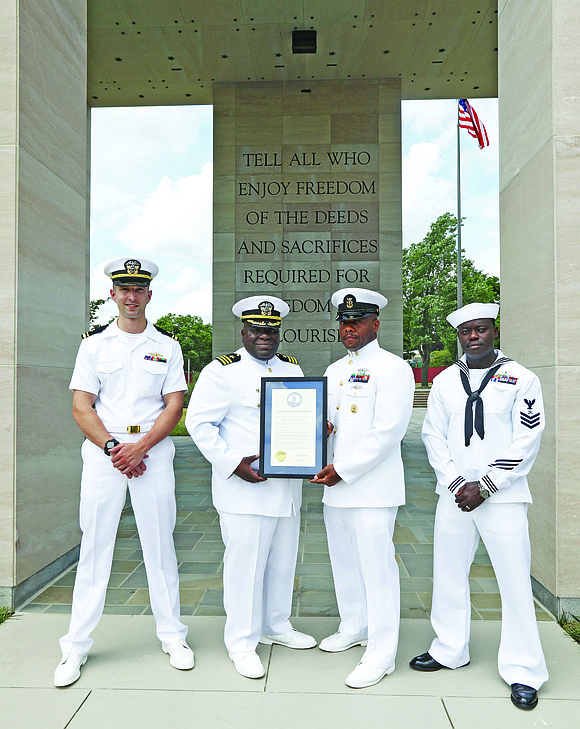 The late Adm. Samuel L. Gravely Jr., a Richmond native who was the first African-American to reach the rank of admiral and the first African-American to command a U.S. Navy fleet, was remembered and honored Wednesday during a ceremony at the Virginia War Memorial commemorating the 50th anniversary of his promotion to the rank of admiral. As part of the ceremony, Gov. Ralph S. Northam issued a proclamation designating June 2 as Adm. Samuel L. Gravely Jr. Day in Virginia. Holding the proclamation is, second from left, Cmdr. Corey Odom, commander of the USS Gravely, an Arleigh-Burke class destroyer based in Norfolk that was commissioned in 2010 honoring Adm. Gravely. He retired from the Navy in 1980 and died in 2004 at age 82. His niece, Laurette Cain Johnson Turner, spoke at the ceremony held by the Richmond Council of the Navy League of the United States to recognize Adm. Gravely’s remarkable achievements in breaking down color barriers in the military. Joining Cmdr. Odom are, from left, Lt. j.g. Connor Partlow, Command Master Chief Dion Dupree and RS 1st Class Victor Nyarko.