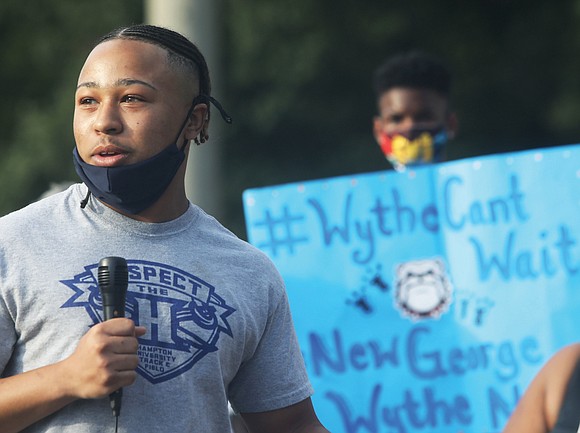 Jeremiah Armstead, 15, a rising junior at George Wythe High School, tells people at a community meeting last Friday that he often is too embarrassed to say where he attends high school because of its reputation of being old, decrepit and forgotten. He said he hopes the School Board will work with the city to build a new school before he graduates. Photo by Regina H. Boone

Students, parents, community members and leaders met in the grandstand at George Wythe athletic field last Friday to call for the School Board to accept Mayor Levar M. Stoney’s desire to collaborate with the city in building a new George Wythe High School as soon as possible.

The newly formed Richmond Community Coalition, a group of organizations and citizens, put together the meeting in response to the School Board’s decision in April to seize control of school construction projects without collaboration with the city.

The coalition was formed to promote community engagement, to look out for the best interests of RPS students south of the James River and to hold School Board members accountable for their actions.

“Nothing could be more urgent than giving our children the education they deserve,” James E. “J.J.” Minor III, president of the Richmond Branch NAACP, told the community members. “The students and school community of George Wythe High School have already had to wait far too long to move into a new building.”

In Mr. Minor’s estimation, what is happening between the School Board and the city is just another hurdle in a years-long battle to replace the 61-year-old building. He said the process has been ongoing since 2002.

Mayor Stoney received loud cheers and applause on Wednesday morning when he spoke in person at George Wythe’s graduation ceremony at The Diamond.

He lauded the Class of 2021 for its resilience during the pandemic and said he would be remiss if he didn’t mention their resilience in attending school “for three years in one of the worst facilities in Central Virginia.”

“Let’s work together to make sure your brothers and sisters won’t have to endure the same thing at an old George Wythe. Let’s give them a new George Wythe,” he said to cheers.

After the board voted 5-4 in April to take control of school construction, RPS Superintendent Jason Kamras provided the board with a timeline showing that their taking charge would push the opening of a new school from 2024 to 2027.

Mayor Stoney offered a compromise on June 15, by ordering the city to move forward with a request for proposal for designs for a new building. The RFP was issued on June 16, with Aug. 2 as the deadline to respond.

According to the mayor, the procurement action does not deny the School Board’s ability to build their own schools. The city is simply getting the process started by initiating the procurement process and identifying potential design services firms.

The City of Richmond has committed $100 million to build a new George Wythe High School, with its targeted opening date of the fall of 2024.

Mr. Stoney also extended an olive branch by inviting the School Board to join the city in getting a new high school built as soon as possible

With that in mind, community advocates at last Friday’s meeting called for the School Board to do the right thing for students by compromising and working with the city.

Brenda Parson, a longtime South Richmond resident, said she is worried that school reopening in the fall would be a major distraction for RPS officials and would take away from the time to do an effective job on building a new school.

“We have a superintendent who should be concerned with the education of our children, getting the curriculum and classes together as well as hiring teachers, principals and other support professionals—not building schools,” she told the crowd.

Ms. Lynch said the city received no response from RPS policymakers to its request to meet with the School Board on the issue. Ms. Page thanked people for attending the outdoor meeting, saying the turnout “shows the importance of this pressing issue. We, as a community, must move forward working in collaboration with the city.

“This impacts, not only George Wythe, but Woodville Elementary and all of the other schools in need of new construction as part of the district’s facilities plan,” she said.