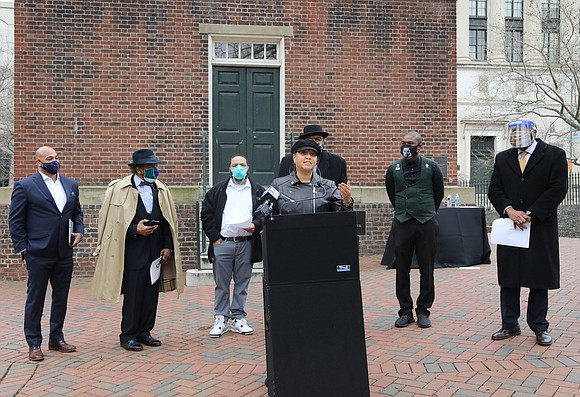 A coalition of more than 40 state and local community and religious organizations are looking to make Virginia the beginning of a nationwide campaign for mass clemency.

Their first mission: Advocating for the immediate release of a model inmate from prison.

The inmate, Robert “Wize” Green, is the focus of the Century of Mass Clemency Movement’s Save Robert Green Coalition, which started Jan. 1 and continued with a rally Wednesday afternoon at the Bell Tower on the grounds of Capitol Square in Downtown.

The coalition is requesting Gov. Ralph S. Northam issue a conditional pardon for Mr. Green, which would immediately bring about his release.

“There may be others equally qualified, but there’s no one more qualified than Brother Wize Green,” said the Rev. Emanuel C. Harris, president of the Baptist Ministers’ Conference of Richmond and Vicinity.

Rev. Harris also serves as co-chair of the initiative to free Mr. Green, along with the Rev. Madeline McClenney, founder and president of the Exodus Foundation.

Mr. Green was 19 when he was sentenced in October 2000 to 35 years in prison for non-violent offenses. In the 20 years since, he has saved and bettered the lives of his fellow inmates, including helping with re-entry training and preventing an attempted suicide.

However, Mr. Green’s repeated requests for a pardon have been denied, despite positive testimonies from state corrections officials, reports showing he has a low chance of recidivism, and Mr. Green now serving as a paid trainer and mentor for other inmates at 43 cents an hour.

Speakers talked about more lenient sentences given to white people convicted of similar crimes and the threat of COVID-19 infection at the prison where Mr. Green is being held as additional reasons for quick and decisive action by the governor.

Among the community and religious leaders attending the rally were Patrick Graham, senior policy adviser in Richmond’s Office of Community Wealth Building; the Rev. Lester Frye, pastor of the Healing and Living Waters Ministry and vice president of the Baptist Ministers’ Conference; and the Rev. Charles L. Shannon III, president of Faith Leaders Moving Forward.