Texas Hold ‘em poker games taking place in South Side at Pop’s Bar & Grill, whose co-founder is chairman of the Virginia Charitable Gaming Board 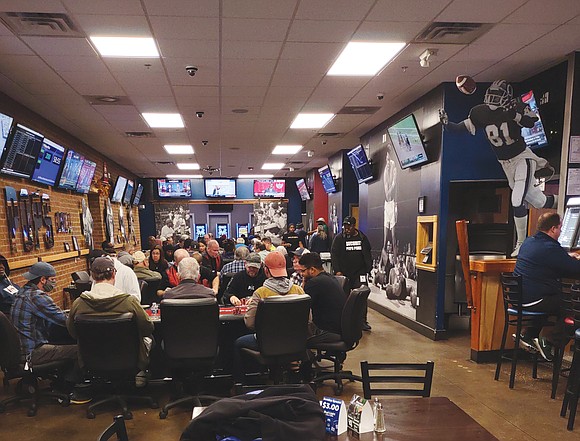 Casino-style gaming is still going strong in Richmond even after voters turned down an actual casino-resort in the Nov. 2 referendum.

Most people have heard of Rosie’s Gaming Emporium on Midlothian Turnpike, a satellite of the Colonial Downs horse racing operation in New Kent County.

That Richmond location is drawing crowds with its slot machine-style gaming based on old horse races. Wagering at the site is likely to top $1 billion this year, according to state reports.

But there other ways people can get their gambling fix, aside from the lottery and sports betting.

Some gas stations and convenience stores are testing different kinds of slot machine-style games that appear to skirt the state law that banned so-called “skill games.”

Those “skill games” were slot machine-style games that required two pushes of a button before a win or a loss was recorded. They were popular before being outlawed July 1.

The new digital machines, called pull-tabs and pre-reveal, look like slot machines, but employ different methods than the real thing for determining winners. So far, authorities have not stepped in to stop play.

The electronic pull-tab game has a fixed and preset quantity of chances to win, while pre-reveal games allow the player to view in advance every outcome that would provide a win.

But the biggest new thing is the cash poker games going on at Pop’s Bar & Grill, a mile or so away from Rosie’s off Midlothian Turnpike.

The bar and grill began offering the cash games Sept. 9 under the name Pop’s Poker. Pop’s Poker attracts a steady stream of players for the live tournaments offered four days a week and for the slot machine-style pull-tab games that also are on site.

The restaurant-poker lounge is located next door to Pop’s Bingo World, a bingo hall in the 200 block of Giant Drive.

Charles “Chuck” Lessin is the principal officer of The Jerusalem Connection, a charity that has operated Pop’s Bingo World since the early 1980s with a state permit.

Mr. Lessin also is involved in the cre- ation of for-profit sports bars under the name Pop’s Bar & Grill in Richmond and Lawrenceville, state records show.

On his LinkedIn page, Mr. Lessin also lists himself as the co-founder of Pop’s

Bar & Grill of Richmond LLC, which he describes as the ultimate sports bar with 63 screens offering sports all the time, along with events featuring live music and a DJ.

His description does not mention cash poker games, although other internet sites list Pop’s Poker as offering Texas Hold ‘em, a popular type of draw poker.

As detailed by the staff managing the poker play, the cash games are offered 12 hours a day Thursdays through Sundays, with the minimum entry to play being $100, plus a $5 fee. Pop’s Poker also collects a percentage of each pot to cover the cost of the operation and to provide donations to charity, the staff said.

Whether the poker games are allowed under Virginia law remains a question.

Mr. Lessin also turns out to be chairman of the Virginia Charitable Gaming Board, the state’s bingo regulator and an arm Virginia Department of Agriculture and Consumer Services, or VDACS. Charity poker games apparently would fall under the board’s purview.

Mr. Lessin responded to a Free Press call, but said he was not available at that time for comment.

In response to a Free Press query, VDACS spokesman J.M. “Mike” Wallace II stated that VDACS “has not issued a charitable gaming permit to conduct Texas Hold ‘em poker tournaments to any entity or organization.” That includes Pop’s Poker.

Asked if poker could be offered under the Pop’s Bingo World license, Mr. Wallace provided a copy of state Charitable

Gaming Board permits that authorize The Jerusalem Connection, aka Pop’s Bingo World, to offer bingo and to operate the electronic pull-tab machines.

“The permit for Pop’s Bingo World does not include ‘Texas Hold ‘em poker,’” Mr. Wallace stated.

Mr. Wallace noted the General Assembly passed a bill authorizing the state Chari- table Gaming Board to write regulations for organizations to offer charity poker play but then included an amendment in the budget bill that barred the board from doing so. So, he stated, the regulations remain in limbo.

Pop’s Bar & Grill has an Alcoholic Beverage Control license. Taylor Thornberg, spokesperson for the state ABC Department, stated that the policy of the department’s chief law enforcement officer is to work with other local and state agencies “to determine if the activity is illegal” if an ABC agent observes gambling in a licensed establishment.

Mr. Wallace also referred a reporter to the commonwealth’s attorney as the local enforcer of state gambling laws. Richmond’s chief prosecutor, Colette W. McEachin, said her office “is not aware of any cash poker games being offered in the city.”

She added that anyone with information about suspected illegal gambling should properly report that to Richmond Police to investigate.

As it turns out, the Richmond Police Department already is aware of Pop’s Poker and considers the operation legal enough to allow off-duty officers to be hired to provide security.