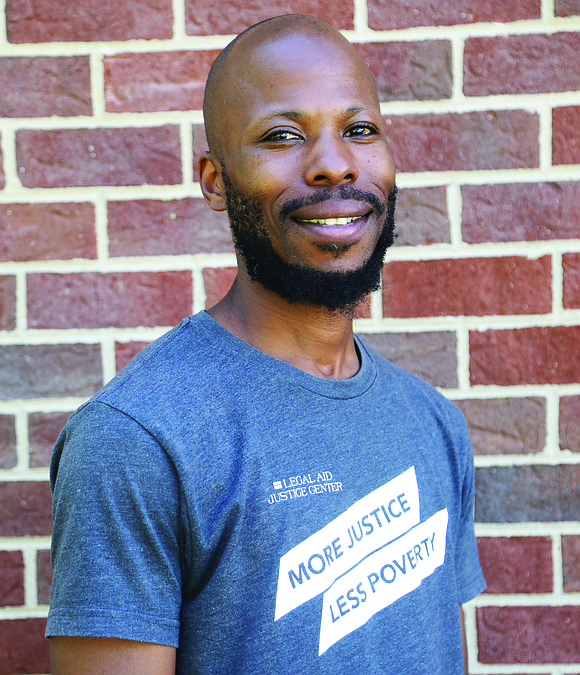 During a time where millions of people remain at risk of eviction in a pandemic, in a city that gained notice nationally for the second highest eviction rate in the country before COVID-19, Omari Kijana Al-Qadaffi has been a constant presence as a community organizer and housing advocate.

Recent weeks have seen Mr. Al-Qadaffi receive further attention for his efforts, for better and worse.

Last month, the Richmond native was awarded a special Housing and Racial Justice Commendation from the National Housing Law Project, with the organization noting “his courageous and sustained work on behalf of tenants and communities of color and for his unflagging advocacy for housing and racial justice.”

“I’m still in awe,” Mr. Al- Qadaffi says. “I have respected this organization long before I was acknowledged by any institution for my work. It’s like performing on the corner and doing free shows for years and then winning a BET Award.”

Mr. Al-Qadaffi cites his past experience living in an East End apartment as a key part of his development as a housing organizer. The combination of unsafe and unhealthy conditions, an exploitative landlord and elderly residents who didn’t know their rights as tenants left him angered. The situation also inspired him to make a difference in his community’s fortunes.

In addition to his work with the Legal Aid Justice Center, Mr. Al-Qadaffi founded the Richmond Food Justice Alliance and Leaders of the New South, which allow him to focus on and address a wide range of societal issues.

His advocacy has led him to the chambers of the Virginia General Assembly to testify in support of tenant protection bills and taken him to communities facing food inequity to kick-start urban farming. Across Richmond, he has provided tenants with housing rights education, helped foster participation in Richmond Redevelopment and Housing Authority meetings and assisted in protections from eviction and housing discrimination on a daily basis.

It’s this breadth of advocacy and aid, particularly in the midst of COVID-19, that earned Mr. Al-Qadaffi special recognition by the national organization.

Mr. Al-Qadaffi’s work has not been without controversy, however. On Monday, Mr. Al-Qadaffi pleaded guilty to trespassing and obstruction of justice in connection with an anti-eviction protest on July 1, 2020, at the John Marshall Courts Building in Downtown that drew many people and ended with a scuffle and a plate glass window being shattered. Sentencing is scheduled for December.

For his part, Mr. Al-Qadaffi sees the commendation awarded in part because of the consequences he sometimes has incurred as an organizer. The award serves as both an honor and vindication of his work in the city.

“I have definitely been putting in the work for years,” Mr. Al-Qadaffi says, “and I think that NHLP also recognized the personal costs that I have paid along with the trials and tribulations that I face locally, while trying to simply help people maintain dignity and a decent quality of life.”

Date and place of birth: New Year’s Day 1981 in Richmond.

Occupation: Which one? I wear many hats. Most of the time, I’m a community organizer.

Family: I grew up with two brothers and a sister. But I also have another brother and sister here in Richmond.

Reason for special commendation by National Housing Law Project: They noted a series of successful campaigns that I have played a key role in involving housing, transportation and food justice. They also mentioned my 24/7 work of helping tenants.

My reaction to award: I’m still in awe. I have respected this organization long before I was acknowledged by any institution for my work. It’s like performing on the corner and doing free shows for years and then winning a BET Award.

How I became a competitor: I have definitely been putting in the work for years, and I think that NHLP also recognized the personal costs that I have paid along with the trials and tribulations that I face locally, while trying to simply help people maintain dignity and a decent quality of life.

How I developed my passion for housing justice: I lived in the apartments of a great Richmond slumlord in the East End. I loved the community. It was small and tight knit, but we had an oppressive landlord. Many of my neighbors didn’t know their rights, and it angered me to see elderly Black women dealing with the unsafe and unhealthy conditions.

Racial equity and housing injustice: The real estate industry’s profits are largely driven by the displacement of Black populations. It has been that way since colonizers arrived here. On so many levels you cannot have housing justice without addressing the racial capitalism that’s inherent to the housing market.

My involvement in fighting other injustices in Richmond: There are so many, but I am mainly fascinated by the dependencies between housing access, food access and transportation access. I led a campaign that saved several bus routes in Black neighborhoods from being discontinued and led to increased amenities and the creation of a brand new bus route in the East End. I am part of the local food justice movement as the founder and director of Richmond Food Justice Alliance. We are active in food policy advocacy whole collaborating with partners to address community violence, poor nutrition and economic inequality through urban farming.

How others can join the fight:Consistently pay attention to the decision-makers while they are making the decisions.

How I start the day: Listening to NPR.

A perfect day for me is: Staying in bed all day watching streaming apps and ignoring my phone.

Something I love to do that most people would never imagine: Sing karaoke ’90s-era alternative rock songs.

Quote that I am inspired by: “All that a man achieves and all that he fails to achieve is the direct result of his own thoughts... A man’s weakness and strength, purity and impurity, are his own, and not another man’s; they are brought about by himself, and not by another; and they can only be altered by himself, never by another. His condition is also his own, and not another man’s. His sufferings and his happiness are evolved from within. As he thinks, so he is; as he continues to think, so he remains.” — James L. Allen

Friends describe me as: Helpful, sarcastic and smart.

At the top of my “to-do” list: Do some traveling to see friends.

Best late-night snack: Anytime is a good time for spaghetti.

Best thing my parents ever taught me: No matter what you do, somebody is always watching you.

Person who influenced me the most: That’s so hard to say. I generally try to learn something from everyone I meet in life ... but have often said that I’m just like my Dad.

Book that influenced me the most: “The Four Agreements: A Practical Guide to Personal Freedom” by Don Miguel Ruiz.

What I’m reading now: I don’t have time for books. I mostly read nerdy housing reports and case law.

Next goal: To be exonerated from current charges that I am facing.