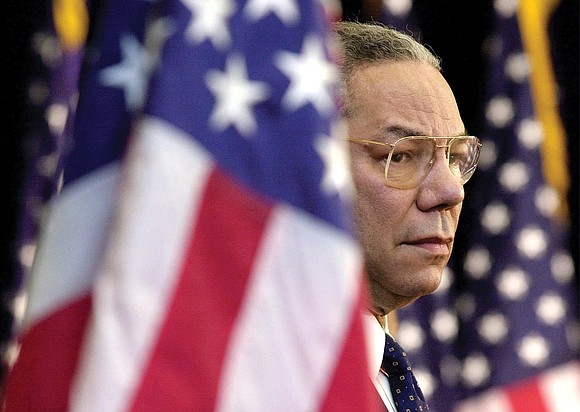 As an American leader, Gen. Colin Powell’s credentials were impeccable: He was national security adviser, chairman of the Joint Chiefs and secretary of state. But his legacy as the first Black person in those roles is murkier, with some African-Americans saying that his voice on their behalf could have been louder.

Gen. Powell, who died Monday, Oct. 18, 2021, at age 84 of COVID-19 complications, spent 35 years in the Army and rose to political prominence under Republican Presidents Ronald Reagan, George H.W. Bush and George W. Bush. His stature fueled persistent speculation that he would one day run for president as a member of the GOP.

Through it all, Gen. Powell never seemed entirely comfortable talking about race, said Kevin Powell, a New York-based writer and rights activist who is not related to the late general.

“I think that’s why a lot of Black folks never saw him as a leader. There was never a sense that Colin Powell was one of us,” said Kevin Powell, who met Gen. Powell in the 1990s, when he was often discussed as a potential presidential candidate.

When he did talk about race, his words were measured, as in a 1994 commencement speech at Howard University: “Racism is a disease that you can help cure by standing up for your rights, and by your commitment to excellence and to performance, by being ready to take advantage of your rights and the opportunities that will come from those rights.”

In the years after President George W. Bush left office, Gen. Powell “was largely invisible in a lot of things that happened — Trayvon Martin, Ferguson, George Floyd,” said Kevin Powell, who also is Black. “It was clear that the party he was part of was moving right. I don’t recall him ever saying this party has become nothing more than race mongers.”

Gen. Powell eventually became disenchanted with the GOP and endorsed Democrats for president, starting with President Obama. He also called former President Donald Trump a national disgrace and said he no longer considered himself a Republican following the Jan. 6 storming of the U.S. Capitol.

Gen. Powell’s dignity and composure should not be interpreted as any indication that he failed to understand the struggle of his people, according to Sam Riddle, an Army veteran and Detroit-based political activist.

“He personified a quiet inner strength that we knew he held on the battlefield for America and for Black Americans,” said Mr. Riddle, who also hosts a Detroit talk radio show. “The bullhorns we can use

can be simply quiet competency, integrity and perseverance.”

“Maybe they just disproportionately expect a Colin Powell to do more or be more than he needs to be. It might be one of those deals where he may not have spoken for every Black person, but at the same time it’s OK that he does not,” Dr. Gooding said.

“He may not have been that frontline cheerleader, but that doesn’t mean he wasn’t affected by the struggle,” Dr. Gooding said.