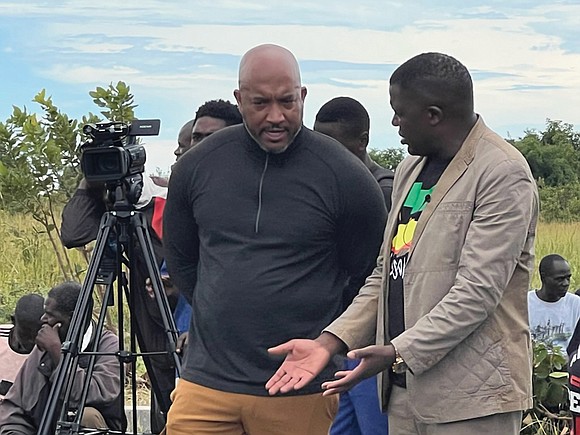 It is not unusual for church members to go on mission trips to provide help and support to those in need in other countries.

However, Dr. Michael J. Jones said he and a small delegation from the Village of Faith Ministries that he led to rural Chibombo, Zambia, may have received as much as they gave.

They took winter coats, corn meal, cooking oil and sugar to the hard-pressed people they found, said Dr. Jones, founder and pastor of the 1,000-member church that has sanctuaries in Henrico and Chesterfield counties.

The delegation brought back important insights about the Zambian community and about the continuing links with America, said Dr. Jones, who also represents Richmond’s 9th District on City Council.

“It opens your eyes,” Dr. Jones said. “It was transformative.”

As a result of the experience, Dr. Jones said he wants to his church involved in regular mission trips to Chibombo.

He also set a goal of ensuring that every high school sophomore in his church takes a similar mission trip to create connections and gain appreciation of their ancestors.

And he said that he will be reaching out to other Richmond area pastors to consider a similar program for youths in their congregations.

The delegation flew to the East African nation on March 20 and returned to Richmond on March 28, he said.

One of the best things about the trip, he said, was the feeling of being home because Black people were everywhere and white people were rare, creating for him “a sense of belonging.”

He said his expectation that Black people in Africa have a uniform color was upended in Zambia, where he saw a variety of shades of skin color, just as in the United States. He said he was told that the variations are natural and were not the product of interaction with the British who once ruled the country or other European inhabitants.

Dr. Jones said he also found that much of the worship in his church that he previously considered Eurocentric was part and parcel of worship in that African farming community located 7,600 miles from Richmond.

Dr. Jones said he got a close-up of that worship connection in preaching a week of revival services at their host church, the Chibombo branch of Shalom Embassy Ministries International, a fast-growing church of 6,000 members that is led by founder Apostle Sunday Sinyangwe and is based in the capital city, Lusaka.

Dr. Jones said singing and dancing were integral parts of the worship experience in Chibombo, along with the call-and-response style of worship that was woven into the service like it is in his own church.

“My goodness,” Dr. Jones said. “What is clear is that the Middle Passage (the name of the horrific voyage to the new world that enslaved Africans were forced to endure) couldn’t kill our culture. We connect to the Motherland in more ways that we think. We are more African than has been understood.”

Dr. Jones said that while he wants to ensure that young people can take a trip that could be life-changing for them in rebuilding links to the continent their forebears came from, most American Black people came from countries that line Africa’s west coast, such as Senegal, Ghana and Nigeria.

He said youths also would see for themselves the tough challenges people are facing in Africa.

Of course, he said plenty of Richmonders and Americans are enmeshed in poverty and the problems that creates.

“But the struggle here is not the struggle there,” he said. “Jobs are scarce, so there is little money.” And there is no government safety net to assist people with food, shelter and retirement pensions.”

The best evidence of a government presence, he said, was the recently repaved road between the capital and Chibombo,

In Chibombo, he said the only vehicles he saw were the cars he and the church delegation rented in Lusaka and drove to the community, located about two hours from the capital.

He said that with winter approaching, his group brought 400 heavy coats that were quickly snapped up.

Representatives from Village of Faith also purchased in Lusaka 100 bags of corn meal that is used to make the traditional Zambian flat bread, he said. With one U.S. dollar equal to 17.5 kwacha, the Zambian currency, the Americans were able to buy far more than they anticipated, he said.

But for those who received a big bag, getting the food home was not easy. He watched one woman hoist the 50-pound sack of meal on her head, wrap it and begin the 2-mile walk to her home.

“We have plenty to deal with at home,” he said, “but reaching back and assisting our cousins across the Atlantic is something we need to be involved with as well.”