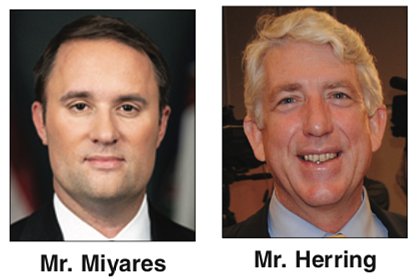 An effort to free two Sussex County men sentenced to life in jail following the 1998 murder of a Waverly police officer continues to face major obstacles after a petition to exonerate one of the convicted men was rejected after months of legal deliberation.

On June 21, a panel of judges in the Virginia Court of Appeals denied a rehearing of Terrence J. Richardson’s innocence petition in a 12 to 5 decision. The petition sought to overturn a 1999 state conviction for the fatal shooting of Officer Allen W. Gibson, and could have paved the way for the reversal of the federal conviction that led to Mr. Richardson’s and Ferrone Claiborne’s life sentences.

New York attorney Jarrett Adams, who represents the families of Mr. Richardson and Mr. Claiborne, had earlier filed a brief on Mr. Richardson’s behalf calling for a rehearing of the petition. The innocence petition was first denied in late June, months after a court hearing, and was first filed by Mr. Richardson in 2021.

Mr. Richardson and Mr. Claiborne pleaded guilty to involuntary manslaughter of Officer Gibson in state court as part of a plea deal to avoid the death penalty. A federal judge would later charge them of conspiracy to distribute drugs in 2001, acquitting them of Officer Gibson’s murder, but handing them life sentences based on their guilty pleas in state court.

It wasn’t until years later that new evidence withheld from Mr. Richardson’s and Mr. Claiborne’s lawyers was revealed, prompting the two men’s attempt to have their convictions overturned.

Their efforts were initially bolstered by the work and presence of former Virginia Attorney General Mark R. Herring, who supported their efforts along with the Virginia NAACP and former Virginia House Delegate Jerrauld C. “Jay” Jones. Mr. Herring submitted a 78-page brief in support of the petition following a months-long investigation by his office’s Conviction Integrity Unit into the case.

“It is clear from the record that some information and evidence presented in Mr. Richardson’s federal trial was unavailable to him when he pled guilty in state court,” Mr. Her- ring said in his petition, “including information that a key witness lied to state investigators and lied during the preliminary hearing.

“No rational fact-finder would have found Richardson guilty had that information been presented in his proceeding in state court,” the petition continues. “The federal jury acquittal is conclusive in that regard.”

In a dissenting opinion to the latest denial, five appellate judges pointed to this sudden change in support from the attorney general’s office, as well as the nature of the convictions

“Richardson’s appeal and petition for rehearing raise several issues of such significance to the full court that it deserves the attention of the full court,” the judges wrote. “For these reasons, the full court should review this case.”

So far, no further action regarding Mr. Richardson’s petition has been seen or filed in the Appeals Court. For his part, Mr. Adams is now drafting an appeal to the Virginia Supreme Court that will be filed within the next two weeks.

“At least five appellate judges found that Mr. Richardson deserved to have his claims heard by the entire appellate court,” Mr. Adams said. “If our system cares nothing about innocence, the fabric of our constitution, which is knitted by due process, comes apart at its seams.”