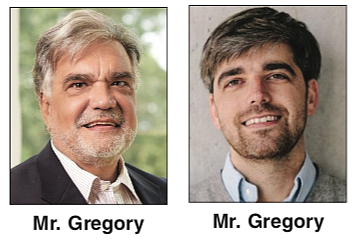 A $55 million apartment complex is being proposed to transform the long vacant Oak Grove Elementary School in South Side – but that plan is facing competition as well as pushback from the neighborhood civic association.

Developers Richard “Rick” Gregory and son John Gregory of Lynx Ventures want to redevelop the school building that neighbors have come to regard as an eyesore since its closure in 2014.

John Gregory said the company is pitching the city to sell the old building and grounds for conversion into 240 apartments and 15 townhouses. The school is located on a block bounded by Joplin and Ingram avenues and Mason and 21st streets.

“We started talking about a year ago about what could be done with the property,” John Gregory said. He said the company advanced a serious proposal in March and has met with various civic associations to showcase the plan.

If the city proves willing to make the deal, the project would be the largest development in decades for the majority-Black Oak Grove neighborhood.

However, Barbara Starkey-Goode, vice president of the 30-member Oak Grove Civic Association, said her organization would oppose having such a large complex developed on the school site. She said it would be out of place in a single-family community.

Ms. Starkey-Goode said she has advocated for the building to be turned into a community center with programming for seniors and youths, and believes the civic group would be far more supportive of a competing proposal from the Redeemer Assembly of Jesus Christ, which also has put in a bid for the building.

The church located nearby on Fairfax Avenue sees the old school building as an ideal expansion space for its school, which is overcrowded and has waiting lists currently. The church also sees the vacant school as providing space for a community center.

City Hall has been mum on any decision, though the apartment proposal would build on an internal goal of increasing affordable housing in the city while increasing tax revenue from underused property.

Separately on the affordable housing front, Gov. Glenn A. Youngkin has distributed $27 million in low interest loans to boost the availability of rental units with lower starting rents and of units for those with special needs in Richmond and other parts of the state to create and preserve 1,990 housing units that offer below-market rents.

The projects being funded in the Richmond area include the $55 million Heights at Bady Square apartment complex that Massachusetts-based Dakota Partners is developing in the 2200 block of Brady Street off Bellemeade Road in South Side.

Dakota Partners is developing a total of 264 units in four phases on the nearly 15-acre property along with two community buildings. The developer is targeting the development to households with incomes of 30 to 60 percent of the area’s median income of nearly $81,000 a year for a family of four.

The company was awarded $1.4 million to support development of phases three and four that collectively will include 132 units.

The Michaels Development Co. out of New Jersey also received a total of $1.4 million to support its renovation and re-development of 204 apartments in former public housing communities that it has purchased from the Richmond Redevelop- ment and Housing Authority.

The properties are in Fulton in the East End, Randolph in the West End and three in South Side, Afton Avenue, Bainbridge Street and the Oscar E. Stovall apartments.

Enterprise Community Housing Inc. also received a $900,000 loan to support its creation of 43 apartments at 1203 E. Brookland Park Boulevard. Those units would be targeted to people with incomes of 40 percent to 60 percent of the area median income. The units would be next door to the 77 units company owns and operates in a former Highland Park school building would be across across the street from a vacant church the company plans to turn into 66 affordable apartments.

The Community Builders also was awarded a total of $1.4 million to support its creation of the first 140 new apartments in Creighton Court. When completed, the units would be available for households with annual incomes of 30 to 80 percent of the area’s median income.

A total 39 units would be for former public housing residents who have been awarded housing choice vouchers for RRHA.